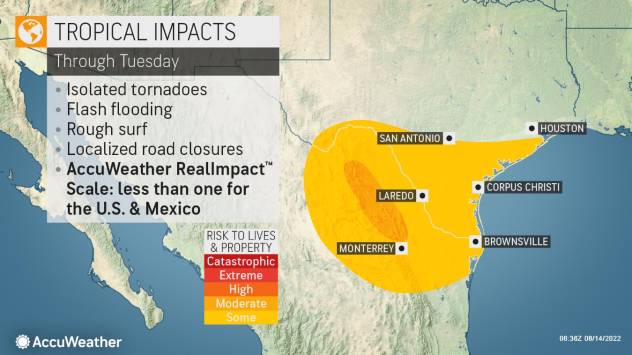 AccuWeather meteorologists warn that an area of low pressure over the western Gulf of Mexico could potentially evolve into a tropical depression before drifting into the Texas coast. But whether it organizes or not, this tropical system is expected to deliver much-needed rainfall and a renewed risk of flooding.

The gathering storm has only a small window of time to develop into an organized tropical system since steering breezes are likely to push the system from the Gulf of Mexico to interior South Texas Sunday morning.

"However, any slightly slower movement inland, by as little as 12 hours, could be enough time to allow the system to develop," AccuWeather Hurricane Expert Dan Kottlowski said.

The development window may continue while this system is just inland of the coast as it will still have access to Gulf of Mexico moisture, but that too will close shortly thereafter. Because of those factors, AccuWeather meteorologists have assigned a low risk for tropical development potential to the system over the western Gulf.

On Friday, the gathering storm was in a favorable environment and located near a zone of moisture that was enhanced by a front stalled near the Interstate 10 corridor. On Saturday, pockets of convection existed across the northwest Gulf of Mexico and Texas coast, although the storm's appearance was much more disorganized in comparison to Friday. On Sunday morning, rounds of rainfall began to push from the Gulf into the southern Texas coast. 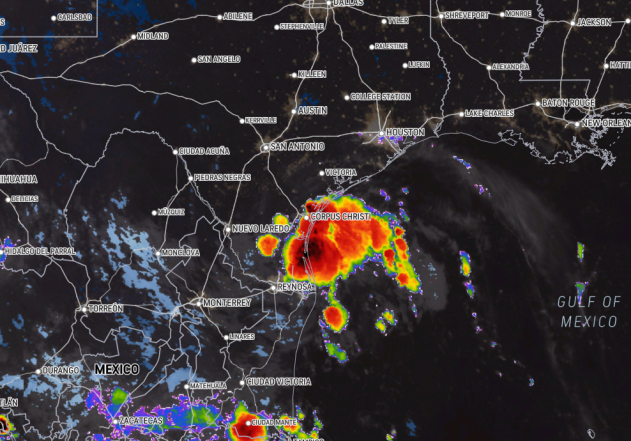 Rain and thunderstorms can be seen pushing from the northwest Gulf of Mexico into Texas on Sunday, Aug. 14, 2022. (AccuWeather/Enhanced RealVue™ satellite)

Conditions are overall conducive for development, including the fact that the system is spinning over very warm water in the western Gulf, Kottlowski said. Wind shear, while not non-existent, is not high enough to inhibit the development of the system.

Beach and boating interests along the Texas coast should exercise caution as the system becomes better organized, forecasters advise. Offshore waves will build and rip currents may increase in strength and number into this weekend. On top of that, there is the potential for waterspouts to form and drift inland.

Whether or not the system becomes a named tropical storm, which the National Hurricane Center (NHC) would call Danielle, there will be impacts to contend with, according to AccuWeather Senior Meteorologist Dan Pydynowski. Drenching showers and gusty thunderstorms will continue to push inland across South Texas.

AccuWeather meteorologists are referring to the system as a tropical rainstorm due to the potential for both drought-easing rain and the risk of localized flooding as it tracks inland into next week. 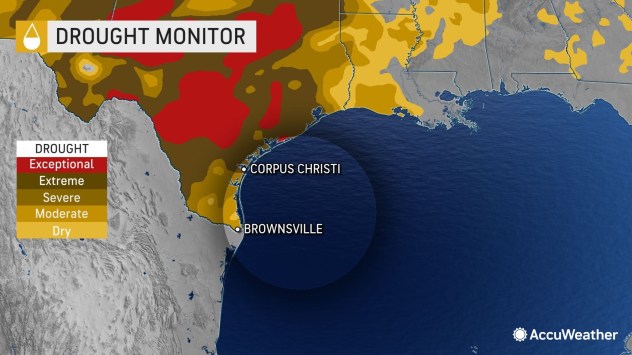 Since June 1, rainfall over South Texas ranges from 10-20% of normal near the coast to barely a few percentage points farther Inland. Laredo, Texas, has received only 0.61 of an inch of rain since the start of June, compared to a normal amount near 4 inches.

A general 1-2 inches of rain is likely with local amounts of 2-4 inches possible. A few locations could receive close to 6 inches. However, rainfall amounts will be highly dependent on the strength and forward speed of the disturbance, as well as its ability to continue to pull Gulf of Mexico moisture inland in its wake.

"The much-needed rain may come at the cost of flash flooding," AccuWeather Meteorologist Brandon Buckingham said. A significant portion of the rain could be dumped in a couple of hours time in some locations. Street and highway flooding is possible. Low water crossings could rapidly become covered by water too deep to travel through, and normally dry stream beds could fill with raging water in a matter of minutes. 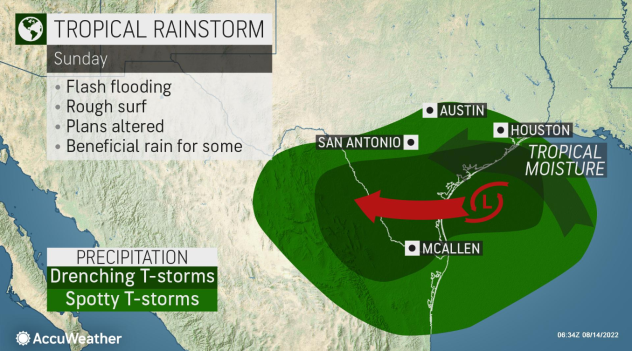 Downpours will tend to focus along the Rio Grande Valley as the storm moves west-northwestward into early next week, but some showers and thunderstorms will occur farther north along the Texas coast, as well as across some of the central areas of the state.

As the storm travels on a west-northwest path, both much-needed rain and the risk of flash flooding will spread upstream along the Rio Grande Valley through part of the Big Bend region and on into West Texas and southern New Mexico early next week. There is a chance the rainstorm could pack enough punch on its travels to lead to a dangerous and life-threatening flooding event in some communities.

The North American monsoon has helped with rainfall in the deserts this summer. Many areas from El Paso, Texas, to Tucson, Arizona, have had 50-60% of average rainfall since June 1. However, more is needed in order to put a dent in the drought.

Farther north, in the zone from Albuquerque, New Mexico, to Phoenix and Flagstaff, Arizona, rainfall attributed to the monsoon has ranged from 100 to 150% of average this summer.

Rainfall around Las Vegas has been two to three times that of normal. The desert gambling mecca was hit with flash flooding for the second time in two weeks on Thursday evening as streets turned into rivers and water cascaded inside of some of the casinos.

"Las Vegas is having its wettest monsoon season since 2002 with 1.28 inches of rain since June 15," AccuWeather On-Air Meteorologist Kristina Shalhoup said. 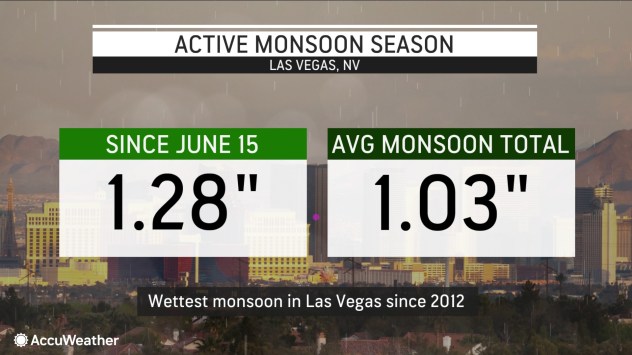 There is also the chance that moisture with the storm survives and brings another pulse of downpours to parts of Southern California later next week.

The middle of the summer is typically a relatively quiet time for the tropical Atlantic. Historically speaking, many years spawn no systems of concern over several weeks during this part of the season. However, should the system near the Gulf coast fail to develop this weekend, and if a system fails to form elsewhere over the Atlantic basin through Tuesday, something that has not occurred for more than 20 years may unfold.

"The last time there were no named storms between July 3, when Tropical Storm Colin dissipated, and August 16 was in 1999," AccuWeather Senior Meteorologist Bill Deger said. That season was marked by a slow start but still churned out memorable and impactful storms such as Hurricane Floyd, which pummeled parts of the East Coast in September.

As the main development region of the Atlantic just north of the equator appears as though it will struggle to generate tropical storms for the next week or so, waters just east of North America may be a zone to watch for tropical trouble.

"A low-pressure area is likely to form and move off the northeast coast of the U.S. this week," Kottlowski said. "That feature looks somewhat similar to Chantal of 2019, which was a short-lived tropical storm that formed over marginally warm water southeast of Nova Scotia." 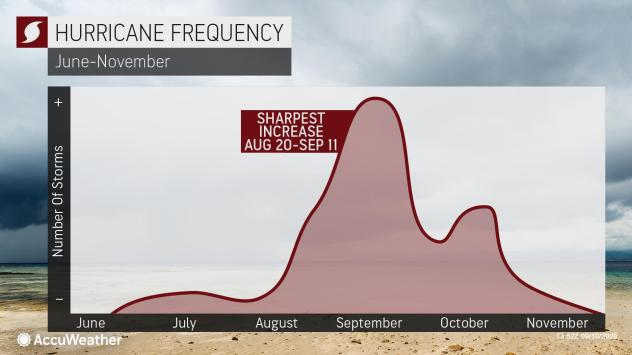 "There is also the possibility of another tropical system that could organize northeast of Bermuda within a couple of days of Aug. 21," Kottlowski added.

Based on climatology, the second half of August typically brings a big uptick in tropical activity as the Atlantic basin awakens from its midsummer slumber.