AccuWeather meteorologists continue to monitor the chances for an off-season tropical or subtropical storm to take shape in the Atlantic basin.

AccuWeather meteorologists continued to monitor the chances for an off-season tropical or subtropical storm to take shape in the Atlantic basin on Wednesday, one week after the hurricane season officially came to an end. If the brewing system takes a name, it will be the first named storm to churn over the basin in December in 15 years.

"An area of low pressure over the south-central North Atlantic Ocean is expected to sit over warm water for much of this week. Due to this, there is concern that the storm can take on tropical characteristics as thunderstorms build near its center," said AccuWeather Senior Meteorologist Adam Douty.

Warm water is one of several key atmospheric ingredients that are necessary for tropical development. 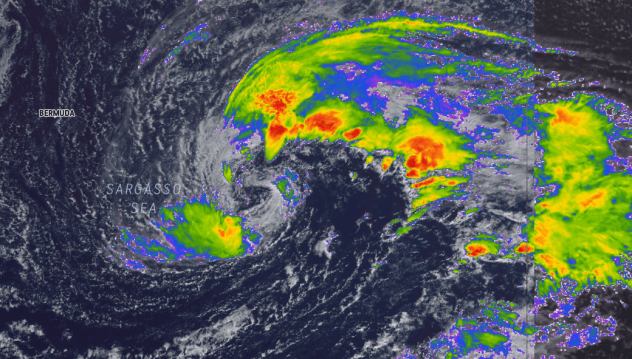 The Atlantic has been quiet since Nicole struck Florida’s east coast as a Category 1 hurricane in early November. Despite the season being officially over, forecasters will continue to use the designated list of names to identify tropical cyclones for the 2022 season. The next name on the list is Owen.

Douty explained that this tropical system is expected to strengthen throughout the week and may become an organized tropical depression or subtropical storm as early as the middle of this week. As of 2:30 a.m. EST Thursday, the system, designated as Invest 99L by the National Hurricane Center, was located over the central subtropical Atlantic, about 850 miles east-southeast of Bermuda, producing a broad area of disorganized showers and thunderstorms.

Compared to a normal tropical storm, a subtropical storm only contains a few tropical characteristics and is usually a broader but less intense storm.

Although this potential storm will not develop near any landmasses, it could still potentially cause some impacts. Rough seas are likely in the center of the North Atlantic Ocean and could impact shipping routes.

"This tropical system is expected to be large, spanning hundreds of miles. As a result, wind and rough seas can extend well away from the center of the storm," said Douty.

Areas most likely to be impacted as the storm traverses the Atlantic this week will be Bermuda and the Azores, an island chain located to the west of Portugal. However, it's possible that rough surf could make it as far west as Florida's Atlantic coast if the storm becomes strong enough. 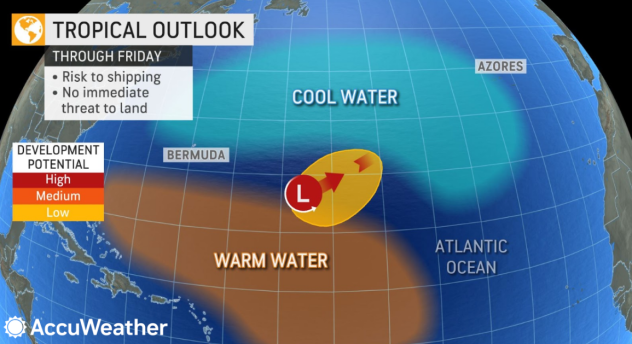 Impacts to the Azores may become even more significant as the budding system creeps closer throughout the week.

"The storm is expected to eventually drift northward later this week and may make a close pass to the Azores. The western islands will be most at risk for tropical rainfall and gusty winds," Douty said.

The cooler waters surrounding the Azores will likely help the system lose wind intensity. Even still, it is not out of the question that some of the energy from this storm could reach parts of western Europe next week, extending the ongoing stormy pattern in the region.

The official Atlantic basin tropical season begins each year on June 1 and continues through Nov. 30. It's during this sixth-month period when the atmospheric conditions in the Atlantic are considered most favorable for tropical development. However, it's not out of the question for storms to strengthen outside of this window.

According to National Hurricane Center records, which date back to 1851, at least one named tropical storm or hurricane has occurred during every month of the year in the Atlantic. However, off-season systems are not as common and do not develop every year.

The last named storm to develop in the month of December was in 2007 when Tropical Storm Olga formed on Dec. 10 in the Caribbean near the Lesser Antilles. Gusty winds and tropical rainfall doused the Caribbean islands over the next several days before it dissipated in the southern Gulf of Mexico. 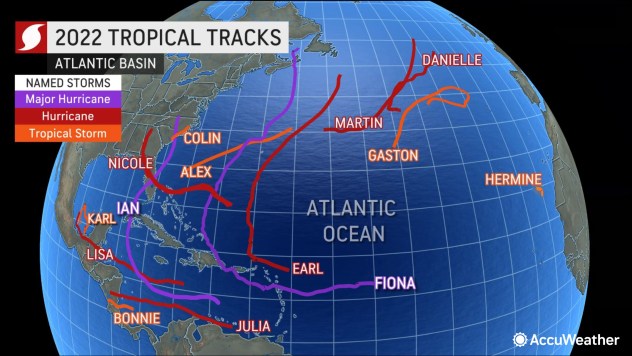 Less than a decade ago, an unnamed subtropical storm formed on Dec. 5, 2013, before bringing wind and rain to the Azores.

In recent years, there have been several preseason tropical or subtropical systems that have formed in April or May. In fact, the 2022 season was the first since 2014 in which no named storms formed prior to June 1. As part of that nearly decade-long stretch, the 2016 season featured rare January tropical activity when Hurricane Alex spun up over the northeastern Atlantic.

Many of the tropical systems that develop between December and May spend most of their lives spinning over the Atlantic Ocean rather than closer to land or in the Caribbean Sea or Gulf of Mexico.