Everything you need to know about monkeypox, including what's currently known about transmission, how prevalent it is and why it's just now making headlines. 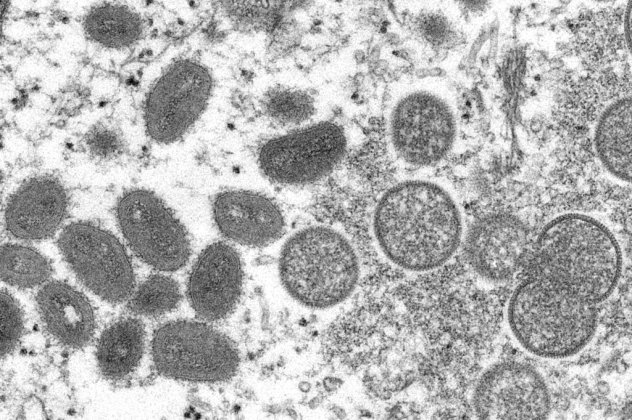 FILE - This 2003 electron microscope image made available by the Centers for Disease Control and Prevention shows mature, oval-shaped monkeypox virions, left, and spherical immature virions, right, obtained from a sample of human skin associated with the 2003 prairie dog outbreak. A leading doctor who chairs a World Health Organization expert group described the unprecedented outbreak of the rare disease monkeypox in developed countries as "a random event" that might be explained by risky sexual behavior at two recent mass events in Europe. (Cynthia S. Goldsmith, Russell Regner/CDC via AP, File)

With the world still trying to mitigate new COVID-19 variants in the drawn-out coronavirus pandemic, the recent outbreaks of monkeypox in at least 12 countries that don't normally see cases of the disease have understandably sparked new concern over possible health implications.

According to surveillance from the World Health Organization (WHO), the United States had between one and five confirmed cases as of Saturday. While that's a relatively small amount of cases compared to several other outbreaks of the virus that parts of Africa have witnessed over the years, the hashtag #Monkeypoxalypse soon began circulating on Twitter and on Monday was among the top U.S trends on the social media platform as concern among the public escalated.

Scientists are still learning about this disease, including the extent of human transmission. But here is what we know so far about this smallpox cousin.

Monkeypox is caused by the monkeypox virus, which belongs to a subset of the Poxvirida family of viruses called Orthopoxvirus. Viruses also grouped into this subset include cowpox and smallpox, making monkeypox related, according to WHO.

While the presentation of monkeypox resembles smallpox, the former is less contagious and causes less severe illness. That's not to say that this virus should be underestimated, however. Of the two clades of monkeypox referred to as the West African clade and Congo Basin clade, the former has a case fatality rate of 3.6% compared to the latter's 10.6%, according to WHO. The U.S. Food and Drug Administration noted that variola major, the severe form of smallpox, had a case fatality rate of 30%.

Like cowpox, monkeypox is a viral zoonotic disease, meaning that it can spread from animals to humans. Unlike cowpox, however, there has been evidence of human-to-human transmission, primarily through close contact with lesions, body fluids, respiratory droplets and contaminated materials such as bedding, according to WHO. SARS-CoV-2 is also zoonotic, though that doesn't necessarily mean that transmission of monkeypox will explode in the same way that COVID-19 did.

Monkeypox has been around since it was discovered in monkeys -- hence the name -- in a Danish laboratory in 1958. The first human case was identified in a child in the Democratic Republic of the Congo (DRC) in 1970, according to WHO.

Since its discovery, human cases have been reported across 11 countries in Central and West Africa, with the DRC recently experiencing an outbreak involving more than 1,200 cumulative cases from Jan. 1 to May 1, 2022, with at least 57 recorded deaths. Cameroon, the Central African Republic and Nigeria also experienced monkeypox outbreaks between Dec. 15 and May 1 this year. While no human cases have been reported in Ghana, the WHO also counts it among the endemic countries due to the animal infections reported.

Why is it making headlines?

So if monkeypox has been around since the 1970s, then why is it making headlines now?

Recorded cases of monkeypox outside of Africa, specifically in the U.S., are usually rare. According to the Centers for Disease Control and Prevention (CDC), monkeypox doesn't occur "naturally" in the U.S., though cases have been previously reported that were associated with international travel or importing animals from where the disease is more common.

However, as of May 21, roughly 92 laboratory-confirmed cases and 28 suspected cases of monkeypox have been reported in at least 12 countries outside of Central and West Africa that typically don't see frequent cases -- referred to as "non-endemic" countries. This includes several European nations, Australia, Canada and the U.S.

No deaths have been reported regarding this group of outbreaks to date, according to the WHO.

The first recorded case this year in the U.S. was on May 18, 2022, when a Massachusetts resident tested positive for monkeypox after returning to the U.S. from Canada, according to the CDC. 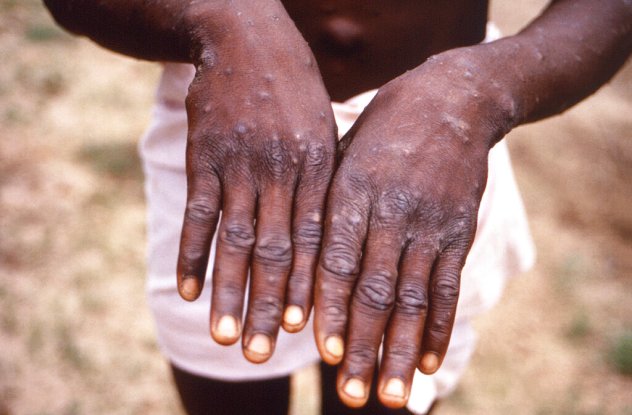 This 1997 image provided by the CDC during an investigation into an outbreak of monkeypox in the Democratic Republic of the Congo, depicts the dorsal surfaces of the hands of a monkeypox patient. As more cases of monkeypox are detected in Europe and North America in 2022, some scientists who have monitored numerous outbreaks in Africa say they are baffled by the unusual disease's spread in developed countries. (CDC via AP)

While monkeypox in the U.S. is rare, that's not to say that it hasn't been detected in the U.S. before. The CDC confirmed two cases of the virus in 2021, one in a Texas resident in July and another in a Maryland resident in November. Both had returned from their respective trips from Nigeria.

The first time monkeypox was reported in the U.S. was in 2003, when a shipment of animals, including various rodents, from Ghana to Texas introduced the virus into the U.S., according to investigators. CDC laboratory testing later showed that a few of the rodents were infected, though not before the animals had been housed near prairie dogs at an animal vendor facility. The prairie dogs were later sold as pets before developing signs of infection.

In total, there were 47 cases of confirmed and probable cases of monkeypox across six states -- Illinois, Indiana, Kansas, Missouri, Ohio and Wisconsin, according to the CDC. A study later conducted showed that activities like touching a sick animal and receiving a bite or scratch that broke the skin were more likely to lead to an infection. Cleaning the cage or touching the bedding of a sick animal were also important factors.

No instances of the 2003 outbreak were attributed exclusively to person-to-person contact, according to the CDC.

How does monkeypox spread?

The reported cases in this recent outbreak have no established travel links to an endemic area, which is unusual compared to cases from over the years, according to WHO. The agency said that it expects more cases in non-endemic areas to be reported with available information suggesting human-to-human transmission is occurring among people in close physical contact with people who are symptomatic.

WHO added that it's still investigating the mechanics of exactly how monkeypox is transmitted, and it likely differs from SARS-CoV-2, the general precautions recommended against COVID-19 are also expected to protect against monkeypox virus transmission in cases of large gatherings.

Transmission via droplet respiratory particles usually requires prolonged face-to-face contact, and WHO stressed that health workers, household members and other close contacts of active cases are at greater risk.

Transmission can also occur via the placenta from parent to fetus or during close contact during and after birth.

It's currently unclear if monkeypox can be transmitted specifically through sexual transmission.

What are the symptoms?

The incubation period, or time from infection to the onset of symptoms, is typically between six and 13 days, though it can range from five to 21 days, health experts said.

The infection itself can be divided into two stages: the invasion period, which may feel similar to the flu, and a period characterized by skin eruptions.

The invasion period may include fever, intense headache, swollen lymph nodes (lymphadenopathy), back pain, muscle aches (myalgia) and a lack of energy (asthenia).

Rashes that form during the second stage tend to be more concentrated on the face and extremities and evolve from lesions with a flat base to ones filled with a clear or yellow fluid.

Who is at risk?

Due to this, people younger than 40 to 50 years of age may be more susceptible to monkeypox due to the global cessation of smallpox vaccination campaigns. Severe cases have occurred more commonly among children, relating to factors such as the extent of exposure, the patient's health status and any health complications. It can also be severe in pregnant people and persons with immune suppression due to other health conditions, according to WHO.

A vaccine (MVA-BN) and the treatment Tecovirimat were approved for the treatment of monkeypox in 2019 and 2022, respectively, but they are not yet widely available.