Lake Tahoe shrouded in smoke as Caldor Fire closes in

In the midst of the growing Caldor Fire in El Dorado County, California, ash fell from the orange, smoke-filled sky on Aug. 18.

"It is hard to breathe out here," Aaron Hagar said as he recorded video of the scene around him. "It is fuunnky," he added, dragging out the first syllable for emphasis.

Hagar is one of many residents in El Dorado County, California, choking on poor air quality under a smoke-filled sky. As the Caldor Fire blazes nearby, Hagar pulled out of his camera on Aug. 18 and recorded footage of what appeared to be snow falling from the sky.

But it was certainly not any wintry precipitation.

“I mean, they’re big, right?” Hagar said as he pointed to a piece of ash on the ground. He later added, “I guess the fire is still a ways from us, but it is just blowing stuff all over us all day. Look at that, that’s all ash. Man, that’s scary.” 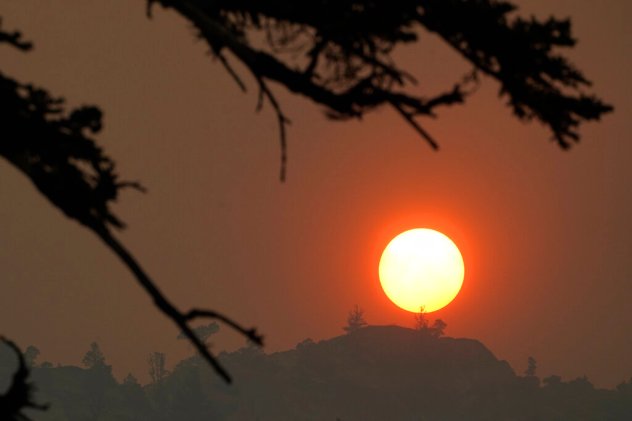 Smoke from the Caldor Fire obscures the sun as it sets over the mountains near South Lake Tahoe, Calif., Tuesday, Aug. 24, 2021. The massive wildfire, that is over a week old, has scorched more than 190 square miles, (492 square kilometers) and destroyed hundreds of homes since Aug. 14. It is now less than 20 miles from Lake Tahoe. (AP Photo/Rich Pedroncelli)

The Stage 3 level was reached when the Air Quality Index (AQI) topped 200 for a 24-hour period. That threshold, which had never been reached before, was met on Sunday, Monday and Tuesday of this week.

AQI is a helpful metric to be viewed as a yardstick that runs from 0 to 500, AirNow.gov says. It is an index used by officials to communicate how concentrated and enduring the pollutants in the air are.

Before the Caldor Fire, health officials in the Lake Tahoe area had never seen the AQI top 200. On Monday, it nearly reached 300.

Essentially, it's fair to say this is the worst air quality the region has ever seen.

The Caldor Fire has grown to more than 120,000 acres, destroying over 600 structures, forcing evacuations in two counties, and leading to record-breaking smoke across state lines in Nevada.

Those same winds that fueled the fire's spread have also been responsible for the suffocating smoke and hazardous air quality warnings.

At Lake Tahoe, a state park beloved for its picturesque mountain views and beautiful trails, officials from Nevada State Parks closed access to the lands until Friday, The Associated Press reported, including the popular beach at Sand Harbor.

In the surrounding area, the Washoe County School District canceled classes on Monday for its public schools that serve over 67,000 students.

At one point on Tuesday evening, Tahoe Vista, a scenic destination spot on the north shore of Lake Tahoe, recorded an AQI score of 415, CBS News reported. The Caldor Fire is burning less than 20 miles west of the state park, and evacuation orders could be necessary if the current warnings are upgraded.

"If it goes into an evacuation order, there will be a warning for some portion the South Lake Tahoe basin," Sgt. Eric Palmberg of the El Dorado County Sheriff’s Office said on Tuesday night, according to SFGate.com. "I don't have the information on where exactly where that will be, but ultimately that will be the trigger."

Underneath the dangerously orange-painted skies, Petersen said residents need to do all they can to avoid being out in the conditions. 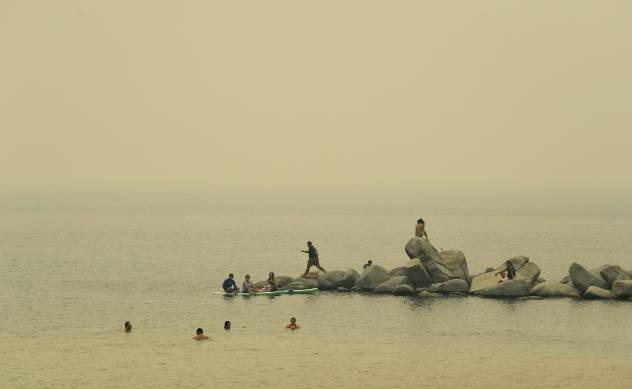 Smoke did not stop some people from visiting Lake Tahoe at Sand Harbor Beach in Washoe County, Nev., on Aug. 24, 2021. Smoke from the Dixie and Caldor fires in California covered Lake Tahoe.

Petersen said it is difficult to give a specific amount of time spent outside amid the dangerous conditions that would endanger someone, but advised that residents in the area should do their best to remain indoors.

"More sensitive groups, they might be outside for five minutes and start experiencing symptoms," he said. "People that already have existing heart or lung ailments, such as asthma and heart disease" might feel the effects from the smoke earlier than someone without one of those conditions. "Everybody should try to avoid the risk as much as possible just by not going outside," he added.

Interestingly, experts from the University of California, Davis added that those health dangers can closely mirror symptoms of COVID-19.

According to a news release from the university, smoky air can irritate a person's eyes, nose and throat, Nicholas Kenyon of UC Davis Health said. It also can increase shortness of breath, especially in those with chronic lung diseases like asthma and COPD.

Over the long term, Petersen said, the effects of smoke inhalation can lead to enduring conditions such as asthma, chronic bronchitis or even cardiovascular disease. The PM2.5 particles, the fine particles from the fire that are creating the hazardous conditions, can be inhaled deep into the lungs and be passed from your respiratory system over to your cardiovascular system, Petersen warned.

Petersen said the range of time it takes for someone to be affected by the smoke depends on a number of factors, such as age and health risks, but he urged all residents to alter their regular routines to ensure safety. 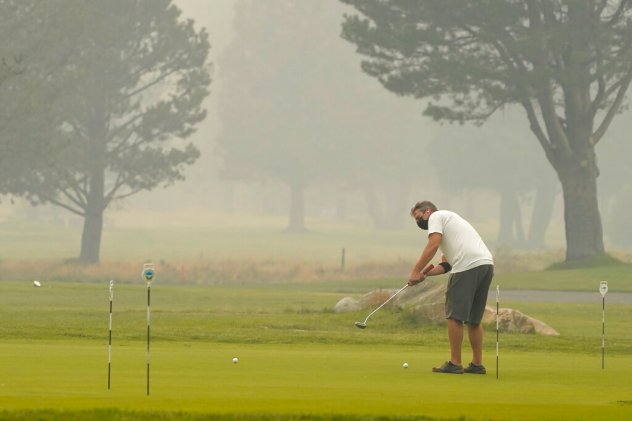 A golfer wears a face mask as he practices his putting at the smoke-shrouded Lake Tahoe Golf Course in South Lake Tahoe, Calif., Tuesday, Aug. 24, 2021. The massive Caldor Fire, that is over a week old, has scorched more than 190 square miles, (492 square kilometers) and destroyed hundreds of homes since Aug. 14. It is now less than 20 miles from Lake Tahoe. (AP Photo/Rich Pedroncelli)

"If you absolutely have to be outside, certainly you want to kind of reduce your activity level. You want to keep your heart rate down, breathe as little smoke as possible," Petersen said. "Certainly don't go on your daily jog. I'd wait to mow the lawn, things like that. The best way to avoid [the air quality dangers] is just to reduce your exposure to it."

If a house has a whole-home air conditioner, he urged residents to make sure it is installed with a high-efficiency filter, which will help filter some of the air particles out.

But if you have a window-style air conditioner, Petersen said it is recommended to avoid using those "because you're just going to be pulling more smoke from the outside into your house."

One safety tip that Petersen and other officials have also encouraged is the creation of a 'clean room.' Petersen recommended choosing a room like a bedroom that doesn't have doors leading to the outside and minimal windows. For that room, Petersen urged residents to buy a commercially available air purifier with HEPA filtrations built into them, which will clean the air in single rooms.

But in the pandemic age, Petersen said many residents may already own one key safety precaution: a quality face mask.

"You can get N-95 masks and as long as those are properly fit-tested, the N-95 masks can filter out some of the PM2.5 particles, so if you have to be outside, those masks certainly can help," Petersen said. "The masks that we're wearing to mitigate the pandemic and spread of COVID, just a regular cloth-type mask, that's not really going to help you as far as the PM2.5 particles are concerned." Crisp weather and apples on the first day of fall