'Historically' low flu activity reported throughout the US this year

Flu activity ‘historically low’ in the US

As COVID-19 dominates headlines, influenza has all but disappeared.

While the flu season is far from over and flu cases have been reported year-round in the United States in the past, during a typical year, influenza cases would likely ramp up during the fall and winter, peaking in February. Not this year.

"We haven’t picked up any outbreaks of influenza or anything really, it’s just historically low,” Lynette Brammer, who leads the domestic influenza team for the Centers for Disease Control and Prevention (CDC), told AccuWeather. Brammer's team tracks flu cases each year in its weekly report, Flu View.

In the below graphic, the CDC compares flu cases over the past several years, and influenza in the 2020-21 season, represented on the red line with black triangles, is almost non-existent. 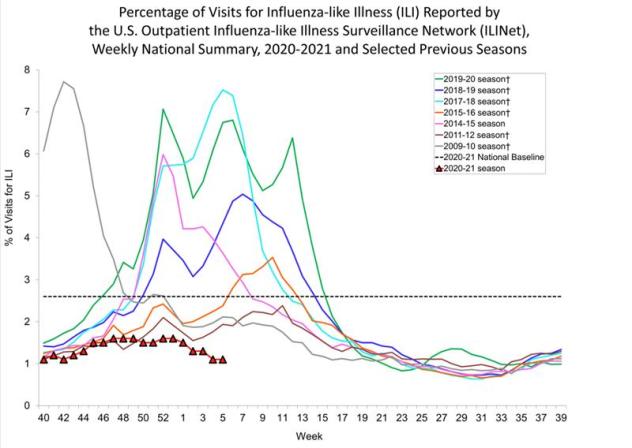 (Centers for Disease Control and Prevention)

In fact, many people have reported not feeling any flu or cold symptoms.

Brammer said the lack of flu is not only good news for individual health, but considering the number of people hospitalized for influenza each year, it's a huge break for hospitals inundated with COVID-19 patients.

Same. And my son hasn't gotten the typical winter colds he usually does at this rate. Knock on wood, anyway. But it seems like day care as whole is more healthy.

"Given the current situation, that’s a very good thing. You know the hospitals have been overwhelmed in a lot of cases, and you really don’t want to add flu on top of that,” Brammer said.

According to the CDC, some 173 people were hospitalized for the flu between Oct. 1 and Feb. 13. That's lower than rates for any season since routine data collection began in the 1990s.

In comparison, 400,000 people were hospitalized for the flu and 22,000 died, including 434 children, during the entire 2019-20 season. There has only been one pediatric flu death reported this season. 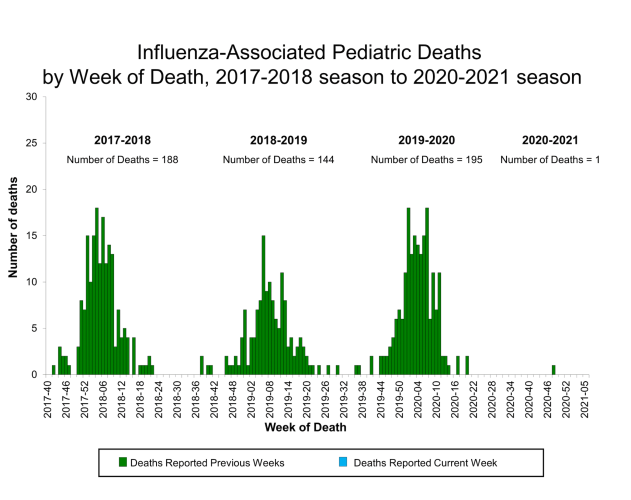 (Centers for Disease Control and Prevention)

The Flu View activity maps look very different for the week ending Feb. 13, 2020, compared to the same period in 2021. All states are reporting minimal activity this year.

Last year at this time, most states were reporting high to very high activity. 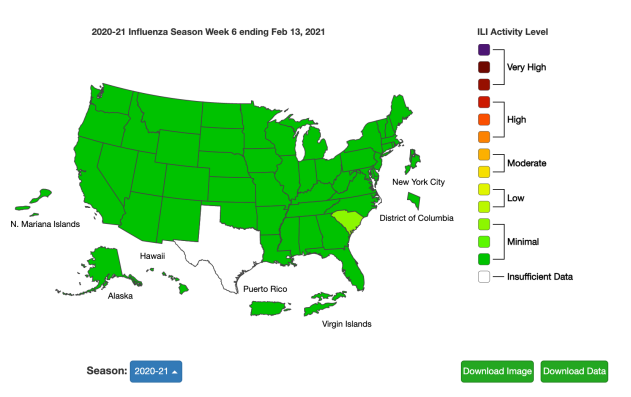 The change doesn't surprise Dr. Bryan Lewis, an epidemiologist with the Biocomplexity Institute at the University of Virginia.

"The flu has just been fully interrupted by people wearing masks, staying home, by the reduced number of children in schools, etc., and I think a lot of people also got the flu vaccine as well," Lewis said. "And so all of those forces combined have really stopped the flu in its tracks.” 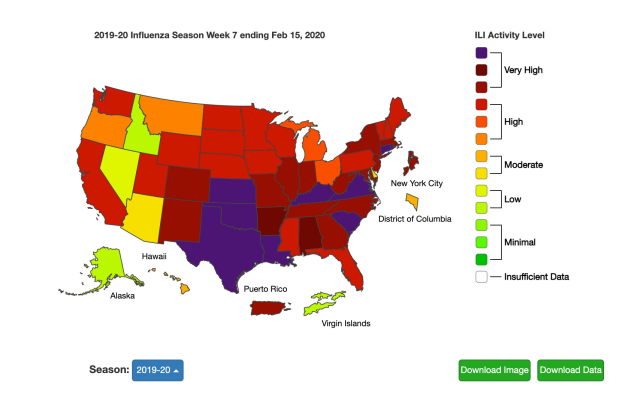 Does the low number of flu cases this season mean next season could be more complicated? Brammer says it will be interesting to see what happens.

“By the time you're about 5, most people have seen flu before. Everybody has flu antibodies, and so I don’t think having, basically, a year with very little flu circulation would have a huge impact on the population," she said. "But I think seeing how flu is going to come back is going to be really interesting.”

Flu season typically begins in October and lasts well into March although activity can last as late as May. Flu viruses are more stable in cold air, and the low humidity allows the virus particles to remain in the air, according to Peter Palese, who was the lead author on a key flu study in 2007.

While the flu has seemingly been defeated this year, Lewis warns that doesn't mean people should stop being extremely vigilant, and he urges everyone to get a flu shot, continue to wash their hands, social distance and wear a mask.

“The grounds are ripe for transmission, so everything we can do to keep both flu and COVID at bay is going to benefit everyone’s health," Lewis, said.

‘Lies my mother told me:’ Debunking cold-weather myths
The hidden dangers of drinking hot beverages
How to stop glasses from fogging up while wearing a mask in winter