Could the new coronavirus lead to a prolonged flu season? 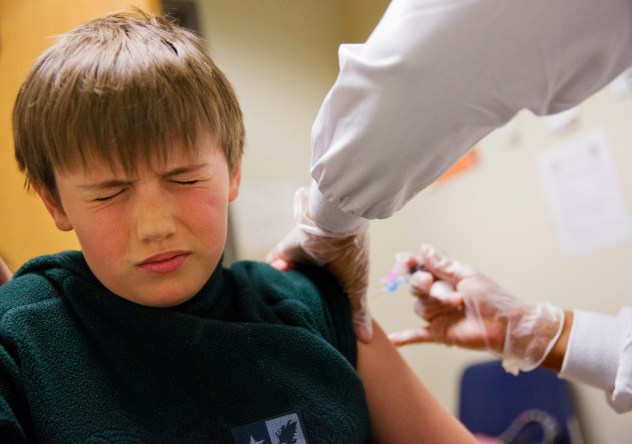 Reed Olson, 8, gets a flu shot at a Dekalb County health center in Decatur, Ga., in this file photo. Flu vaccines are reducing doctor's visits for flu illness by 45 percent overall, according to a CDC study. (AP Photo/David Goldman)

Two peaks of increased flu activity have already occurred in the 2019-20 flu season and now it’s possible a third spike could take place.

The flu season actually captures a variety of influenza-like illnesses (ILI), which often include lesser human coronaviruses as well as influenza, which is the main contributor to the season. COVID-19, the coronavirus that has now spread to more than 100 countries, is not influenza, but it could contribute to more ILI activity.

“With the COVID-19 virus circulating and the potential to cause a significant number of infections, we may see a third peak in the influenza-like activity surveillance used to monitor the flu season,” Dr. Bryan Lewis, a professor at the Biocomplexity Institute, told AccuWeather.

As coronavirus cases in the United States increase, schools and universities are forced to make difficult decisions.

The flu season has continued its expected decline but less so than in the previous several weeks, according to researchers at the Biocomplexity Institute at the University of Virginia who work in a research partnership with AccuWeather.

While 34 U.S. states report declining ILI, nearly half of the states (24) are still at higher levels than ever for this time of year. “The season remains extremely active and should continue to be so for a couple more weeks,” Dr. Lewis told AccuWeather.

Visits to healthcare providers for ILI decreased for the third straight week to 5.3 percent compared to 5.5 percent the previous week, according to the Centers for Disease Control and Prevention (CDC). However, the highest peak during all of last year’s difficult flu season was 5.1 percent.

A total of 40 states are at high ILI activity levels and just three are considered to have low or minimal levels of the flu (Idaho, Arizona and Florida), according to the CDC.

Flu activity is expected to maintain high levels in the North, stretching from the Pacific Northwest across to New England and dipping into the central Plains, according to the researchers at the Biocomplexity Institute. Flu activity in the South and mid-Atlantic should continue to decline and return to pre-season levels in the coming weeks.

An estimated 34 million people have experienced flu illnesses in the U.S. this season, with 350,000 hospitalizations and 20,000 deaths from the flu, according to the CDC.

Flu vaccines are reducing doctor's visits for flu illness by 45 percent overall, according to a study released last week by the CDC. The CDC notes this is consistent with estimates of flu vaccine effectiveness from previous flu seasons that ranged from 40 percent to 60 percent when flu vaccine viruses were similar to circulating flu viruses.

Flu season typically begins in October, peaks between December and February and lasts well into March, although activity can last as late as May. Flu viruses are more stable in cold air and the low humidity allows the virus particles to remain in the air, according to Peter Palese, who was the lead author on a key flu study in 2007.