Lawmakers spent over 15 hours debating the bill before the key vote. The $740 billion package is expected to reduce planet-heating emissions by 2030, while also addressing taxes and health care. 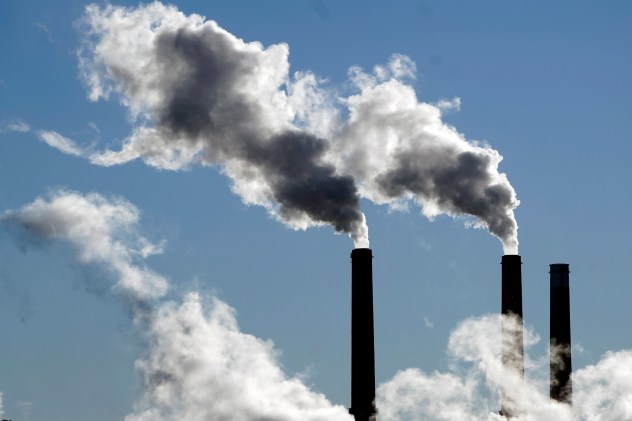 Steam is emitted from smoke stacks at a coal-fired power plant in Craig, Colorado, in this Nov. 17, 2021, file photo. (AP Photo/Rick Bowmer)

Aug. 7 (UPI) -- The U.S. Senate on Sunday afternoon passed a bill that tackles health care and taxes, and provides the largest-ever investments into green energy in American history after a lengthy "vote-a-rama."

The Inflation Reduction Act will head to a vote in the Democratic-controlled House where it is expected to pass as early as Friday before it will be sent to President Joe Biden's desk to be signed into law.

"The Inflation Reduction Act that this Senate Democratic Majority has passed will endure as one of the defining legislative feats of the 21st century," Senate Democratic leader Chuck Schumer said in a statement.

"It reduces inflation, lowers costs, creates millions of good-paying jobs, and is the boldest climate package in U.S. history."

Experts have estimated the climate provisions of the bill will reduce America’s planet-heating emissions by about 40% by 2030, compared with 2005 levels.

Sen. Mitch McConnell, the Senate Republican leader, said in a statement after the vote that Democrats chose to "double down on their economic disaster" by passing the bill.

"The last time Senate Democrats tried to remake the economy on party lines, they shoved American families into the worst inflation in 40 years," McConnell said.

"Democrats got all-you-can-eat liberal spending and working families got stuck with the bill."

McConnell said that the bill will lead to "job-killing tax hikes" and a doubling of the Internal Revenue Service.

"Their response to runaway inflation they've created is a bill that experts say will not meaningfully cut inflation at all," McConnell said.

The $740 billion bill includes $433 billion in new spending on investments into green energy and the reduction of greenhouse gases, and would give Medicare the ability to negotiate the prices for prescription drugs.

Schumer had led the party to deals earning their cooperation while removing a provision that targeted closing a tax loophole for hedge fund managers.

Democrats passed the package through the Senate on Sunday with a simple majority in a budget process known as reconciliation that allows them to avoid a Republican filibuster.

However, Republicans with a vote of 57-43 successfully removed a provision capping the cost of insulin for many patients at $35 but left intact a portion of the provision that applies to Medicare patients.

In the reconciliation process, Senate parliamentarian Elizabeth MacDonough was tasked with deciding whether the bill's provisions meet strict budget rules.

MacDonough on Saturday gave approval of the bill's climate provisions and most of its plans targeting drug prices but said part of the cap did not adhere to rules that allowed Democrats to advance the bill, including the insulin provision.

"Republicans have just gone on the record in favor of expensive insulin," said Sen. Ron Wyden, D-Ore., according to the Washington Post.

"After years of tough talk about taking on insulin makers, Republicans have once against wilted in the face of heat from Big Pharma."