An online tool created by Climate Central lets you take a look at just how devastating climate change may be for cities across the globe if action isn't taken to stop the rise in temperature.

How will climate change alter the landscape of the Earth over the next few hundred years? New interactive tools developed by researchers at Climate Central can now paint that picture.

The tools demonstrate how much sea levels could rise if changes are or are not made in carbon pollution levels. If changes aren't made, Ben Strauss, CEO and chief scientist of Climate Central, a consortium of independent scientists and journalists based in Princeton, New Jersey, said that millions of people living along coastlines will be at-risk, and Asia will be the region of the world that will be most at-risk. Among all the nations at-risk, Vietnam has the highest risks from rising sea levels.

In the United States, South Florida, Boston, New York City and the Bay Area in California are most at risk of "a great deal of threats as well," Strauss said. 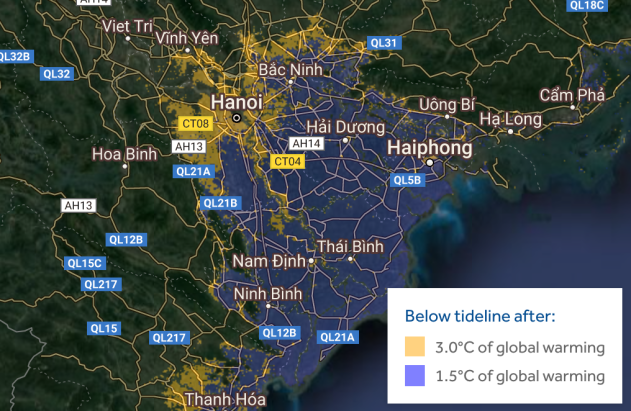 Hanoi, Vietnam, the nation's capital, could become below sea level if the current rate of warming on Earth continues. (Climate Central)

The graphics reveal what various landmarks across the world will look like in 2100 with 1.5 degrees Celsius (2.7 degrees Fahrenheit) of warming and 3 C (5.4 F) of warming. With 1.5 C of warming, research suggests that ocean levels will rise 1.5 feet by the year 2100, compared to if the Earth warms 3 C, which would result in sea levels rising 21 feet by 2100.

"This study really looks at long-term sea levels where the threat would be permanent and complete inundation," Strauss said. "There a possibility to build defenses for sure, but we have to ask how deep a bowl they want to live in the bottom of." 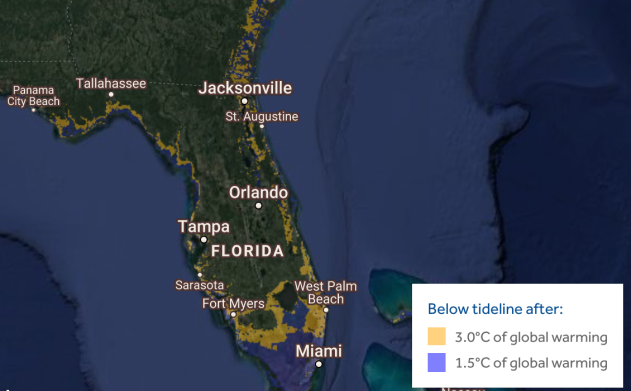 Some 50 cities across the globe are at risk of losing their most-developed areas to rising sea levels.

"Even the low end is serious, but we'll have some time to deal with it," he said.

Under the "best-case scenario," Strauss said, sea levels could rise from 5-10 feet in the next few centuries, with 30 feet or more being the worst-case scenario.

"The whole point of our research was to show how large a choice we have," Strauss said. "It's really a choice between a manageable future and one where there would be so much sea-level rise that many of our great coastal cities are likely to be lost."

According to Climate Central, some of the "most ambitious" goals from the Paris Climate Agreement would cut exposure by around 50%.

Strauss said that while the rise will occur over multiple centuries, the study mainly focused on how much sea levels will rise -- not how quickly -- as the speed of the rise can be very difficult to predict.

"Think about your freezer. If you unplug your freezer, you know it's going to thaw but you don't know hour by hour how many things will melt or when it will all finish melting," Strauss said. "The same thing is true when you do scientific projections of sea-level rise."

The rise may not reach its full effects for a few centuries, but what is done now to mitigate it is important. Strauss said the actions that are taken in the next few decades will "lock-in" the future for many of these historic locations that once seemed destined to last the test of time.

In many cities, the mitigation efforts may be too expensive or sea levels could be too high to fight back against, so saving them could be unrealistic at that point in time. Once the carbon is in the air, Strauss said it will continue to warm the planet for centuries to come.

"We would see relocation and loss of the great heritage we have and all of those coastal places," Strauss said. "It's up to us to prevent that."