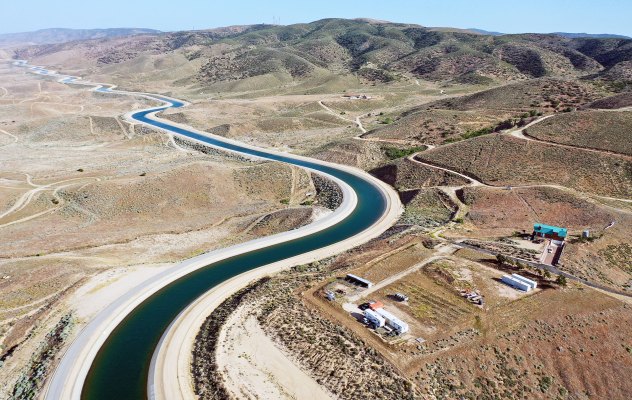 The California Aqueduct moves water from northern California to the state's drier south, where water restrictions have been declared for 6 million residents amid drought conditions. More than 70 water agencies in California could face water shortages in the coming months. (Mario Tama/Getty Images)

(CNN) -- Nearly 20% of California's urban water agencies reported they could see significant water shortages in the coming months as the state braces for a potential fourth consecutive year of drought.

After surveying urban water agencies representing roughly 90% of the state's population, the California Department of Water Resources early this week released its first annual water supply and demand report that assesses how the state is faring with water supply amid unrelenting drought conditions.

The assessment, which includes annual data through July 1, found that while a vast majority -- 82% -- of urban water suppliers who submitted reports say they have enough water to meet projected demand in the coming year, around 18% -- 73 out of the 414 water suppliers -- reported they will soon face potential shortages.

This is the first year that California water suppliers are required to submit water shortage reports as climate change strains supply across the state. Water resources officials say that this initial assessment will "serve as a baseline to evaluate if urban water suppliers are accurately assessing their annual water supply and demand."

As the critical winter months near, more than 99% of California remains in a drought, according to the US Drought Monitor. Warmer-than-usual temperatures, lack of storms and low snowpack have spurred the region's historic drought, with the past three years being the driest such period on record for California.

And with limited signs of relief in drought conditions, these reported potential water shortages from agencies may only worsen in the coming months. Experts have said that the state needs a well-above-average water year or several wet years in a row to quench the relentless drought and ultimately replenish reservoirs.

"These annual assessments submitted by local agencies are intended to help state and local water suppliers better prepare for current and future droughts," the water resources department said in a statement.

Most of the agencies that reported potential water shortages are in California's most populated hydrologic areas, such as Los Angeles, Orange County, San Diego and the San Francisco Bay Area. The Metropolitan Water District of Southern California in particular reported a potential shortage of 43%, but does not take into account the emergency conservation orders in place, like banning outdoor watering, and water that was in storage.

Rebecca Kimitch, a spokesperson for the Metropolitan Water District of Southern California, told CNN the agency anticipates the acute water shortage to continue into the first part of 2023 and "possibly beyond," adding that water restrictions will not likely be lifted until California receives much-needed precipitation and more allocations from the state water project.

In the same region, Las Virgenes Municipal Water District -- which serves the affluent haven of Calabasas, home to many A-listers like Kevin Hart and Kim and Kourtney Kardashian -- reported potentially facing a 63% water shortage. The agency recently doubled down on water restriction violations for customers by adding water restrictors to the pipes for repeat offenders to sharply reduce a home's water supply.

Three agencies -- Ventura County Waterworks in the Simi Valley and Moorpark Districts and the City of Menlo Park -- reported that even after they implement all water conservation efforts or increase supplies that are laid out in their current plans, they still expect to see shortages in the new year.

Meanwhile, 21 urban water suppliers, including the Modesto Irrigation District and the City of Compton Water Department, failed to submit their assessment reports. In a statement, Department of Water Resources officials called the agencies "delinquent suppliers," reminding them of the importance to "proactively assess supplies and demands in order to be prepared in case of future shortage events."

Only water agencies that serve more than 3,000 connections or supply over 3,000 acre-feet of municipal drinking water each year are required to submit assessments. The final report, which the water resources department submitted to the State Water Resources Control Board on Monday, includes assessments conducted by 414 of the 435 local urban water suppliers required to submit. It doesn't include small water suppliers that have historically faced more water challenges during a drought.

The department's report comes about three months after the federal government announced that the drying Colorado River, a key water source for many in the Western states including California, will operate in a Tier 2 shortage condition for the first time starting January 2023. California will not yet have cuts made to the water they receive from the Colorado River, but Kimitch said the dire situation on the river basin might increase the need for more conservation.

"The rest of Southern California will also likely see calls for increased conservation in the coming months, as the region's other source of imported water, the Colorado River, faces growing constraints," she said.

Kimitch also said the initial call for conservation will likely be voluntary, but unless water supply outlook does not improve, the Metropolitan Water District of Southern California may need to implement mandatory water cuts for its entire service area.

"Given the worsening conditions on the river, [the district] does not anticipate having a full Colorado River aqueduct in 2023 or beyond," Kimitch added. "So our entire service area must take measures to protect our limited Colorado River supplies."

The report covers annual data through July 1 and then projects water availability through June 30, 2023. The Department of Water Resources suggested in a guidance document published in April that agencies base their assessments on the current year's drought conditions and best available drought outlook the following year.