Some see dead space on the side of the road. These groups see a potential haven for wildlife.

Reinvigorating those grassy edges of streets and highways, called road verges or medians, is the bread and butter of one local conservation group that's working to "re-wild" traffic areas for a biodiversity boost. 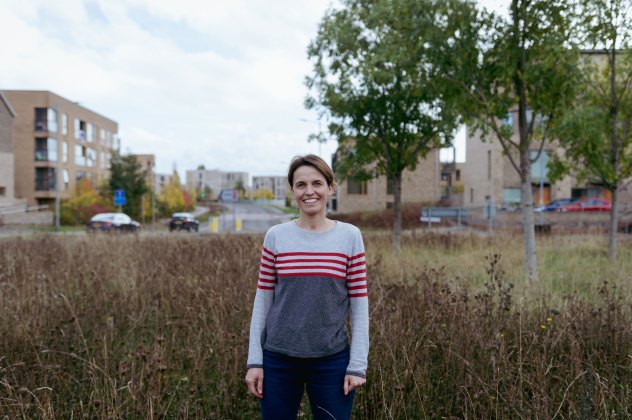 On The Verge Cambridge volunteer Jo Scrivens says it's satisfying and even astonishing to see the wildflowers bloom on road verges and meadows the group has planted. (Toby Hancock/CNN)

(CNN) -- This roundabout would have been easily overlooked just a few months ago -- wedged between busy traffic lanes, there wasn't much growing apart from bog-standard grass. But local residents who drove past every day thought it had potential.

Now, it's been transformed into a wildflower meadow, buzzing with insect life and blooming with color.

Reinvigorating those grassy edges of streets and highways -- often called road verges or medians -- is the bread and butter of local conservation group On The Verge Cambridge, which stepped in to help re-wild the traffic circle as they work toward boosting biodiversity in the local area through planting.

It's been fulfilling and even astonishing to see nature work its magic, says volunteer Jo Scrivens as she thinks back to some of the first meadows the group planted in 2019.

"It was raining and it was windy, and we're just chucking this wildflower seed. And I said, 'Oh my goodness, is this a complete and utter waste of time?'" Scrivens recalls. "Six months later, we cycled around on a spring day, and we were just utterly blown away by these areas that were full of wildflowers. It's so satisfying."

They might look like small patches of land, but as world leaders gather in Egypt at the UN's COP27 climate summit, conservationists say road verges could be a key solution to both the climate and biodiversity crisis.

"Just a tiny corner, just a small area, can create a wildflower meadow," says Ben Greig, founder of On The Verge Cambridge, whose volunteers help identify and manage natural urban areas that could be planted better for pollinators, like bees, butterflies and beetles. The group hopes to connect enough wild areas to form an "insect corridor" that can assist pollinators as they move around the English city. 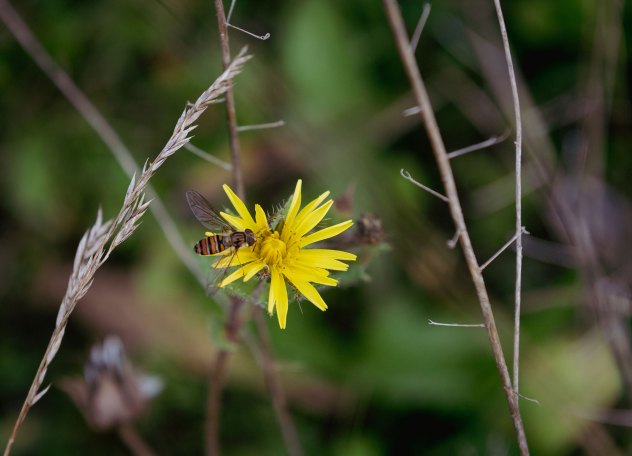 A Marmalade Hoverfly stops at a wildflower on the roundabout that volunteers from On The Verge Cambridge helped transform into a meadow. (Toby Hancock/CNN)

But these roadside areas also have potential as a climate change solution -- when planted correctly, they can absorb and hold significant stocks of carbon-dioxide. Studies show that roadside strips are similar to grasslands in their carbon storage potential, with urban road verges holding even more carbon stocks in their soil than natural soils.

Havens for bees and butterflies

About 75% of the different crops grown worldwide rely on pollination, but in just a few decades, wild pollinator species have declined by a third, according to the World Wide Fund for Nature. Half of Britain's butterfly species are facing the threat of extinction, according to the charity Butterfly Conservation.

It's a dire situation that's getting worse amid the climate crisis.

"In a lot of countries -- and lots of parts of the US, and in the UK -- we don't really have a lot of space for nature. Essentially, most of our land is taken up by farmland, which is not very good for wildlife, not very good for pollinators," said Benjamin Phillips, a conservation scientist at the University of Exeter.

Phillips noted that despite the habitat degradation from air pollution, car exhaust and litter, roadsides still provide valuable habitats for these insects.

Standing in a patch of tall grass that volunteers have worked to re-wild in between two lanes of a highway, Greig points out dozens of plant species that are blooming even as the autumn weather rolls in. Bees circle the blossoms of purple greater knapweed and the flowers of yellow hawkweed -- some of the more than 70 species found in this patch alone.

"It's a huge area that can act as a sanctuary for wildlife, and it can be part of nature's recovery," said Mark Schofield, a road verges advisor for British conservation organization Plantlife.

If roadside areas are managed well, they can also save local governments time and money. 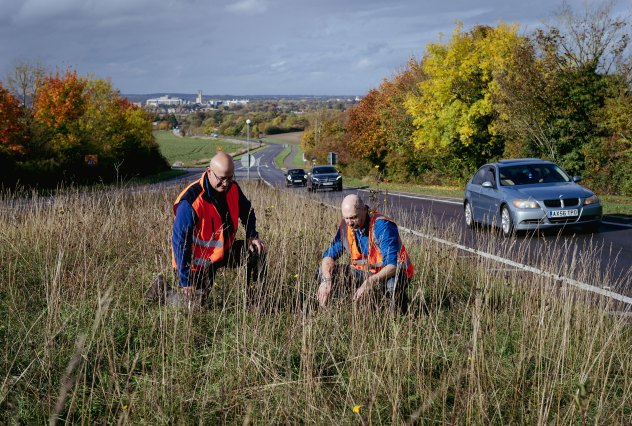 On The Verge Cambridge volunteers Ray Hackett and Ben Greig point out some of the 70 species found in this biodiverse roadside area. (Toby Hancock/CNN)

For years, Schofield says, the status quo of roadside management has not only been more costly than it needs to be, but also worse for nature.

"It's no understatement to say that we could set about a revolution in managing vegetation on the public estate, across our green infrastructure," he said.

Plantlife has been urging local governments and highway managers around the United Kingdom to cut roadside grass less often and to collect the cuttings. If grass cuttings are left to rot on the side of the road, it increases the fertility of the soil to the point where only the strongest plants -- like stinging nettles, brambles, and other weeds -- can survive. But simple changes like cutting less often, mowing later in the year, and collecting the grass can ensure that more delicate wildflowers and native species aren't crowded out.

And those spaces for local plants can add up; Plantlife estimates that roadside areas account for 1.2% of Great Britain's total land area. That's more than 1,000 square miles of land that pollinators could benefit from.

"It's arguably a whole county of land hidden in plain sight," Schofield said.

More than 700 different types of wildflowers can be found on roadsides across the UK, including 29 species of rare wild orchids, according to Plantlife.

What's more, there are now some plants that can only be found on road verges, such as the fen ragwort, which has disappeared from the wild, apart from one ditch in Cambridgeshire. The rare plant was once more widespread and was believed to have become extinct during the Victoria era, until it was rediscovered in 1972 in the refuge of a roadside habitat.

Many road verges have been left largely untouched -- serving as remnants of "lost" habitats -- as surrounding areas have had native species and soil removed to make way for agriculture, housing or other human development.

Across the UK, 58% of all species are in decline and about 15% are threatened with extinction, according to the 2019 UK State of Nature report, making these pockets of wildlife all the more crucial.

Grass clippings and the green economy

Collecting grass clippings helps promote the growth of wildflowers, but some parts of the country are also seeing an opportunity in the waste. Instead of burning the green waste or taking it to a landfill, it's possible to turn grass clippings into a range of other profitable materials, including biogas, organic fertilizers, clean water and even a component of asphalt. 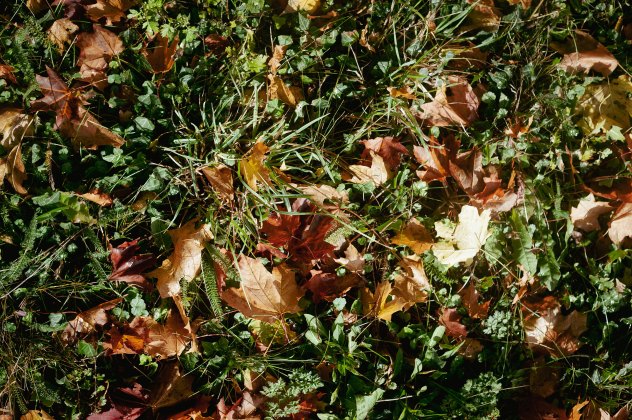 Instead of burning green waste from road verges or taking it to a landfill, it's possible to turn grass clippings into a range of other profitable materials, including biogas, organic fertilizers, and even a component of asphalt. (Toby Hancock/CNN)

In the English county of Lincolnshire, authorities have trialed new grass-harvesting machines, and offset the operating costs by taking the grass clippings to a nearby plant that converts the grass into other materials through a process called anaerobic digestion.

"What we're trying to help local authorities see is that their green infrastructure is an asset to them," Plantlife's Mark Schofield said. "It can even pay for its own management -- and that can extend from road verges to public parks and gardens."

Finding more sustainable ways to produce products like asphalt, which is a large source of air pollution emissions, could also help reduce the overall carbon footprint of pavement production.

Meanwhile, redirecting green waste into new products and away from landfills reduces methane emissions. Methane is a potent greenhouse gas, with a much higher planet-warming power than carbon dioxide, and scientists say slashing methane emissions is one of the most effective ways to quickly limit global warming.

Experts say reducing grass waste can help take a bite out of the climate crisis, which is already wreaking havoc in the form of more intense heat waves, deadly storms and unprecedented flooding.

The team at Grassification has already worked with one company that makes green insulation out of grass fibers and another venture that has created prototypes of plastic-like furniture made from grass waste.

Meers told CNN some of these solutions could be implemented more widely in Europe and beyond in just a few years. "But you need this kind of joint action between public bodies, research centers and companies to pick this up."

Despite growing awareness from local authorities that these roadside habitats are valuable -- and potentially even lucrative -- climate campaigners and academics alike say it's hard to shift road verge management away from "business as usual."

"When you look on the ground, the shift has been quite slow, even though it does seem like such an obvious win-win," said Phillips, noting that public perception is a huge hurdle. "People have expectations around how these areas should be managed, and expect them to look neat and tidy and associate longer grass with neglect."

Urban areas in particular often intensively manage roadsides with frequent grass cuttings, which can be both expensive and harmful for nature. Sometimes all it takes is a few complaints to the local government about tall or messy looking grass for a wildflower meadow to be mowed over.

One local council in the southern English county of Dorset has been a pioneer in getting the public on board for more wild, less manicured roadsides. As part of a campaign called "Love Your Verge," local authorities put up signs in unmowed areas to explain how the wildflowers and diverse array of plant species can be beneficial for bees and hedgehogs.

The signs also aim to encourage drivers not to litter on roadsides.

By moving to a "cut and collect" approach and mowing once a year instead of seven times, Dorset has reduced its annual budget for highway verge management and redirected that money to other climate change projects and public services.

"It's not just saving staff time -- it's the actual machinery that's required, it's the cost of getting that machinery to that place and returning it again, and the diesel required to drive there," said Emma Teasdale, who works for the local government-backed campaign Litter Free Dorset.

If those good practices were adopted by more local authorities and highway managers, they could help the UK make significant progress toward achieving government targets on biodiversity, nature, and climate, according to Plantlife.

Ahead of COP27, climate and environment organizations warned that the Paris Agreement goals -- which were adopted by nearly 200 nations in 2015 to combat climate change -- cannot be achieved without the restoration of natural ecosystems, according to the Nature4Climate alliance, and yet "nature is being destroyed faster than it can regenerate."

With more than 22 million miles of road estimated worldwide, campaigners say road verge ecosystems -- and the green economy opportunities they present -- must be part of that restoration.