As coral reefs face threats from human activity, researchers work to save the organisms as well as the islands' natural defense against storms.

The team is taking fragments of healthy parent coral colonies and planting them onto manmade coral trees to support new growth.

Biologists working in and around the Mariana Islands are tending to a coral nursery in the hopes of revitalizing the reefs around the islands.

The southern islands of the Commonwealth of the Northern Mariana Islands are home to some of the oldest and most developed reefs in the archipelago, and the island of Saipan has one of the most diverse types of coral reefs and associated habitats in the island chain, according to the National Oceanic and Atmospheric Administration (NOAA). The reefs protect a majority of the beaches along the western side of the island, creating a barrier that shelters a lagoon system while also absorbing energy from storm-driven waves.

However, impacts from human activity have negatively impacted the health of the reefs.

The threats range from impacts due to overfishing and anchor damage to coral bleaching events linked to increases in sea surface temperatures. In 2013, 2014 and 2017, Saipan experienced coral bleaching events that contributed to a loss of more than 60% of total coral cover across 34 shallow reef sites, according to the Saipan Coral Nursery Pilot Project. Ocean acidification, pollution and nutrient influx also factor into these events.

Coral bleaching occurs when corals become stressed due to a change in environmental conditions, such as a change in temperature or water quality, and expel the symbiotic microscopic algae that live in the coral. The coral turns white without the algae, which gives it both its vibrant colors and most of its nutrients. It is possible for coral to recover from this state, but the majority die without the algae. 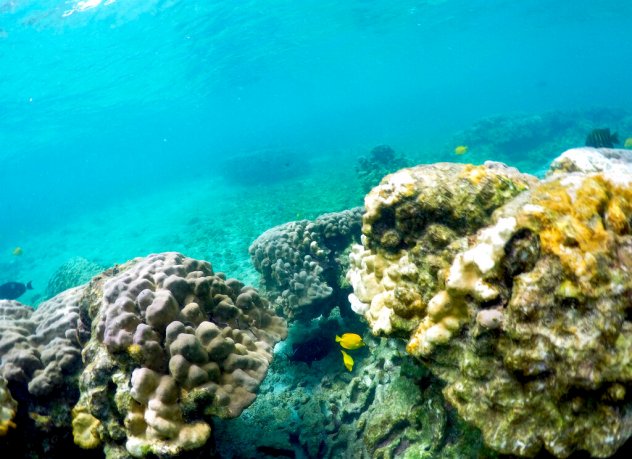 On the other hand, too much algae around can prove to be just as deadly to the organism.

Overfishing near coral reefs can remove algae-eaters, allowing the population of fleshy algae to rapidly grow. Pollution can often fuel growth, according to the National Science Foundation. Fleshy algae on reefs release nutrients that microbes feed off of, and as the levels of microbes rise, they deplete oxygen from the environment or introduce diseases.

"Right now, you can find some reefs that have good, healthy pairs of colonies, but in my opinion, they're few and far between," Coral Restoration Specialist Kylie Hasegawa told AccuWeather National Reporter Jillian Angeline. "And I always see a huge patch of algae right next to them. I mean, how long is it going to take for this algae to just take over this little coral colony here?" 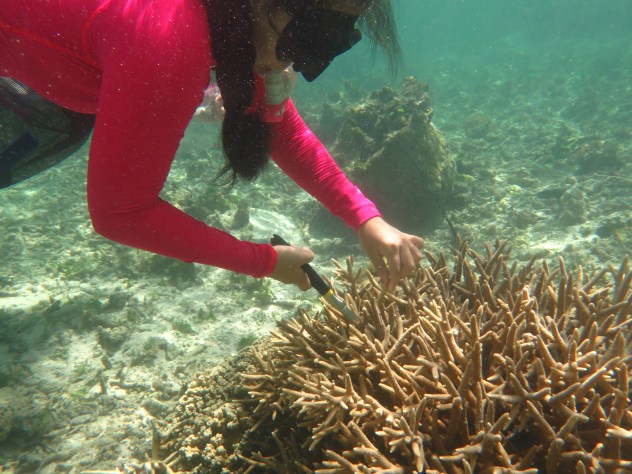 In Saipan, food fish such as parrotfish tend to eat the algae off of the coral. But when they're removed from the environment, damselfish, which are algae farmers, move in and defend the algae patches, Hasegawa said.

"It also comes with a balance of bringing back some of the organisms that were maybe there before a lot of the algae started growing," Hasegawa said.

Funded by the National Fish and Wildlife Foundation, Hasegawa and her team have been tasked with revitalizing the reefs of the Mariana Islands. To do so, they collect fragments of coral from healthy parent colonies around the island and then attach those fragments to one of the team's six coral trees where they can safely grow. 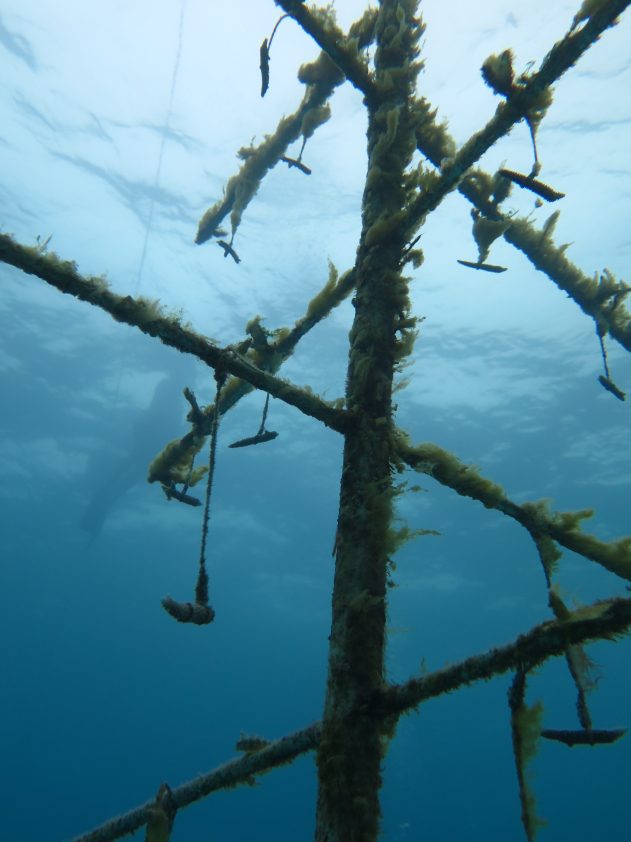 The "trees" are simple human-made structures consisting of PVC pipes with a buoy attached to one end to keep the tree upright. The other end is anchored to the bottom of the lagoon. All-in-all, they look like underwater Christmas trees with the coral attached, as Hasegawa described it. They're anchored near Mañagaha, a small islet off the west coast of Saipan within its lagoon. Here, the fragments are more or less out of harm's way.

"Generally, we look for somewhere that's more protected that isn't going to be battered by storms every time they come through," Hasegawa told Angeline. She added that they also needed to take water quality, turbidity, a measure of the water's clarity and temperature into account when choosing the location. However, finding a location where conditions are too ideal could end up stressing the coral when it's relocated and faces change.

"It's a fine line of finding somewhere that's good for them to grow, but not too easy," Hasegawa added.

It will take between nine and 12 months for the fragments to grow large enough to be out planted to the reef colonies. While progress is slow now -- the team only needs to measure the coral once every month -- the goal is to begin a cycle of taking in new fragments while outplanting the grown ones.

While Hasegawa said that they're not in a dire situation in the Mariana Islands, it could reach that point if nothing is done to take care of the coral. With no coral, it could leave the island more vulnerable to storms.

Even though the coral is underwater, the reefs provide physical protection from storms, breaking apart wave energy so that by the time the waves crash ashore, they will have lost some of their intensity and hopefully cause less damage to infrastructure and the shoreline.

For herself, the importance of taking care of the organisms lies in the morality of preserving the environment as well as the beauty they bring.

"I would want to live somewhere, and I would assume that other people would want to live somewhere, where they can enjoy the beauty of the nature around them and to try to preserve that and even take a step further where you can restore some of that," Hasegawa said. "It would just be wonderful. I would assume that people would love to live in a beautiful place like that."