COP27 summit agrees to help climate victims. But it does nothing to stop fossil fuels

Negotiators from nearly 200 countries at the COP27 UN climate summit in Egypt took the historic step of agreeing to set up a "loss and damage" fund meant to help vulnerable countries cope with climate disasters and agreed the globe needs to cut greenhouse gas emissions nearly in half by 2030.

By By Ivana Kottasová, Ella Nilsen and Rachel Ramirez, CNN, 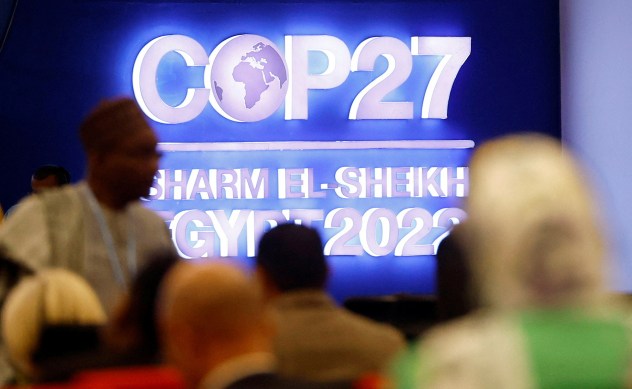 (CNN) -- The world has failed to reach an agreement to phase out fossil fuels after marathon UN climate talks were "stonewalled" by a number of oil-producing nations.

Negotiators from nearly 200 countries at the COP27 UN climate summit in Egypt took the historic step of agreeing to set up a "loss and damage" fund meant to help vulnerable countries cope with climate disasters and agreed the globe needs to cut greenhouse gas emissions nearly in half by 2030.

The agreement also reaffirmed the goal of keeping global warming to 1.5 degrees Celsius above pre-industrial levels.

However, an attempt to address the biggest source of the planet warming emissions that are causing the climate crisis ended in a fiasco after a number of nations, including China and Saudi Arabia, blocked a key proposal to phase out all fossil fuels, not just coal.

"It is more than frustrating to see overdue steps on mitigation and the phase-out of fossil energies being stonewalled by a number of large emitters and oil producers," German Foreign Minister Annalena Baerbock said in a statement.

Addressing the summit early on Sunday morning, the European Union's Climate Chief Frans Timmermans said the EU was "disappointed" with the final outcome of the summit.

"What we have in front of us is not enough of a step forward for people and planet ... we should have done much more," Timmermans said.

The agreement to help the world's most vulnerable countries deal with loss and damage represents a breakthrough, however, in what has been a contentious negotiation process.

It marks the first time countries and groups, including longtime holdouts like the United States and the EU, have agreed to establish a fund for nations vulnerable to climate disasters made worse by pollution disproportionately produced by wealthy, industrialized nations.

Negotiators and non-governmental organizations observing the talks praised the deal as a significant achievement, after developing nations and small island countries banded together to amplify pressure.

"The agreements made at COP27 are a win for our entire world," Molwyn Joseph, chair of the Alliance of Small Island States, said in a statement. "We have shown those who have felt neglected that we hear you, we see you, and we are giving you the respect and care you deserve."

The creation of the fund also became one of the key demands of activists attending the summit. Unlike in previous years, when huge protests and loud calls for action become part of the event, demonstrations were muted this year.

Protests are rare and mostly illegal in Egypt and the Egyptian government put strict limits on protesters attending the conference.

Still, the biggest protest of the summit saw hundreds of activists marching through the venue last weekend, demanding climate payments. On Friday, 10-year-old Ghanian activist Nakeeyat Dramani received a standing ovation in the plenary after calling on the delegates to "have a heart and do the math."

The fund will focus on what can be done to support loss and damage resources, but it does not include liability or compensation provisions, a senior Biden administration official told CNN.

Reaching the agreement was not easy. The summit was originally scheduled to end on Friday, but went well into overtime with negotiators still trying to hammer out the details as the conference venue was being dismantled around them.

The US and other developed nations have long sought to avoid such provisions that could open them up to legal liability and lawsuits from other countries. And in previous public remarks, US Climate Envoy John Kerry had said loss and damage was not the same thing as climate reparations.

"'Reparations' is not a word or a term that has been used in this context," Kerry said on a recent call with reporters earlier this month. He added: "We have always said that it is imperative for the developed world to help the developing world to deal with the impacts of climate."

Details on how the fund would operate remain murky. The text leaves a lot of questions on when it will be finalized and become operational, and how exactly it would be funded. The text also mentions a transitional committee that will help nail down those details, but doesn't set specific future deadlines.

And while climate experts celebrated the win, they also noted the uncertainty going forward.

An outcome on a fund came this year in large part because the G77 bloc of developing nations stayed unified, exerting increased leverage on loss and damage than in past years, climate experts said.

"They needed to be together to force the conversation we're having now," Nisha Krishnan, resilience director for World Resources Institute Africa told reporters. "The coalition has held because of this conviction that we did need to stay together to deliver this -- and to push the conversation."

For many, the fund represents a hard-fought years-long victory, pushed over the finish line by the global attention given to climate disasters such as Pakistan's devastating flooding this summer.

"It was like a big buildup," former US climate envoy Todd Stern told CNN. "This has been around for quite a while and it's getting all the more aggravating to vulnerable countries because there's still not a lot of money getting put into it. As we can see the actual disaster impacts of climate change are getting more and more intense."

Global scientists have for decades warned that warming must be limited to 1.5 degrees above pre-industrial levels -- a threshold that is fast-approaching as the planet's average temperature has already climbed to around 1.1 degrees.

But while summit delegates affirmed the goal of keeping global warming to 1.5 degrees Celsius, climate experts expressed dismay about a lack of mention of fossil fuels, or the need to phase them down to keep global temperatures from rising. As it did last year at the Glasgow summit, the text calls for a phasedown of unabated coal power, and "phase-out of inefficient fossil fuel subsidies," but does not go further to call for a phase-out of all fossil fuels, including oil and gas.

"The influence of the fossil fuel industry was found across the board," Laurence Tubiana, CEO European Climate Foundation, said in a statement. "The Egyptian Presidency has produced a text that clearly protects oil and gas petro-states and the fossil fuel industries. This trend cannot continue in the United Arab Emirates next year."

It took some dramatic action to even hold onto the 1.5-degree number struck in Glasgow last year.

On Saturday, EU officials threatened to walk out of the meeting if the final agreement failed to endorse the goal to limit warming to 1.5 degrees Celsius above pre-industrial levels. In a carefully choreographed news conference, Timmermans, flanked by a full line-up of ministers and other top officials from EU member states, said that "no deal is better than a bad deal."

"We do not want 1.5 Celsius to die here and today. That to us is completely unacceptable," he said.

The talks were further complicated by the fact that Kerry, who was leading the US delegation, tested positive for the coronavirus on Friday. He continued to communicate with his team and his foreign counterparts by phone, but his physical absence was noticeable during the crunch time at the summit.

The US and China resume climate talks

Aside from the final agreement, the summit brought several other significant developments including the resumption of formal climate talks between the US and China -- the world's two largest greenhouse gas emitters.

After China froze climate negotiations between the two countries this summer, US President Joe Biden and China President Xi Jinping agreed to reestablish US-China communications when they met last week at the G20 summit in Bali, paving the way for Kerry and his Chinese counterpart Xie Zhenhua to meet again formally.

The two sides met throughout the second week of COP, trying to pick up where they left off before China suspended the talks, according to a source familiar with the discussions. They were focused on specific action points, such as enhancing China's plan to reduce emissions of methane -- a powerful greenhouse gas -- and their overall emissions target, the source said.

Unlike last year, there was no big, joint climate announcement from the two countries. But the resumption of formal communication was seen as an encouraging sign.

"The challenge is they should do more than talk, [and] also need to lead," Shuo said, adding the restarted formal dialogue "helps to prevent the worst outcome."

Some see dead space on road side. Others see a haven for wildlife.