A major snowstorm forced school and transportation closures across Toronto, Ontario, on Jan. 17.

The same winter storm that caused travel nightmares and thousands of power outages in the United States blanketed parts of southern Ontario with more than a foot of snow this week, causing major travel disruptions and closing highways for hours on end. Residents could be seen shoveling out vehicles buried in snow and snowblowing sidewalks after snow fell across the city in a rare winter storm.

Just after 7:45 a.m. local time Monday, Environment Canada put the City of Toronto and Hamilton under a blizzard warning, according to a report from Global News. This was the first blizzard warning to be issued for Toronto since 1978, Toronto City News reported.

"[While] the amount of snow that accumulated is not that unusual for Toronto area," AccuWeather Senior Meteorologist Brian Wimer said, "the snowfall rates were more unusual, and that is probably a big part of the travel issues. When it snows at the rate of 2-3 inches per hour (5-8 cm per hour) highway crews just can’t keep up."

A blizzard warning means the agency expects at least four hours with winds of at least 25 miles per hour (40 km/h) and less than 437.45 yards (400 meters) of visibility.

Environment Canada reported peak snowfall rates of 3.14 to 3.94 inches (8 to 10 cm) per hour in Toronto, which made it near impossible for not only cars to drive in the snow but also plows. 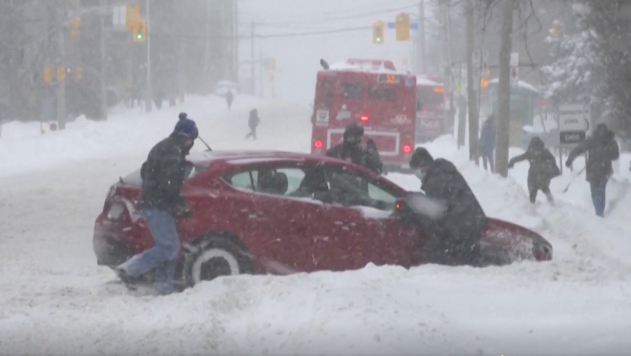 Motorists attempt to shovel a vehicle out of heavy snow that fell across Toronto and southern Ontario on Monday, Jan. 17, 2022.

"The biggest problem right now is the plows are stuck in this as well," Ontario Provincial Police Sgt. Kerry Schmidt said during the height of the storm, adding, "They can't clear the highways, and you're not going anywhere ... if you're stuck in traffic, you might be here a while."

"We have problems," Schmidt declared in a video on Twitter addressing the Toronto portion of Highway 401 on Monday afternoon. As fast as drivers were trying to clear the snow surrounding their cars, the snow was piling up, leaving motorists stranded for hours on the highway.

Drivers struggled to make it up the highway ramps as blowing snow covered the roadways. In another video, Schmidt shared on Twitter, cars and trucks could be seen stuck on an on-ramp while the road was barely recognizable.

Some drivers told Global News that they had to shovel their own cars out of the snow. One man in a Ford-150 pickup truck said he got stuck "at least four times" while waiting for a friend with a larger truck to help him out.

"My husband has been sitting at a standstill since 7 a..m. (10 hours and counting)," one woman wrote on Twitter.

The travel conditions affected more than just people on the roadways. Schools, scheduled to open after two weeks of online learning, canceled in-person learning and bus services on Monday, according to Canada's National Observer.

High winds and blizzard conditions canceled and delayed dozens of flights at Toronto Pearson Airport on Monday. The airport staff cleared more than 1.9 square miles of snow Monday evening to ensure that operation could resume on Tuesday.

Canada Post issued a "red alert" for the Greater Toronto Area and southern and eastern Ontario on Monday, halting all mail deliveries for the day. Mail services were brought down to a "yellow alert" on Tuesday, as the weather continued to impact the retail operations.

The main threat in the days ahead for the Toronto area will be the cold weather. AccuWeather meteorologists are forecasting temperatures in the low teens with an AccuWeather RealFeel® Temperature below zero on Thursday.

Will the ‘Gates of Hell’ crater ever die out in this remote desert?