Michigan looks like winter wonderland in October as snow sweeps in

Early risers in Minnesota woke up to light snowfall dusting the ground in the early morning of Oct. 16 as we begin moving closer towards winter.

Temperatures tumbled as a preview of winter weather began moving in Friday into Saturday, leaving some areas like Houghton, Michigan, home to Michigan Technological University and located in the Upper Peninsula of the state, looking like a winter wonderland -- and forecasters say that snow could fall across several states into Sunday.

After residents of many cities in the north-central United States basked in temperatures well above normal to start the month, a snap back to reality occurred on Thursday. In many locations, temperatures were 10 to 15 degrees lower as compared to Wednesday. This meant temperatures went from near normal to well below normal.

The cold air laid the groundworks for some wintry precipitation that may be making some scratch their heads and wonder what season it is anyway. An area of low pressure ushered rain and snow showers into parts of the north-central U.S. on Friday. By Friday night, as colder air plunged southward, the rain once again mixed with and changed to snow across more of the region. 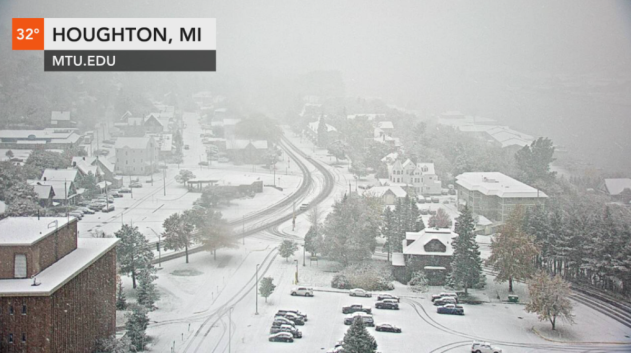 An image taken from a webcam in Houghton, Mich., showed the area looking like a winter wonderland as snow moved in on Friday, Oct. 16, 2020. (Twitter / MTU.EDU)

Although some areas had snow back in September, that wintry blast was largely confined to the higher elevations. This time, larger cities such as Great Falls, Montana, and Fargo, North Dakota, experienced their first snowflakes of the season.

During Saturday morning, a swath stretching from eastern North Dakota through northern Minnesota, northern Wisconsin and the Upper Peninsula of Michigan was getting an early taste of winter. 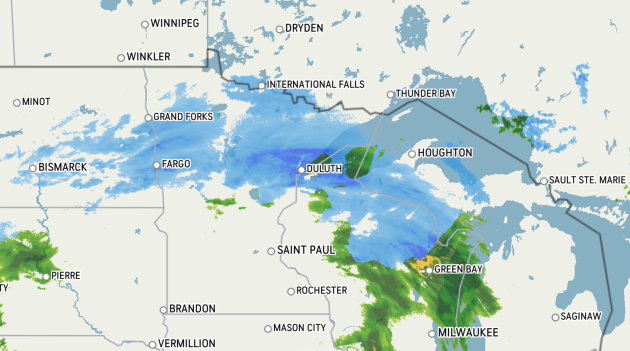 Snow (blue) is seen on radar across parts of the Midwest on Saturday morning, Oct. 17, 2020. (AccuWeather)

As this wave of snow exits into Canada by Saturday night, a narrow swath of snow is likely to sweep into the Midwest from the northern Rockies into Sunday.

It is not out of the question for a few snowflakes to fly in Omaha, Nebraska; Des Moines, Iowa; and the northwestern suburbs of Chicago Saturday night into Sunday, depending on how quickly cold air surges in.

"Regardless of where snow may fall, the unseasonable chill is certain to impact the northern Rockies, northern Plains and Upper Midwest for much of the upcoming week, especially during the first half of the week," said AccuWeather Senior Meteorologist Dan Pydynowski. "Cities such as Fargo and Grand Forks will record several days in a row with highs in the 30s and lower 40s and lows in the 20s, which is more in line with these cities' temperatures in early November."

With highs normally in the 50s F across much of the region, temperatures will be 15-20 degrees below normal.

"As Pacific storms push across the Northwest and into the Great Plains, snow may continue to streak across the North Central states into the northern Great Lakes next week," AccuWeather Senior Meteorologist Mike LeSeney said. 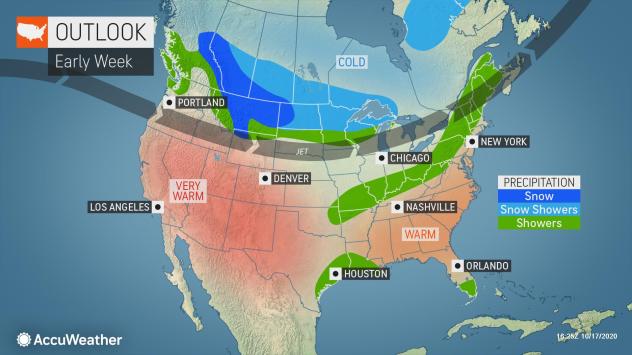 It is possible that a swath of steady snow sweeps through a portion of the Midwest, possibly into Minneapolis, by Tuesday.