Check out this calming video from the Yosemite National Park.

The same storm poised to unleash severe weather over the Mississippi Valley late this week will have a cold side and unload snow over portions of the central Rockies and adjacent High Plains.

For snow to accumulate on roads during late March, it must fall at a fast pace or do so when road surface temperatures are low. Even when the sun is not visible during the day in late March, enough rays are getting through the clouds to warm any paved and concrete surfaces that are exposed.

"The most likely, but not only, time for slippery conditions will be during the nighttime and early morning hours," AccuWeather Senior Meteorologist Brett Anderson said. 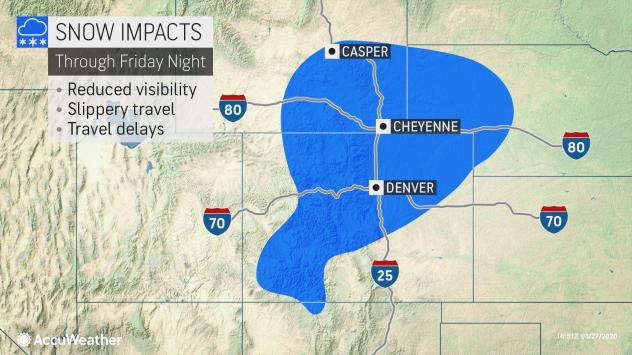 "That is likely to be the case with this storm, and motorists should be prepared for travel delays along portions of the Interstate 25, 70 and 80 corridors," Anderson said.

Roads may be primarily wet in downtown Denver, but bridges and overpasses in the area and higher elevations outside of the city can become slushy and slippery at a faster pace.

"A general 1-3 inches of snow is forecast from northeastern Colorado to western Nebraska and east-central Wyoming," Anderson said. 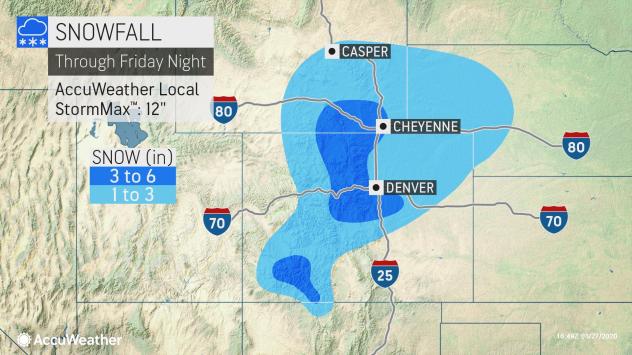 "From 1 to 3 inches is likely in the Denver downtown area, but higher snowfall is forecast for the foothills to the west, the Palmer Divide to the south and along the Wyoming border, including the Cheyenne, Wyoming, area," Anderson added.

An AccuWeather Local StormMax™ of 12 inches is forecast for the high country of the northern Colorado Rockies and the mountains west of Cheyenne.

Long-term residents in Denver and Cheyenne and other towns and cities along the eastern slopes of the Rockies and High Plains know that it is too early to put away snow shovels and plows during late March and even April. 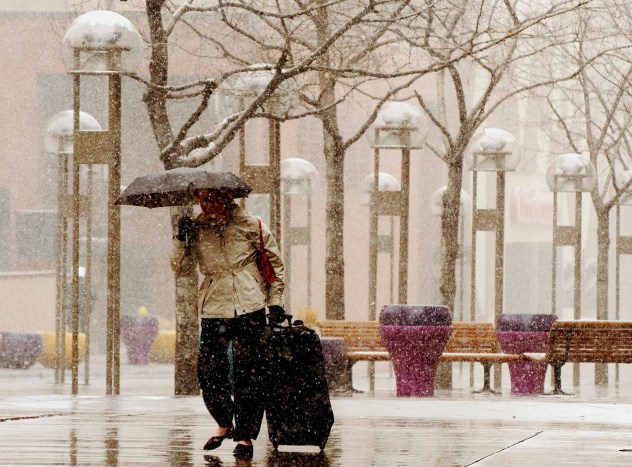 An unidentified woman uses an umbrella for cover as she pulls her baggage along the 16th Street Mall in downtown Denver as an early-spring snowstorm enveloped the Mile High City on Thursday, March 27, 2003. (AP Photo/David Zalubowski)

Snow is a fairly common occurrence during the spring along the Front Range of the Rockies. A large part of the annual snowfall tends to occur on either end of the winter season, in the fall then later in the spring.

Denver picks up an average of 56 inches of snow annually but only experiences about 6 inches of snow, on average, during February. More snow typically falls during March and April (18 inches) than January and February combined (13 inches) at the Mile High City.

During the middle of the winter, it is plenty cold enough for snow, but the storm track and ample moisture are typically well south of the region. It is when the jet stream, or storm track, is relatively nearby, that there is enough moisture around to bring big snow events.

Temperatures low enough for snow are not usually a problem during the autumn and spring in the region, when compared to say the Mississippi Valley or the Atlantic coast. This is because when air blows uphill from the lower Plains to the foothills and Rocky Mountains it cools considerably. Temperatures can plummet by 20, 30 and 40 degrees Fahrenheit or more with an easterly or northeasterly wind, following a day with high temperatures in the 50s and 60s.

In the case of Denver this week, following high temperatures in the middle 60s on Wednesday and Thursday, the storm will cap temperatures to no higher than near the 50-degree mark on Friday, followed by plummeting temperatures and snow by Friday night.