People throughout the Northeast, especially near the Great Lakes, saw their first snowfall of the season on Nov. 2.

The first significant lake-effect snow of the season dropped nearly a foot of snow near the shores of the Great Lakes Tuesday into Wednesday. The snowfall was enough to transform parts of Michigan's Lower Peninsula into a winter wonderland and break into the record books at one weather station in Michigan.

Snow totals topped 11 inches in northern parts of northern Michigan. Gaylord, Michigan, picked up 11.7 inches of snow on Tuesday, which set a record for the heaviest snowfall in a calendar day in November. That amount also ranked as the sixth highest single-day snowfall in any month. Records have been kept at the National Weather Service (NWS) office there since 1998.

In Gaylord, which is about 225 miles north of Detroit and just to the east of the upper reaches of Lake Michigan, NWS meteorologists posted a slow-motion video on Twitter showing large snowflakes coming down outside of the office there on Tuesday.

Into Wednesday, temperatures remained in the low to mid-30s in Gaylord, as snow flurries continued to fall. The average high temperature there at this time of year is 47 degrees Fahrenheit, but temperatures couldn't make it above the mid-30s Tuesday and Wednesday, though the area was poised for a rebound in the days ahead, according to the AccuWeather forecast.

This is just the beginning of what could be a blockbuster lake-effect snow season, according to AccuWeather forecasters. With few cold outbreaks in October, each of the Great Lakes has a fever, so to speak. With water temperatures several degrees above normal, most of the lakes have set new records for this time of year according to NOAA CoastWatch, which maintains records back to 1995. 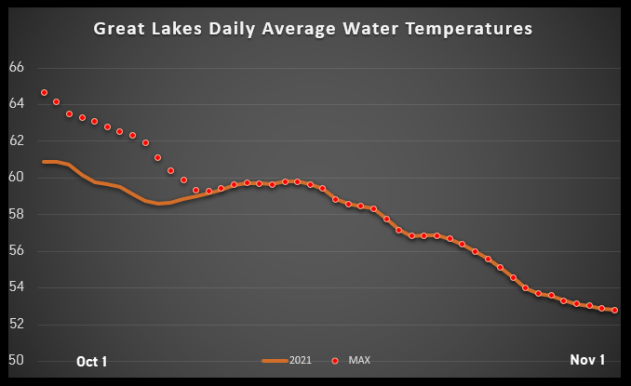 In fact, NOAA reported the average temperature of all five Great Lakes has set a daily record each day since Sept. 29. The warmer the lakes, the more potential for snow records to fall as more cold air pours over the lakes in the upcoming weeks.

Because of recent warm weather, Department of Transportation cameras showed roadways that appeared passable but slippery, with snowfall concentrated largely on the median and grass surrounding the highways rather than on top of the pavement. 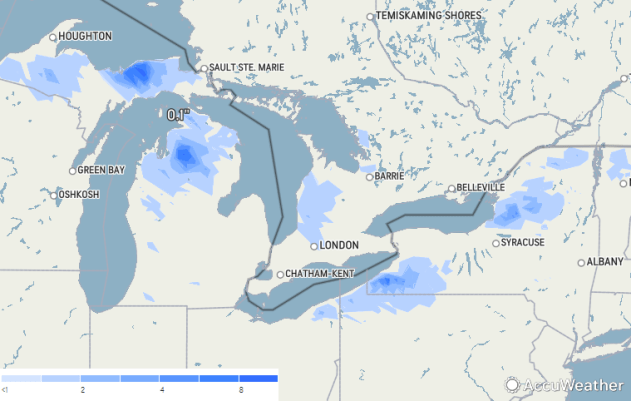 But as the winter solstice approaches and the angle of the sun lowers along with temperatures dropping, untreated roads and surfaces are more likely to gather accumulation during these types of lake-effect snow events.

Correction: This story previously misstated the number of Great Lakes. There are five, not six. However, the National Oceanic and Atmospheric Administration classifies Lake St. Clair as part of the Great Lakes system for temperature monitoring purposes.