Arctic air will settle into the Rockies and northern Plains, fueling conditions favorable for measurable snow.

March is often a month of wild temperature swings, and this year has been no different. AccuWeather forecasters say that harsh cold will send temperatures trending downward through the remainder of this week in the Plains and Midwest with the official start of spring less than two weeks away.

The cold air began to pour into the northern Plains on Thursday. Minneapolis topped out at only 26 degrees Fahrenheit Thursday, and while that is not harsh by Minnesota standards, the normal high for this time of year in the Twin Cities is around 39 degrees as average temperatures begin to climb at a rapid pace in March. 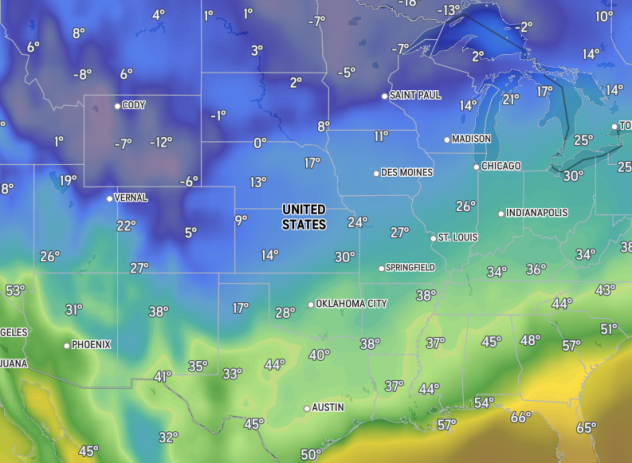 Temperatures across the central U.S. ranged from the single digits in the northern Plains to the upper 50s along the Gulf Coast on Thursday morning, March 10, 2022.

However, it will take until Friday for the truly frigid air to arrive.

Minneapolis will struggle to reach the mid-teens on Friday as temperatures remain about 25 degrees below normal. The mercury is likely to plunge below zero on Friday night, forecasters say.

The cold air will not only affect the northernmost states and has already set record lows as of Thursday morning.

Denver set a record low of 7 below zero Fahrenheit, breaking the previous daily mark for March 10 of 3 below zero that had stood since 1932. 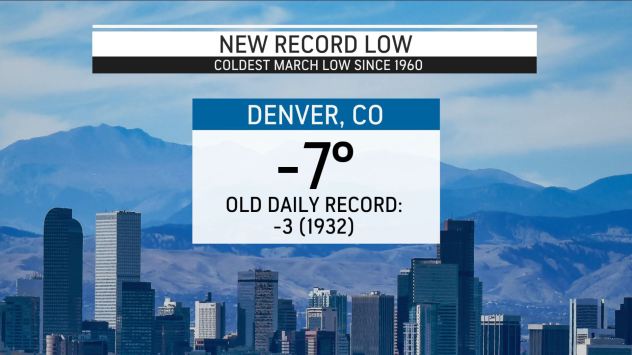 "Below-normal temperatures will surge across the South Central states on Friday and Saturday as the jet stream dips southward and ushers in a blast of Arctic air," said AccuWeather Meteorologist Alyssa Smithmyer.

One such location will be Wichita, Kansas. After each of the first five days of the month had temperatures 76 degrees or higher, the mercury each day since then in Wichita has failed to top 50 degrees. Typically, a high temperature of 57 degrees is expected heading into the middle of March.

While the heaviest snow of 6-12 inches will fall in northern Kansas to near the Kansas City, Missouri, metro area, snow is also expected during Thursday night in Wichita, and temperatures will not recover much on Friday. "Residents around Wichita can expect highs in the middle 30s on Friday," stated Smithmyer. 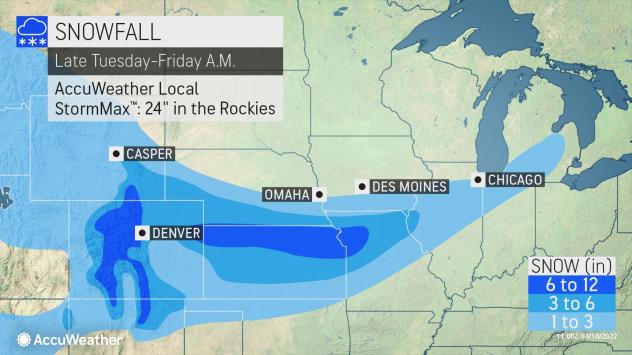 The Arctic plunge will even reach much of the Lone Star State. Highs have reached 80 degrees twice already this month in Dallas, but temperatures will be nowhere near that as the week winds down.

The high of 67 degrees on Thursday, very close to the normal high of 66, will be a distant memory in Dallas by Friday. In fact, some wintry precipitation is expected.

"Temperatures on Friday will only be in the 30s with a mixture of rain, sleet and snow in the forecast, followed by a freeze-up Friday night," said AccuWeather Senior Meteorologist Alex Sosnowski. 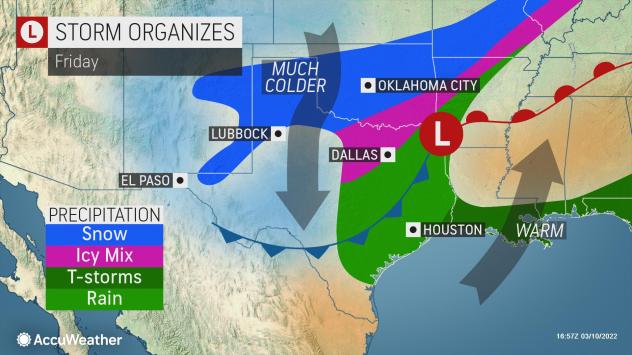 With the sun getting higher in the sky and the days getting longer as March presses on, cold air does not often have the same staying power that it would have a month or two ago. The temperature roller coaster will continue into the weekend as warmth begins to build.

Residents in Wichita, and other cities such as Springfield, Missouri, will experience daytime temperatures in the 60s as a more forgiving pattern develops across the Central states near the end of this weekend, according to Smithmyer. 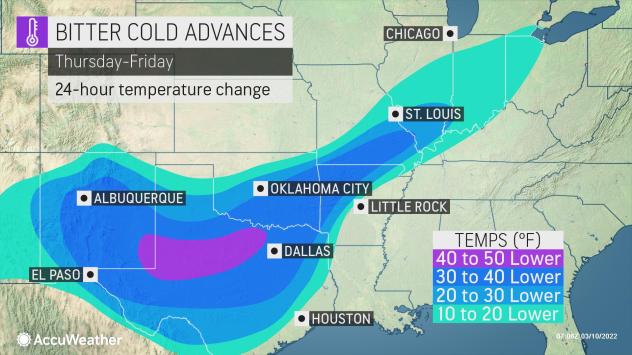 While this may be the final cold push of the season in Texas, snow and cold can persist well into April and early May farther to the north. However, it appears that temperatures in much of the Plains and Midwest will range 5-15 degrees above normal for most of next week.