As a front moves eastward towards the Florida Peninsula, gusty winds, severe thunderstorms and tornadoes are possible, which could prompt travel delays ahead of Christmas.

For the latest forecast story on the tropical development in the Gulf, click here.

Tropical Depression Three formed just east of Florida on Monday evening but lost its chance to develop into a tropical storm due to increasing wind shear in the region. However, there is another area to watch in the nearby tropics.

The tropical rainstorm will continue to produce sustained wind gusts to 30 mph and higher as it drifts on a curved path to the north-northeast. 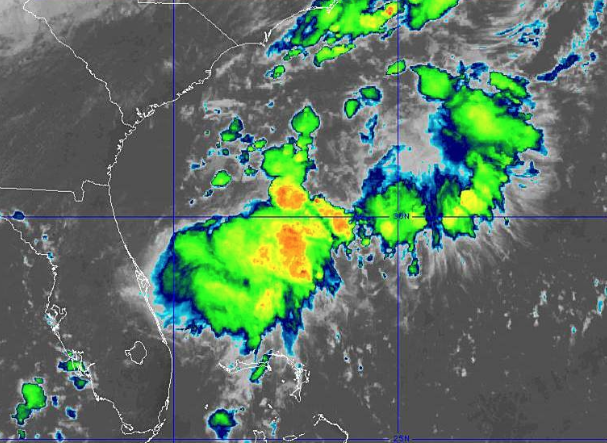 This image shows the area of disturbed weather just east of Florida, shortly after it was downgraded from Tropical Depression Three to a tropical rainstorm on Tuesday, July 23, 2019. (NOAA / Satellite)

A tropical storm has maximum sustained winds of 39 mph to 73 mph.

The center of the disturbance is forecast to remain east of Florida, Georgia and South Carolina. Dry air immediately west of the feature will limit the amount of thunderstorms over the Florida Peninsula for a time.

However, as the disturbance pulls away, moisture from the Gulf of Mexico will trigger showers and thunderstorms over the peninsula into Wednesday.

The tropical rainstorm is expected to be picked up by a rare midsummer cool front that dips into the Southeast states. 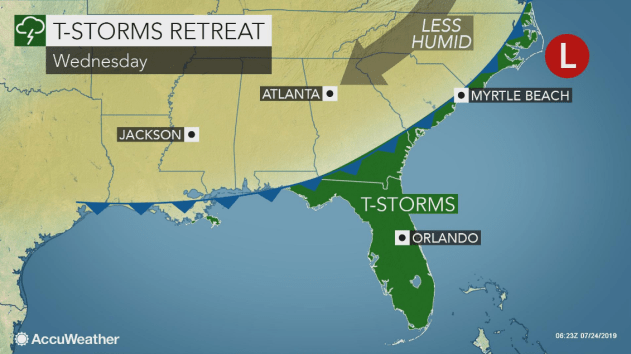 The downpours associated with the front will be heavy enough to trigger incidents of torrential downpours and flash flooding.

The tropical moisture associated with the feature may enhance downpours along the immediate North Carolina coast on Wednesday.

Even in lieu of any strengthening and re-organization over the next few days, gusty squalls may pose hazards for boating, cruise and shipping interests along the Atlantic coast. Most of the strong winds will be well off the coast, but waves will propagate outward.

In case you missed it: Barry dumps heavy rain over Louisiana, Arkansas; Deadly mudslides kill over 100 in India, Nepal
6 ways to prepare now for hurricanes
AccuWeather’s new RealImpact™ Scale for Hurricanes will revolutionize damage predictions for greater public safety
Storm surge: Explaining the fury and science behind one of nature’s most potent forces

"Choppy seas and downpours associated with the feature can create less-than-ideal sailing conditions for those on cruise ships across the southwestern Atlantic," according to AccuWeather Senior Meteorologist Brett Anderson.

Beachgoers taking a swim in the ocean should be aware of an increased risk for frequent and strong rip currents from Florida to North Carolina.

A push of dry, cool air will keep the center of the feature offshore of the mid-Atlantic and New England states, as well as the Canadian Maritimes and Newfoundland late in the week.

Tropical feature may slowly brew in Gulf of Mexico

While the former Tropical Depression Three will continue to fall apart near the East Coast of the United States, the Gulf of Mexico is another area to watch for possible tropical development in the coming days.

The tail end of the same front will stall over the Gulf of Mexico later this week and this weekend.

As showers and thunderstorms associated with the front coagulate, there is the chance another tropical system slowly evolves over the warm Gulf waters. 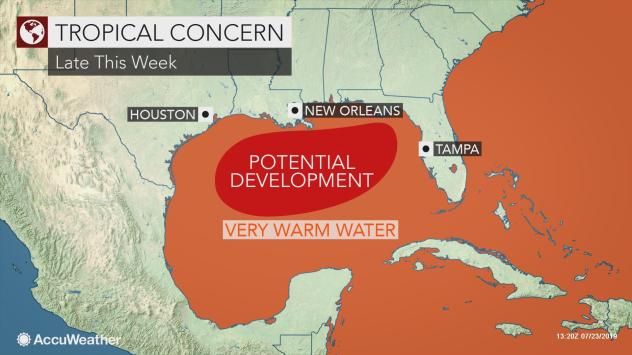 Steering winds will be weak in the Gulf of Mexico; however, it is possible that any feature, should it develop, may wander toward the Texas or central Gulf coast this weekend into next week.

Residents and visitors in this area should monitor this situation. At the very least, an uptick in downpours and gusty thunderstorms seems likely this weekend to next week along the western and upper Gulf coast.

It was a non-tropical storm that caused gusty thunderstorms, torrential rain and strong winds in the coastal northeast from Monday night into Tuesday.

That storm produced a wind gust to 90 mph in Barnstable County, Massachusetts, during the midday hours on Tuesday.

Flooding occurred in part of the New York City area during Monday evening. New York's JFK International Airport received 3.57 inches of rain in less than 24 hours. Much of the rain fell between 6 and 7 p.m. Monday and 6 and 8 a.m. Tuesday.

Download the free AccuWeather app to remain aware of tropical updates. Keep checking back for updates on AccuWeather.com and stay tuned to the AccuWeather Network on DirecTV, Frontier and Verizon Fios.