Waves of chilly air will bring opportunities for snowflakes and accumulating snow in parts of the central and northeastern United States through the end of October.

"While cooler air will reach the Atlantic coast, the main thrust of chilly air and greatest chance of snow is likely over the Central states in the short term," according to AccuWeather Lead Long-Range Meteorologist Paul Pastelok.

The waves of chilly air will deliver the lowest temperatures of the season so far to many portions of the Plains and the Midwest during the next five to seven days. 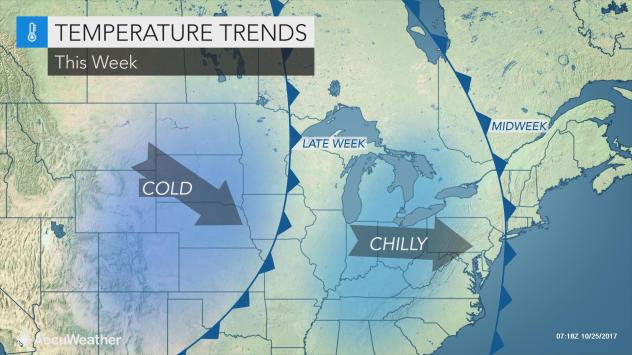 As the chilly air passes over the relatively warm waters of the Great Lakes, waterspouts are likely to form.

Gusty winds will accompany the chilly air, especially in the Central states.

Some frosty mornings are possible in the Ohio and Tennessee valleys, where winds are able to diminish.

The pattern will feature some days with highs in the 40s, or 10 to 15 degrees below average, around Chicago.

Meanwhile, temperatures will return to seasonable levels for much of the coastal Northeast. Some frost is likely in the normally cold spots of the mid-Atlantic and New England states during the latter part of the week. 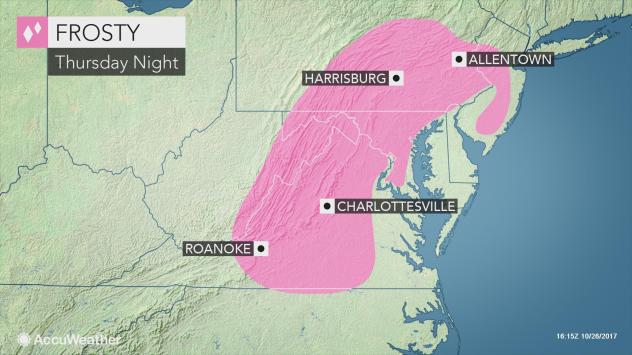 In the swath from Boston to New York City, Philadelphia and Washington, D.C., high temperatures in the 70s will be swapped with highs in the 60s most days, starting on Wednesday.

"While we expect temperatures to briefly rebound a bit at midweek, a second and more substantial push of cool air will follow," Pastelok said. "Once again, the main thrust of the chilly air will be over the Central states and not the mid-Atlantic and New England coasts."

By late this week, parts of the central and northern Plains can expect lows in the lower to middle 20s with a hard freeze.

The second chilly push will cause a period of snow to spread southward along the Rockies and adjacent High Plains on Wednesday and Thursday.

The main storm associated with this second push of chilly air is likely to produce a swath of moderate to heavy snow much farther east. 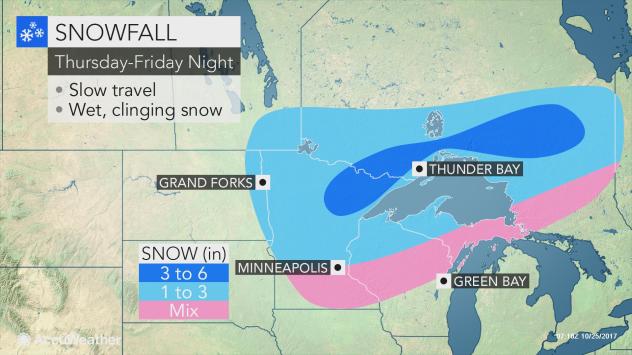 "Parts of eastern North Dakota, northern Minnesota, northernmost Wisconsin and a portion of the Upper Peninsula of Michigan may be hit with several inches of snow spanning late Wednesday night to early Friday," according to AccuWeather Meteorologist Brett Rossio.

"Part of this area may receive 6 inches of snow," Rossio said.

Enough snow may fall to whiten the ground around Minneapolis.

As the pattern continues to evolve, enough chilly air may gather with sufficient moisture to bring more doses of snow even farther east this weekend to the end of October.

As the second wave of chilly air settles around the lower Great Lakes this weekend, some wet snowflakes may mix with the rain showers.

Depending on how far east the second batch of chilly air settles, it may encounter a storm along the Eastern Seaboard.

Should these two weather features come together in a timely manner, a dose of accumulating snow could develop in parts of the central and northern Appalachians on Sunday and into Monday.

The same setup may bring a dose of heavy rain and gusty winds to coastal areas of the Northeast, perhaps more intense than that of early this week.

So following months of unusual warmth, it seems that winterlike conditions will be creeping up on the North Central states and perhaps parts of the Appalachians during the last part of October.