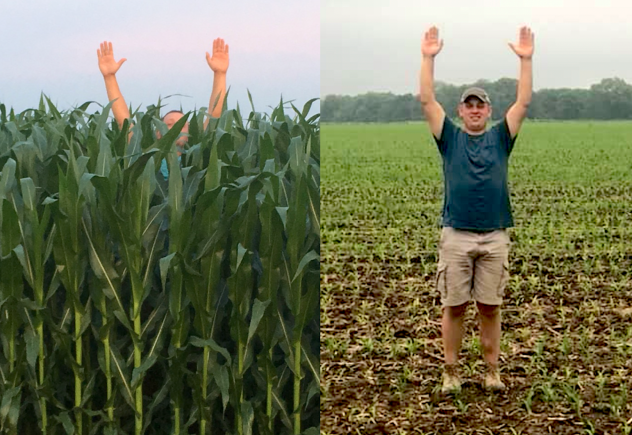 In the photo on the right, Kyle Cline, a farmer in Roachdale, Indiana, poses with his arms aloft in one of his cornfields. The stalks growing this year are a far cry from where they were last year at this time when he struck the same pose, as shown in the photo on the left, illustrating the struggle Cline and other farmers are facing this year as a result of a very rainy spring. (Photo courtesy of Tori Cline)

A recent Facebook post featuring two photos taken exactly one year apart has gone viral and is visual proof of the difficulties many farmers in the Corn Belt are facing in 2019.

“This is a great representation for people who are outside of the ag world and don’t understand what is going on,” Katie Staton told AccuWeather. Staton’s post racked up 58,000 shares and counting in just two days.

The photos were taken by Tori Cline of her husband Kyle Cline as he stood in their cornfield in New Ross, Indiana, in 2018 and again, in the very same spot, in 2019. Staton, who works for BA Genetics, an independent seed company in Indiana, asked if she could post her friend’s pictures and the words Tori had written about them.

“These two pictures speak volumes to the crisis American farmers are facing this spring,” Cline wrote. “Kyle is 6’3” and the corn was nearly above his head [in 2018]. Most corn around our area is lucky to be out of the ground [in 2019], let alone knee high ... I pray for those who didn’t or still haven’t gotten their crops in -- for their safety and mental health. This year will be one to remember."

AccuWeather senior meteorologist Jason Nicholls agrees, adding, “These pictures are the two extremes; this year is probably the farthest behind and last year was a great example, at least in Indiana, of the best you could expect on June 17. Everything went right in that area last year.”

That’s not the case this year, and Staton, who lives in Fort Wayne, is seeing it firsthand. “The corn is hardly coming through the ground right now.”

The latest USDA Crop Progress showed 84% of Indiana’s corn was planted by June 16 compared to a five-year average of 100%. And that’s up from just 31% on June 2; the state’s five-year average for that date is 94%.

“This year in Indiana, it’s way behind -- I mean way behind -- so the weather for the rest of this season has to be near perfect or they’re not going to harvest a normal crop,” Nicholls said. “That crop is probably going to be 10 to 20 percent less than you would normally see. And at some point later this summer, farmers are going to have to decide if they end up just chopping it up and feeding it to the cattle or do they try to hang on.”

Cline, who works for the Farm Service Agency, told AccuWeather she and her husband have done all they can and are now just keeping an eye on the sky. "We have worried about it and there's not much else we can do from here on out to make the yield better," Cline said. "We can just hope for better days and more sun. As I sit here in the car and we're getting more rain."