Tropical moisture is expected to converge on the southwestern United States early next week, bringing a heightened risk of flash flooding and mudslides despite ongoing drought.

Tropical moisture is expected to converge on the southwestern United States early this week. Despite an ongoing drought, the heavy rain could bring a heightened risk of flash flooding and mudslides.

There is the potential for a significant, heavy rain event across the Southwest, especially Arizona, from Sunday night through Tuesday, according to AccuWeather Senior Meteorologist and western U.S. blogger Brian Thompson.

A non-tropical storm associated with a large dip in the jet stream is expected to drop southward across the West during this time frame.

Ahead of this storm, moisture will be drawn northward from the tropics. Some of this moisture will be associated with Tropical Storm Lorena, which is bringing heavy rain and strong winds to parts of western Mexico through Sunday.

This type of the setup has the potential to produce more than a month's worth of rain in a few hours. Phoenix typically receives 0.64 of an inch of rain during September, while Flagstaff, Arizona, averages over 2 inches.

An AccuWeather Local StormMax™ of 6 inches is forecast. 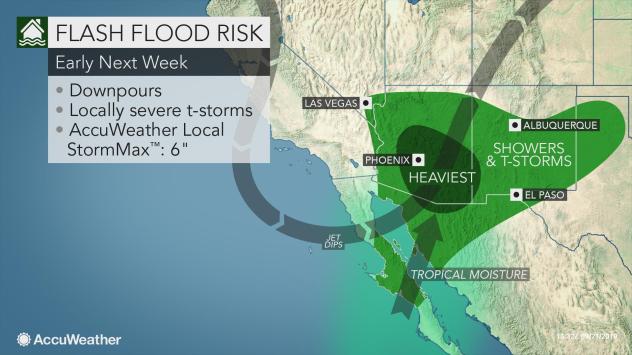 "Any non-excessive rain that were to fall on the region would be welcomed," AccuWeather Senior Meteorologist Alex Sosnowski said.

Drought conditions have grown considerably across the Southwest over the past few months due to a lack-luster monsoon season. While Arizona was free of drought during the middle of June, over 85 percent of the state is enduring moderate to severe drought, according to the latest outlook by the U.S. Drought Monitor.

AccuWeather meteorologists are concerned, however, that this event will produce too much rain in a short amount of time.

"Enough rain may fall to trigger flash flooding and debris flows, due to the arid terrain in the region," Sosnowski said.

Dry stream beds, known as arroyos, which have been dry over the past few months may suddenly fill with rushing water.

People with normal commutes or long-term travel plans across the region early next week should be mindful of the threat for flash flooding and be on the lookout for flooded and closed roads. Remember to turn around and find a safer, alternate route when floodwaters are encountered.

In addition to the risk for flooding, there is the potential for feisty thunderstorms capable of producing hail and damaging winds.

How dangerous is it for untrained bystanders to perform water rescues?
5 dangers to be aware of after a flood strikes
How extreme weather led to one of the 20th century’s most iconic photos

"While Arizona has the best chances of getting significant rain, portions of southeastern California and New Mexico could also get in on the rain," Thompson said.

The rainfall should assist fire crews battling ongoing blazes across the region and put a temporary end to the risk of new wildfire ignition.

However, on the northwestern side of the storm, building warmth and dry, gusty winds will create heightened wildfire dangers across Northern California early this week.

Even coastal communities will experience the warmth, with the San Francisco Bay Area expected to hit the 80s F during Tuesday and Wednesday of next week.

"With these warm, dry conditions, any wind that kicks up with it will increase the fire danger," Thompson said. "We're now heading into prime wildfire season across California, so staying on guard is important."

Download the free AccuWeather app to stay aware of the latest forecast for your location. Keep checking back for updates on AccuWeather.com and stay tuned to the AccuWeather Network on DirecTV, Frontier and Verizon Fios.