Tornadoes have hit 6 states with unusual frequency in 2019, and 1 state has seen 4 times its average 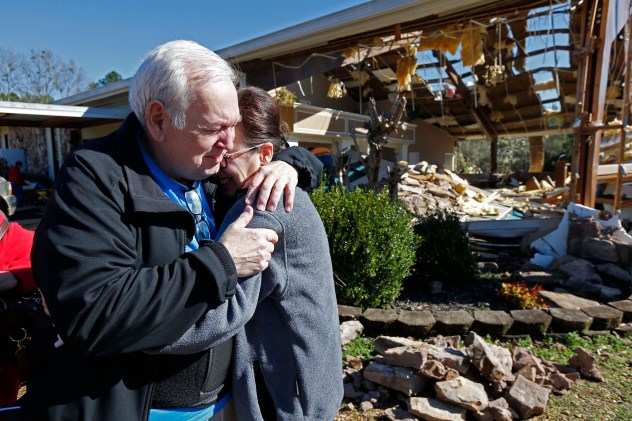 Pastor Steve Blaylock, left, comforts his wife Pat Blaylock, amid the rubble that was once the First Pentecostal Church in Columbus, Miss., Sunday morning, Feb. 24, 2019. A tornado Saturday wreaked havoc in the community, destroying a number of businesses as well as damaging and destroying homes. (AP Photo/Rogelio V. Solis)

Mississippi has experienced a historic start to the tornado season in 2019.

A state with an average of 21 tornadoes through April has seen roughly four times as many, with 83 through the first four months of the year, according to data from the National Oceanographic and Atmospheric Administration (NOAA). The tornado data is preliminary and subject to revision.

The Magnolia State averages 45.1 tornadoes a year and has already been hit with more twisters this year than each of the last four full years. Mississippi suffered a worse start in 2011 when a whopping 131 tornadoes touched down through April, largely a result of the four-day 2011 Super Outbreak that struck the southeastern U.S., resulting in $11 billion in damages and leaving an estimated 321 people dead.

Other states have experienced an above-normal start, too; Alabama (71 tornadoes compared to an average of 22 through April), Georgia (53 compared to 14) and Missouri (44 compared to 16) also have been uncharacteristically hard hit early.

Other less tornado-prone states with above-normal activity so far include Virginia (19 compared to an average of 3), and Pennsylvania (15 compared to 2). The list of top 10 states with the most tornadoes in 2019 appears at the bottom of this article.

“This season is being remembered so far by what happened in the early part of March with the big tornado outbreak during which 23 people died -- that surpassed the death toll [of 10] easily from all of last year,” said AccuWeather Lead Long-Range Meteorologist Paul Pastelok. “Some very destructive tornadoes have already been seen this season across the South and Southeast and we do feel it’s still going to be rough through the early part of May.” 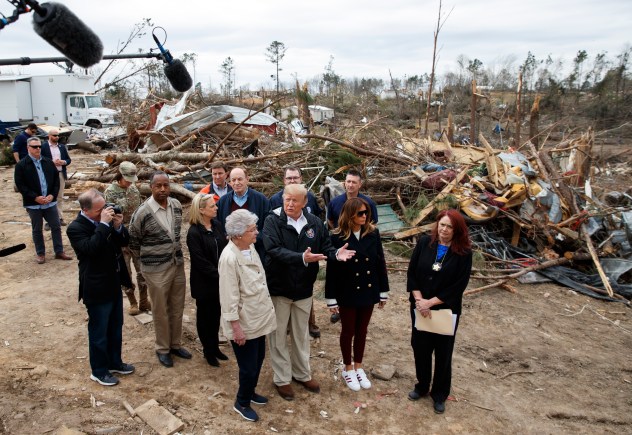 Mississippi had 44 confirmed tornadoes on April 18 and 13 on April 13, including three EF2 tornadoes in Vicksburg.

The number of tornadoes that have hit some areas of Mississippi, such as Vicksburg, is “absolutely unprecedented,” Vicksburg Mayor George Flaggs, a 66-year-old lifelong resident, told AccuWeather. “In 1953 we had a devastating one hit the downtown area and that probably impacted the city the most. But this year’s tornadoes [on April 13] were more widespread than that -- it hit the city, the business district and then residential areas.”

Violent storms to keep pulsing through south-central US through midweek Flooding likely to continue on Mississippi, other rivers in central US into June Evacuations ordered following levee breaches along Mississippi River north of St. Louis Late-week heat to soar to record levels across Pacific Northwest

There have been 545 tornadoes nationally through May 6, according to NOAA. Historically, an average of 321 tornadoes occur in the U.S. through the end of April, based on a 25-year average.

AccuWeather predicts there will be roughly 325 tornadoes nationally in May and roughly 200 in June. The 25-year average is 269 for May and 229 for June as tornado season typically eases up later in the summer and into the fall.

That doesn’t mean places like Vicksburg won’t be ready for anything. “Vicksburg people are resilient -- they tend to turn toward each other in times of crisis,” Flaggs told AccuWeather. “We have our emergency management team keeping people alert through texts, emails and all of social media. We prepare as best as we can.”

Tornado Tally
Here are the top 10 states hit by tornadoes in 2019. The NOAA data is preliminary through May 6 and not confirmed.