Flooding will remain a significant concern in Northern California early this week as a snowstorm unfolds in the lowest elevations of the I-5 corridor in western Oregon.

Heavy rain will continue to stream into the lower elevations of southwestern Oregon and Northern California through Monday.

Farther north, enough cold air is expected to be in place for a disruptive snowstorm to hit the heavily populated Interstate 5 corridor of Oregon and southwestern Washington. 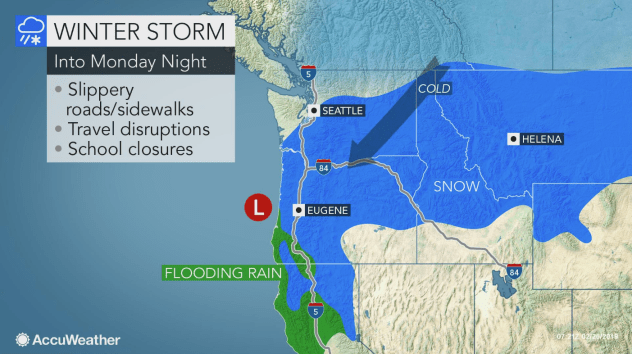 While Seattle is expected to escape the snow, the potential for school closures, significant flight disruptions and slow and slippery travel for the Interstate-5 corridor may focus on areas from Portland to Eugene through Monday evening.

"Snow could already be falling by the start of the morning commute on Monday in Portland and will persist through the day," according to AccuWeather Senior Meteorologist Dan Pydynowski.

A total of 2-4 inches of snow can whiten the city to start the week. The heaviest snow totals can be measured on grassy surfaces, but roads can still become slushy and slippery. 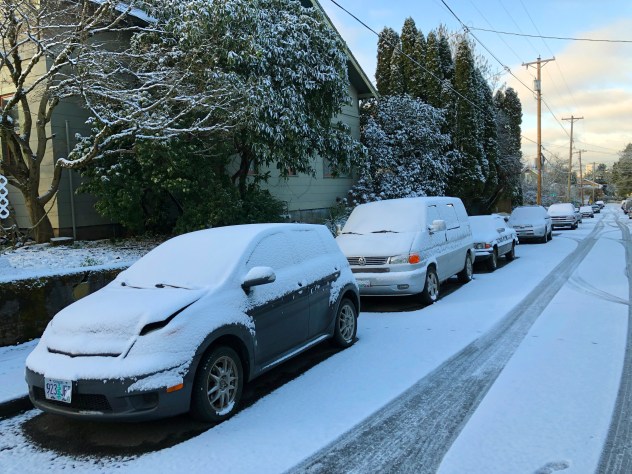 This was the scene in Portland, Oregon, earlier in February when a winter storm brought snow and icy conditions. (AP Photo/Richard Vogel)

The combination of a breeze, snow and cold can hold AccuWeather RealFeel® Temperatures to the 20s in Portland on Monday, when highs in the lower 50s are more common.

Even more treacherous travel can be anticipated farther south along I-5.

The worst of the snowstorm can unfold between Portland and Eugene, where there can be heavy snow for a time and totals in excess of 6 inches.

AccuWeather meteorologists are concerned that Salem and Albany may lie in the bullseye of this heavier snow band.

It is not out of the question for snowfall rates to exceed 1-2 inches per hour on Monday morning. Snow plows in the region will have difficulty keeping up with the heavy snow, and motorists traveling during the height of the storm can become stranded.

Snow can even fall heavily enough for a few inches of snow to make roads slippery and slushy around Eugene and may even whiten a stretch of the northern and central Oregon coastline.

More snow will streak across the interior Northwest early this week, bringing another round of slippery travel to stretches of I-90, I-84 and I-15. 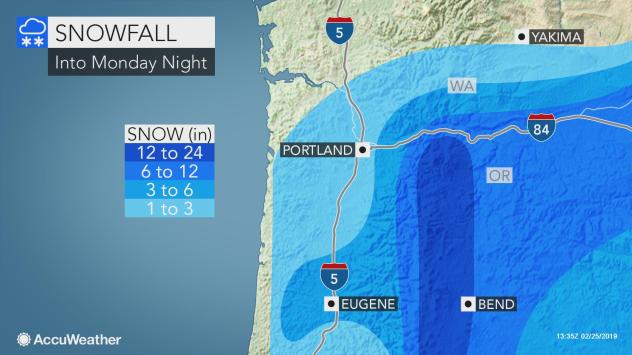 In addition to Pendleton and Bozeman, cities that can face disruptions to travel and daily routines include Yakima and Spokane, Washington; The Dalles, Oregon; Lewiston, Idaho; and Missoula and Great Falls, Montana.

Following the snow from this weekend, a fresh 4-8 inches is expected in Pendleton and the Dalles.

Into Tuesday, feet of snow will bury the Cascade Mountains in Oregon, as well as the mountains of Idaho.

Officials may be forced to shut down travel through the mountains for a time, including Government Camp and Santium Pass.

Most of Washington and Oregon's I-5 corridor can dry out on Tuesday, but AccuWeather meteorologists are monitoring the possibility of another round of snow to push back to the north at midweek.

Snow could make another appearance in Seattle if this scenario pans out.

While there can be a break in the snow farther north, heavy rain and mountain snow are expected to keep streaming into Northern California through midweek. 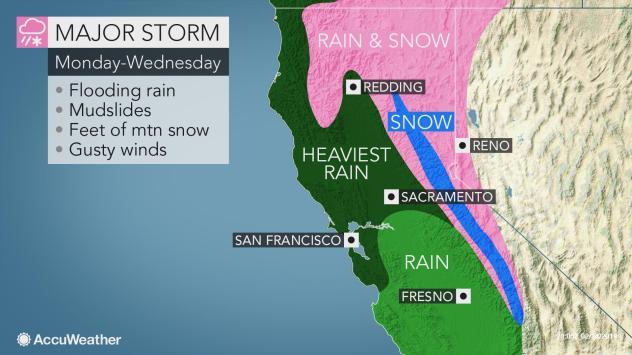 Rainfall totals over the next several days can total 4-8 inches along the western slopes of the mountains. The risk for flooding and mudslides endangering lives and property will be high, including in the recent burn-scar areas.

While the heaviest rain is expected to the north, rain and gusty winds can still lead to flight delays and a heightened risk of motorists hydroplaning when traveling at highway speeds in San Francisco and Sacramento.

Feet of snow can bury the northern Sierras through midweek, renewing the avalanche danger. Chain restrictions and road closures can be anticipated along I-80's Donner Summit.

Fluctuating snow levels can also lead to snow and slippery travel at times through the higher elevations on I-5 in Northern California and far southern Oregon.

Download the free AccuWeather app to find out how much snow or rain is expected in your community.