For the first time in recorded history, a pond of water has been discovered inside the Halemaumau crater of the Kilauea volcano in Hawaii. It was confirmed by the USGS on August 2. This raises concerns from scientists for more explosive eruptions in the future.

Scientists have made an unprecedented discovery in Hawaii's most active volcano. Researchers with the U.S. Geological Survey (USGS) confirmed last week that there is water at the bottom of the summit crater of Hawaii’s Kilauea volcano, which they say is "unusual" because there has never been a pond of water observed there in recorded history.

USGS-Hawaiian Volcano Observatory (HVO) scientists made the unusual discovery after receiving a tip from the public about the presence of apparent water in the volcano crater, according to HVO scientist emeritus Don Swanson.

Swanson, writing in a blog post for the USGS, revealed that a friend of his had received a photo from a helicopter pilot who flew over the volcano and noticed what appeared to be a green pool of water "about as large as a pickup truck." A subsequent flyover resulted in more photos of the apparent pond.

A passenger in another helicopter also caught a glimpse of the mysterious green feature and posted a photo of it on social media, Swanson said. That was enough for HVO researchers to want to take a look for themselves. 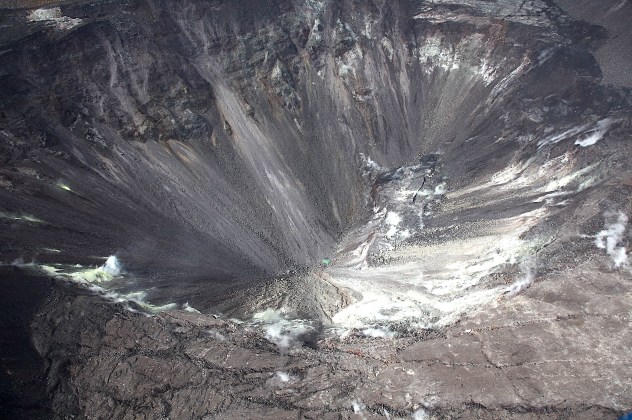 Aerial view of Halema'uma'u at the summit of Kīlauea taken during a USGS-Hawaiian Volcano Observatory helicopter overflight on August 1, 2019. The small green patch visible within Halema‘uma‘u is a new pond forming at the lowest point of the crater. (USGS photo by S. Conway)

HVO scientists flew over the summit of Kīlauea last Thursday and they saw reflections from the green pond at the bottom of Halema‘uma‘u, Swanson reported -- "the smoking gun for water," as he put it.

Although scientists remain unsure as to what the water may bring, they are aware that water mixing with lava can create explosive eruptions.

With the presence of water confirmed, HVO scientists can now start thinking about the implications of water in the crater. Until they better understand where the water is coming from, they say it is impossible to understand its significance. 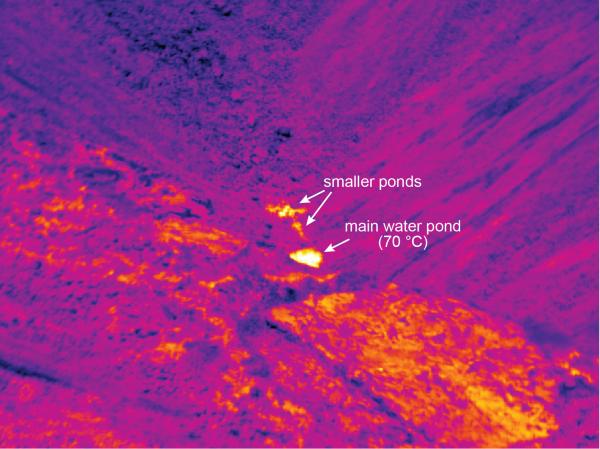 A close-up of the water ponds at the bottom of Halema‘uma‘u captured with a zoom lens on the thermal camera. The smaller bright patches above the main pond show areas of warm water in the smaller ponds. (USGS image by M. Patrick)

The researchers aren’t exactly certain what will happen next, but Swanson told The Associate Press in an interview that one possibility is that lava could slowly heat up the groundwater and eventually create a new lava lake. Lava could also interact with the water table and create small explosions.

“The other possibility is that magma rises rapidly,” Swanson said told the AP. “That could produce a larger explosion.”

The pond has already grown slightly in size and depth between the dates of July 25, when it was first noticed, and Aug 1. The two pictures below show an “x” marking the same rock in both photos for comparison.

Telephoto views of water in the bottom of Halema'uma'u taken during a helicopter lidar survey on July 25, 2019 (left), when the pond was first observed, and a USGS overflight on August 1, 2019 (right). The pond grew slightly in size and depth between the two dates; an “x” marks the same rock in both photos for comparison. (Left photo: Ron Chapelle, Quantum Spatial. Right photo: USGS photo S. Conway)

The pond is situated at about 1,722 feet (525 meters) elevation and deep inside of a crater. The inaccessible location of the water makes it impossible to see the pond from most parts of the crater rim, although one potential viewpoint will be examined in the future, Swanson said.

If that viewpoint shows the water, USGS will install a webcam, with permission from the National Park Service, to monitor the new pond. If not, remote sensing could be another option for continued observations. 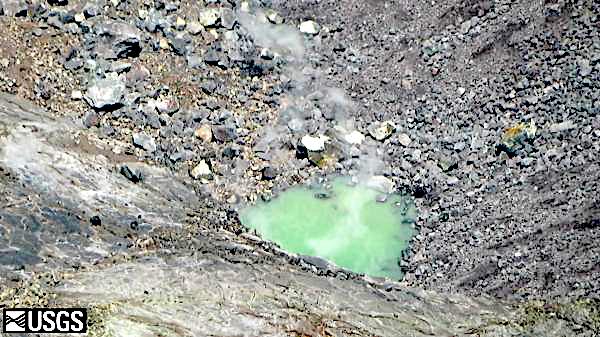 This image shows steam from the main pond of water at the bottom of Halema‘uma‘u as captured on Sunday, August 4.

In an interview, Swanson told the AP that while researchers haven't seen water on the caldera floor before, there are native Hawaiian chants that describe the presence of ponds appearing just before explosive events.

Even though lava mixing with water can cause explosive eruptions the scientists believe there is no reason to think hazards at the summit have increased or decreased because of the presence of water. 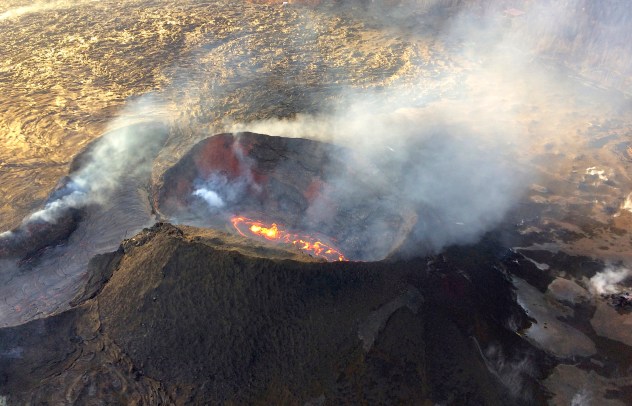 Kilauea is the youngest and most active Hawaiian shield volcano, located on the southern part of the Island of Hawaii. Kilauea volcano was almost constantly erupting for more than 30 years, and was in the midst of one of the most long-lived eruptions known on Earth, which started in 1983 and ended last year.

Some 700 homes were destroyed and an estimated $800 million in damage was caused in 2018 when Kilauea began spewing dramatic amounts of lava in early May and didn't subside until early to mid-August.

Kīlauea volcano is not currently erupting and its USGS Volcano Alert level remains at normal for now. Residents and visitors near the 2018 fissures, lava flows, and summit collapse area should heed Hawai‘i County Civil Defense and Hawaii Volcanoes National Park closures and warnings.

Correction: An earlier version of this story misstated the estimated total damages cause by Kilauea's 2018 eruption. The total figure is $800 million, not $800 billion.