As of 12:10 a.m. EST Saturday, the reports below are no longer being updated. Click here for a photo recap of the storm.

A powerful bomb cyclone will continue to slam the northeastern United States into Friday night with damaging winds, coastal flooding and heavy snow.

Winds have gusted past 60 mph across many areas from Virginia through Massachusetts, leading to thousands of flight cancellations and over 2 million power outages across the region.

Snow will also persist across some of the interior Northeast before tapering off on Saturday morning.

Cobleskill, New York has received 39.2 inches of snow with snow still falling, according to a National Weather Service trained spotter. This is the highest snowfall total reported so far from this storm.

Conditions will deteriorate along the coast of New England in the coming hours as high tide approaches. People near the coast should avoid floodwaters and listen to local officials. High tide in Boston will occur at 11:46 p.m. EST.

Major Coastal Flooding & Severe Beach Erosion: We're approaching the next high tide in E MA which occurs at 11:46 pm in Boston & 12:52 AM on Nantucket. Flooding will begin 1-2 hours before high tide. Please continue to follow directions of local officials! pic.twitter.com/z51F3RmysD

The entire town of Scituate, Massachusetts is without power, according to officials. Scituate is located southeast of Boston along the coast.

Scituate officials: 100% of the town is without power.

The number of power outages across the region continues to rise with nearly 2.5 million customers experiencing an outage.

Water levels along the coast of New England are beginning to rise and will continue to rise over the next few hours as high tide approaches.

Storm surge at Nantucket, Mass. peaked at just over 4 feet above normal tides this evening. Winds are currently gusting to 90 mph there.

2,416,000 customers are without power at this time. pic.twitter.com/E9tkGfnxW6

A state of emergency has been declared in Maryland in response to the damaging nor'easter that has impacted the region.

Travel conditions may remain poor in Maryland through Saturday as crews work to clean up after the worst of the storm has passed.

.@GovLarryHogan declares a state of emergency beginning Friday, March 2nd in the wake of damaging winds resulting in power outages, downed trees, and dangerous travel conditions across the state due to Winter Storm Riley.https://t.co/kFBOIglDWP

Boston has recorded one of its highest wind gust so far today with winds reaching 61 mph. Stronger winds have been recorded south and east of the city with Nantucket clocking a wind speed of 89 mph.

Power outages across the Northeast have climbed to over 2 million and may continue to rise into Friday night as strong winds persist across the region. 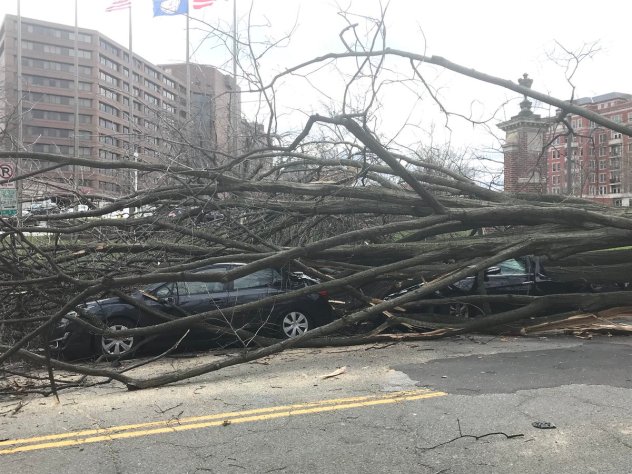 Virginia Gov. Ralph Northam has declared a state of emergency in response to the severe weather impacting the state. This will help Virginia mitigate any damage caused by the storm.

Amtrak has canceled all service across the Northeast Corridor until Saturday due to hazardous weather conditions.

Despite our best effort to restore service between BOS and WAS today, we have determined at this time it is not safe to do so. Hazardous conditions for our customers & crews have led us to cancel all Amtrak service on the Northeast Corridor until tomorrow. We sincerely apologize.

There are 160,485 customers without power in Massachusetts, according to the Massachusetts Emergency Management Agency. 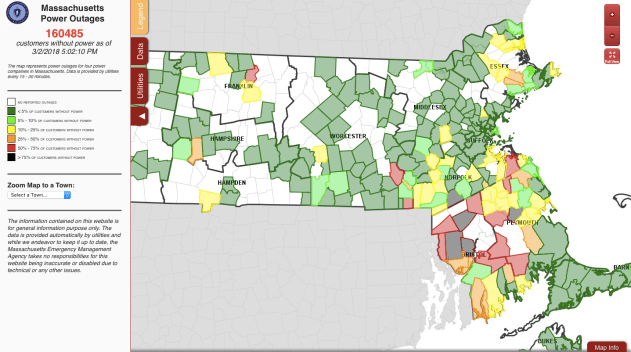 Powerful winds caused six barges to break loose from the new Tappan Zee Bridge project, according to the Palisades Interstate Parkway Police Department. The barges were floating loose along the Hudson River off of Irvington.

One barge, last seen near the Yonkers Sewer Treatment Plant, is now fully submerged. Two were found near Alpine, New Jersey. The rest remain unaccounted for.

One person was injured on East Street in Tewksbury, Massachusetts after a tree fell on a vehicle. The road has been closed and the person was transported to a local hospital with non-life-threatening injuries. 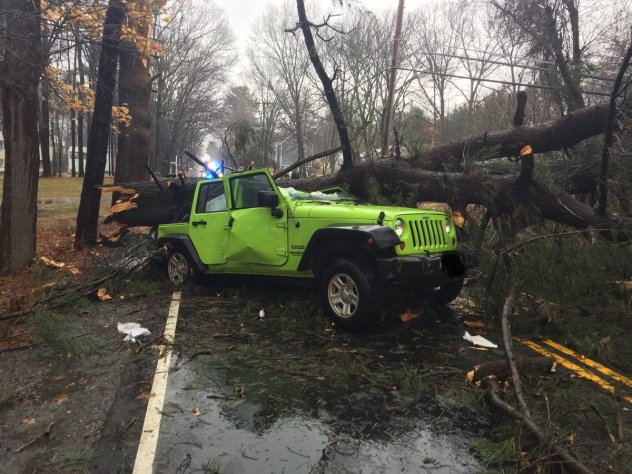 There have been reports of a school bus and multiple cars stuck just off the roadway in Bucks County, Pennsylvania.

A 6-year-old boy died after sustaining serious injuries when a tree, knocked over by strong winds, fell on his mobile home earlier today in Chester, Virginia.

Devastated mother of 6 year old Chester boy critically injured by this tree: “Doctors say we have to let him go.” pic.twitter.com/x9RM53PzkH

A flood warning is in effect for Rhode Island and Southeastern Massachusetts, where a total of 1 inch is expected to fall, according to Boston NWS. Coastal flooding will continue through the night and is expected to worsen later tonight.

That yellow dot is Lt Gillan of our Marine Unit. Just to give you an idea of the depth of this water - he’s over 6ft tall. pic.twitter.com/IV31fQqPh2

The Baltimore County Police Department reported the death of a 77-year-old woman who was struck by a falling tree branch.

Damaging winds have been threatening trees and power lines throughout the day across the Northeast, including at one home that was crushed by a tree in Kensington, Maryland.

Travel disruptions continue across the northeast. All arrival and departure flights at LaGuardia Airport have been suspended until further notice due to heavy winds.

One flight descending into Dulles International Airport at around 7:38 a.m. experienced "very bumpy" conditions on its descent. "Pretty much every one on the plane threw up. Pilots were on the verge of throwing up," according to one pilot's report.

The nor'easter continues to wreak havoc on travel. The FAA tower at Dulles International Airport was evacuated for a short time due to high winds, but officials have since returned to the tower. A ground stop was also instituted at Dulles.

Air Traffic Controlers have returned to the tower and air traffic has resumed. We encourage travelers to continue checking with their airline on flight status before heading to the airport. https://t.co/SUvuW6MsOG

In addition, Amtrak has temporarily suspended service to the entire Northeast Corridor.

A flood advisory is in effect for portions of Southern New England where excessive rain is leading to urban and poor-drainage flooding. Boston reached its third highest tide in history at 14.67 feet, according to Boston NWS.

A tractor trailer has overturned on the eastbound portion Claiborne Pell Newport Bridge in Jamestown, Rhode Island. Travel is restricted to one lane in each direction and closed to high-profile vehicles, according to the Rhode Island State Police.

From a friend - windy day on Newport Bridge, not good pic.twitter.com/JbEwgiRK66

There have been 372 reports of wind damage in the East today, according to NWS Spotter. 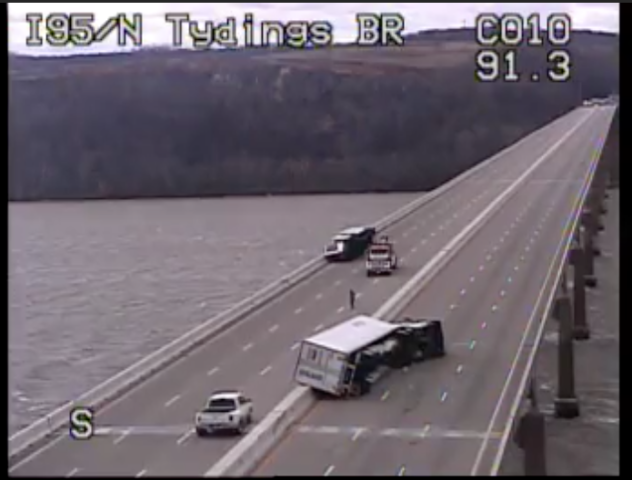 Tides are now 2.7 feet above normal in Boston and there are reports of flooding, according to AccuWeather Senior Meteorologist Alex Sosnowski.

Along the north side of New York City, tides are about 2.5 feet above normal.

There are blowout tides at Baltimore Inner Harbor where the tide is about 1 foot below average. Water is being pushed out of the harbor and to the eastern side of the Chesapeake Bay, according to Sosnowski.

Water building up on the runway made stopping the plane... interesting. #noreaster @accuweather @breakingweather pic.twitter.com/gLCXO06pyr

This is what it's like arriving at #Newark around 930 EST. Sort of bumpy. #noreaster @accuweather @breakingweather pic.twitter.com/coxIqT7UWX

Follow AccuWeather's live broadcast coverage of the nor'easter bringing numerous impacts to the Northeast. We'll have studio updates on the storm every 30 minutes via the Facebook Live post below.

The speed limit on Interstate 90 in Massachusetts has been reduced due to poor weather conditions.

Traffic conditions are also worsening on I-81 near Scranton, Pennsylvania.

This is Interstate 81 southbound in New Milford Twp. Tractor trailers stuck and partially blocking a lane of traffic. Wind is picking up and visibility is getting worse with every mile. @WNEP #pawx pic.twitter.com/tYN0Y5hxFX

Based on a 24-hour pressure change from 29.87 inches to 29.16 inches, the powerful storm slamming the Northeast has officially undergone bombogenesis, according to AccuWeather Senior Meteorologist Alex Sosnowski.

Strong winds from the bomb cyclone have downed a massive tree at the University of Maryland's campus in College Park.

There have been at least 70 reports of downed trees and power lines due to wind damage in Virginia and Maryland, with most occurring in the Washington, D.C., area, according to NWS spotters.

There were 64 reports of wind-damaged trees and power lines in Massachusetts Friday morning, mainly around Boston.

These winds mean business! We have tree damage on campus. This is how people can get seriously hurt. Stay safe Terps! @NWS_BaltWash (Via Erik Gates) pic.twitter.com/8TmTfpItbH 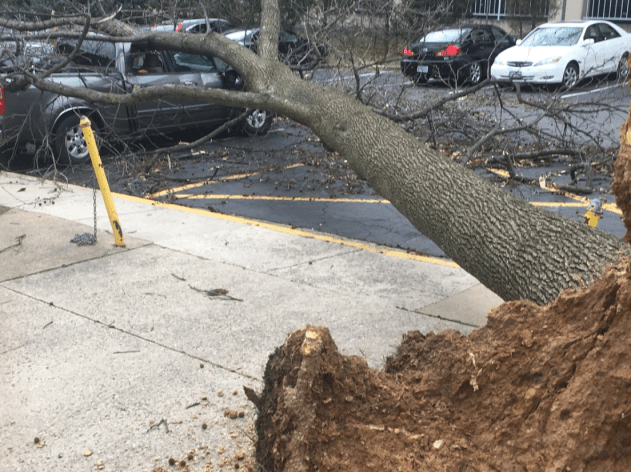 Strong winds knocked a tree into a truck parked at an apartment complex in Fairfax, Virginia, just southwest of Washington, D.C. (Twitter photo/@lorenkaho)

Government offices in D.C. have closed due to the severe weather. At least 435,000 customers are now without power as a result of the bomb cyclone.

03/02: Federal offices in the DC area are closed. Emergency and telework-ready employees must follow their agency’s policies. https://t.co/TiCGeSTFj9

Residents of Charlottesville, Virginia, are being impacted by power cuts, which have prompted Charlottesville City Schools to operate on a two-hour delay. Some schools in the area are also closed.

Please continue to be alert for for debris, trees & branches on roadways in #Cville. @DomEnergyVA reports ~1,900 w/o power in city.

Power outages continue to mount in Maryland, where more than 64,000 Maryland Utilities customers are now without power.

Power Outages as of 7AM. Updated information is here: https://t.co/4m8HB5GKCH pic.twitter.com/B2TFkkSTUC

Wintry conditions are causing travel disruptions in Pennsylvania, where some highways, including I-90, are experiencing lane closures.

Drivers in New York are also dealing with slick travel conditions. New York State Police warned on Twitter that although roads may appear to be clear, travelers should exercise caution as roads may be slippery.

Slow driving conditions on the roads this morning. This is video of 390 heading past the airport. Take your time this morning and exercise caution on the roads. @News_8 pic.twitter.com/qg6rBsR0AF

Rising floodwaters from Jamaica Bay are beginning to cover some streets in parts of Queens, New York.

Heavy snow continues to fall across western New York as more than 18 inches of snow are being reported in East Aurora, New York, about 20 miles southeast of Buffalo.

Record-breaking snowfall has been reported in Buffalo, with 8.4 inches of snow observed at the airport thus far. This tops the previous record for this date, which was 6.5 inches of snowfall in 1914. 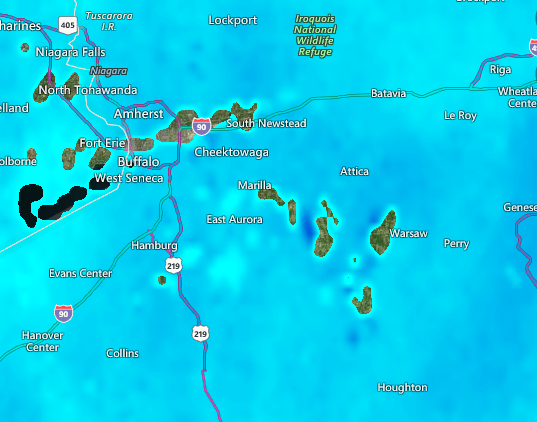 All MARC Train Service has been suspended in Maryland as high winds have caused trees to fall on tracks.

All federal offices in the Washington, D.C., metro area are also closed.