Large waves were seen along the coast of Carmel-by-the-Sea, California, on Jan. 5, as a storm system brought heavy rain to the region, triggering widespread flash flooding.

The recent bout of stormy weather in California over the last two weeks, driven by a persistent flow of moisture off the Pacific Ocean, is leaving its mark in the record books, and there is more ahead in the coming days and weeks, according to AccuWeather forecasters.

Rainiest period since the Civil War in San Francisco 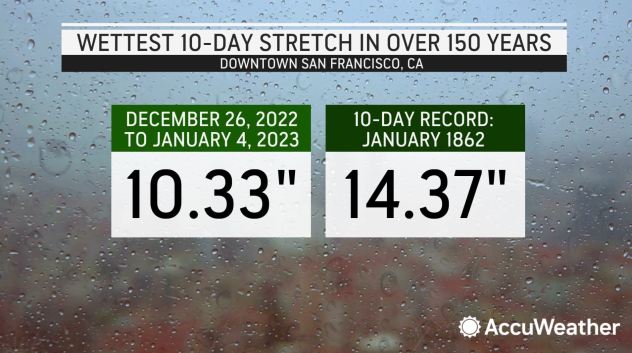 • Since the beginning of the state's water season, on Oct. 1, a total of 15.17 inches of rain has fallen in Downtown San Francisco. On average, about 9 inches of rain is expected between that day and Jan. 5. Coincidentally, more rain fell during the stretch from Oct. 1, 2021, to Jan. 5, 2022, (16.76 inches), but this season is more noteworthy for how much rain has fallen over a period of fewer than two weeks. 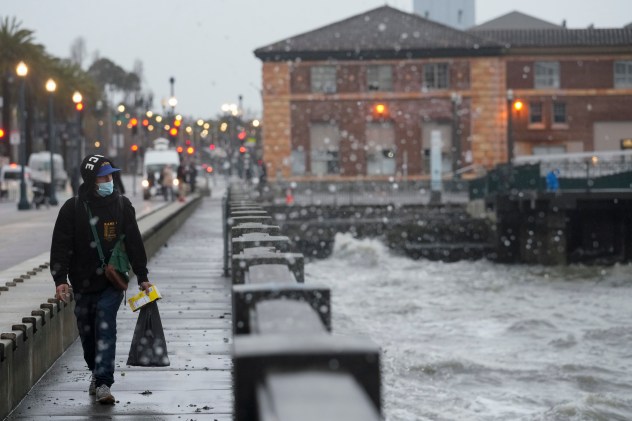 A person walks along The Embarcadero in San Francisco, Wednesday, Jan. 4, 2023. (AP Photo/Godofredo A. Vásquez)

Sierra snow totals nearing what is typical for an entire season

• The recent storms have been blasting the Sierra Nevada mountain range with an incredible amount of snow, with each event being measured in feet. For the entire range, the amount of water locked in the snowpack is above average for the season so far, and in some places, is approaching the average amount for an entire winter season. The San Francisco Chronicle reported that the current average snowpack across the range is at a 10-year high. 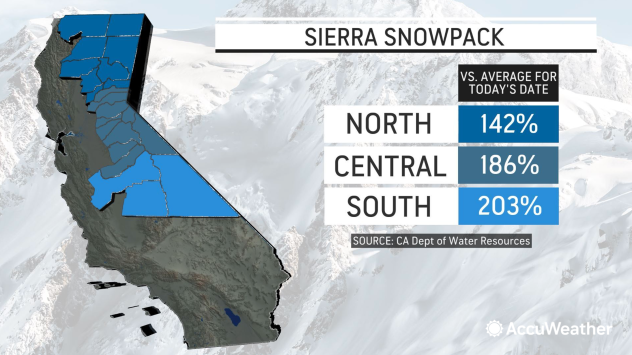 • According to the California Department of Water Resources, the amount of water locked in the snow ranges from 15 to 20 inches across the mountain range. That equivalency in the southern Sierra Nevada range is currently around 200% (twice) of what is normal for the season to date and is at 80 percent of what is typical for an entire season. The central and northern ranges are trailing the mountains to the south, but they are still running above average in the 140 to 185% range for the season so far, which is 50 to 75% of what is normal for an entire season.

What role do La Niña and El Niño play in California precipitation?

• When heavy rain and snow are discussed for California's wet season, inevitably the conversation goes to what the status of the El Niño-Southern Oscillation (ENSO) is, specifically, whether or not it is an El Niño or La Niña year. Currently, a La Niña is present, but it is weakening. During an El Niño pattern, a wetter winter season usually occurs in California.

• According to AccuWeather Lead Long-Range Forecaster Paul Pastelok, a weakening La Niña impacted the weather pattern over the Pacific, leading to the current train of storms. "A strong trail of storms across southern Asia moved across the Pacific from late December into early January and forced the subtropical jet steam farther south right into California," said Pastelok. The subtropical jet stream, which moisture-packed storms will track along, typically stays north of California during the winter months in a La Niña year, but as Pastelok points out, a weakening La Niña can force that jet stream farther south into the heart of the Golden State. 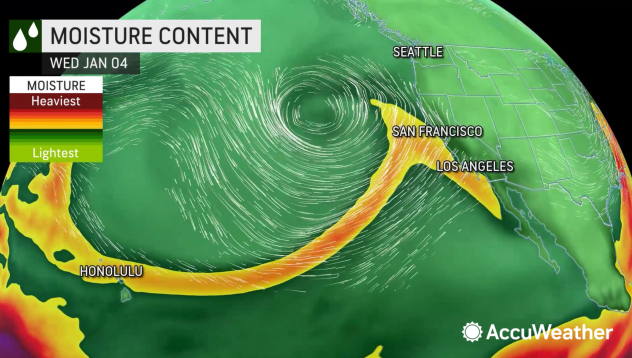 A look at the "moisture train" along the subtropical jet stream, as of Wednesday, Jan. 4, when it was aimed directly at California.

• Despite the storminess coming during what is technically a La Niña year, California residents are making comparisons with the recent weather to what typically occurs in an El Niño year. "This has been very, very bad," long-time Santa Cruz County resident Mark Zevamovf told ABC 7 in San Francisco about the heavy rain and damage along the coast there. "1982 was worse," he added. 1982-83 was an El Niño year, underlining the variable nature of impacts to Central and Northern California that can occur despite the current status of ENSO.

• While a brisk start to the wet season can be good news for California's reservoirs in the face of ongoing drought conditions, it doesn't always guarantee a beneficial wet season overall. Following the aforementioned fast start to the last water season, minimal amounts of precipitation fell over the rest of January and February in 2022. It appears that will not be the case going forward early this year. 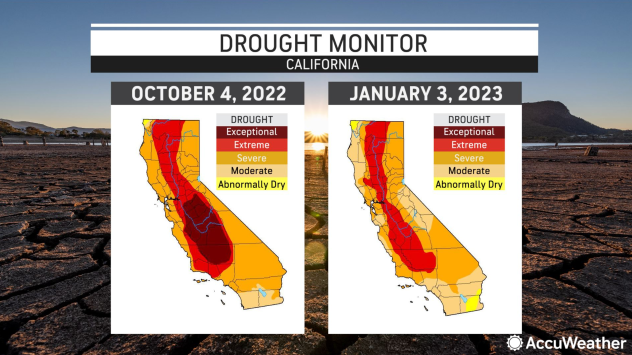 • "There won't be much of a break in the series of storms for most of California," said AccuWeather Senior Meteorologist Heather Zehr. "Rain will return over the upcoming weekend, and yet another powerful storm will quickly move in for early next week, bringing copious amounts of moisture with it." Zehr expects 2-4 more inches of rain to fall in the Bay Area, with greater amounts over the higher terrain north of the cities. In the mountains, feet of additional snow will fall.

• The constant firehose of moisture is helping relieve drought concerns in California, but Brad Pugh, a meteorologist and author for the U.S. Drought Monitor said it will take more than these two storms to erase the long-term drought. “It’s beginning to make a difference,” Pugh told AccuWeather in an interview. “But given the long-term nature of the drought, we’re gonna have to see a continuation of this wet pattern through February and March to completely recover.”

• Recent storm systems have brought a slew of impacts to the Golden State, and additional storms into the new week and next weekend will mean more of the same. "Life-threatening flooding, mud and landslides, power outages and dam failures are all possible," added Zehr.

Whale watchers witness rare birth off Calif. coast before the storm
Jeremy Renner thanks his fans for their sympathies in his first social media post after snow plowing accident
Dangers to life, property remain high in California as storm onslaught continues