Warmth will continue to build over much of the eastern United States into next week, ahead of what could be a major snowstorm for parts of the Central states.

"No arctic air will be present across the lower 48 states until late January," according to AccuWeather Senior Long-Range Meteorologist Jack Boston. 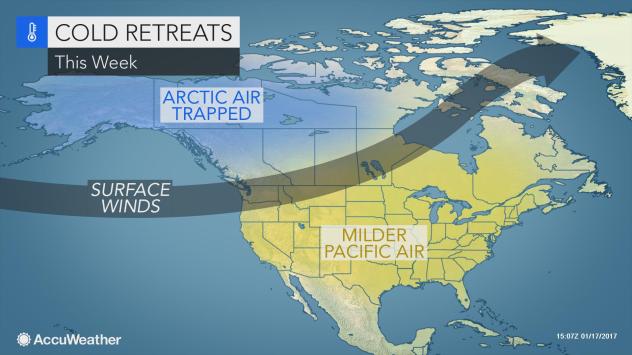 Record warmth may unfold across eastern half of nation

Once chilly air and snow erode in New England, highs in the 30s, 40s and 50s F will be common in the North Central and Northeastern states and in the 60s and 70s F in the South.

These conditions will lead to an extended thaw over the Midwest and the mid-Atlantic.

Warmth will continue in the eastern third of the nation into next week. Many areas are likely to be equally as warm as this week and could be even warmer during the middle and latter part of next week.

"While low clouds, patchy rain and drizzle may hold daytime temperatures to within 10 degrees of average in some areas, there is the potential for temperatures to climb even higher next week, when compared to this week," according to AccuWeather Senior Meteorologist Brett Anderson. 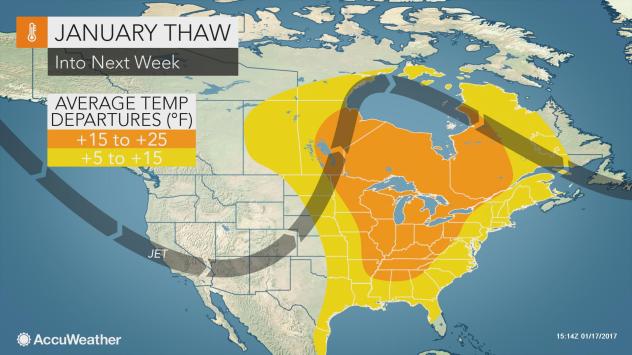 Where the sun is out, even for a brief time, from the Midwest and mid-Atlantic on south, it will feel like springtime. Record highs could be challenged in some areas, especially in the Southern states.

An exception will be New England for a time. Air from eastern Canada will push into New England with near-average temperatures this weekend into early next week.

However, if a surge of warmth develops with drenching rain by the middle of next week, there will be the risk of ice jams along some of the rivers as the pattern evolves in part of northern New England.

As the thaw progresses, people should use extra caution when venturing onto frozen ponds and lakes from the Midwest to the Northeast.

Temperature extremes to contribute to a major storm

While the East experiences unusual warmth with episodes of rain, colder-than-average air will settle into the western U.S. next week. The temperature extremes from west to east will set the stage for a major storm over the Central states.

"Depending on the path of the storm, a swath of heavy snow may develop from the southern Rockies to the northern Plains," Anderson said.

The storm could impact the swath from Flagstaff, Arizona, to Denver and perhaps Omaha, Nebraska, and Minneapolis. 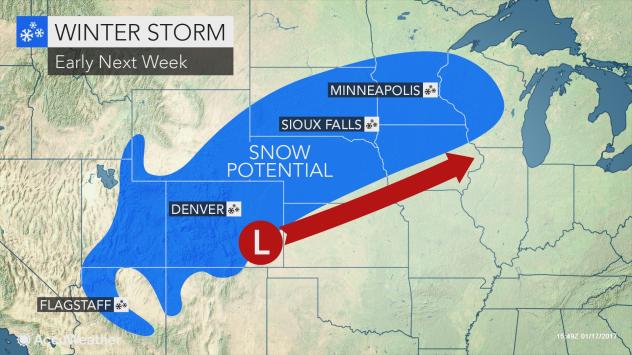 People living in or traveling through these areas may want to monitor the forecast as there could be weather-related delays from Monday, Jan. 23, to Wednesday, Jan. 25.

The central U.S. storm could signal another pattern change to end the month.

As the storm travels toward the Great Lakes then Ontario, Canada colder, perhaps arctic air will be funneled southward and eastward, according to Boston.

"January may end with near to below-average temperatures and a return of snowy conditions around the Great Lakes and part of the Northeast," Boston said.