Preparing for the costliest weather disaster in the US: How to stay safe before, during and after a flood

Floods may not inspire as much fascination and terror as hurricanes and tornadoes, but they can be just as devastating and cause destruction on a more massive scale. Knowing what to do before, during and after a flood can save your life and help minimize the damages to property.

“Floods are the most common and costly disasters we see in the U.S.,” said Rafael Lemaitre, director of public affairs for the Federal Emergency Management Agency (FEMA).

More deaths occur from flooding than any other hazard except for heat-related fatalities, according to the National Weather Service (NWS). The national 30-year average for flood deaths is 127, compared to a 30-year average of 73 deaths for lightning, 68 for tornadoes and 16 for hurricanes.

“Anybody who lives near any size water really needs to be cognizant,” said Katie Collins Garrett, a meteorologist and communications specialist for the National Oceanic and Atmospheric Administration (NOAA).

Staying out of harm's way

According to Garrett, nearly all flood fatalities can be prevented by following one simple rule.

“The number-one thing is turn around and don’t drown,” she said. “Absolutely don’t go into floodwaters." 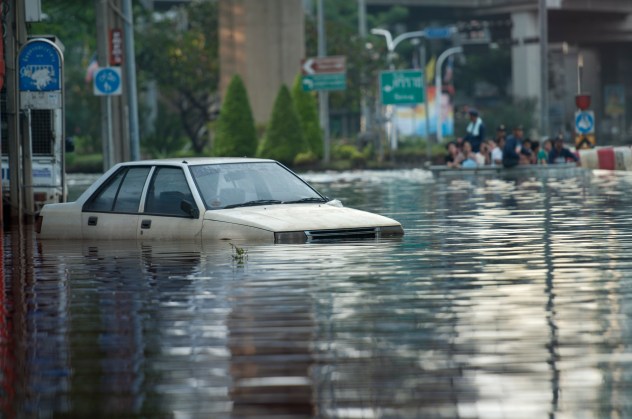 A major cause of flood fatalities, Garrett said, is people driving into floodwaters. This is a particularly high risk during flash floods, which occur when excessive water fills normally dry creeks or river beds along with currently flowing creeks and rivers.

Flash floods, according to the National Severe Storms Laboratory (NSSL), are the most dangerous kind of floods, because they “combine the destructive power of a flood with incredible speed and unpredictability.”

During a flood emergency, Lemaitre said, it is important for people to heed the instructions from local officials, such as staying off the road. To stay up-to-date on new developments, people can sign up to receive text alerts from state and local governments and follow government officials on social media.

"They are providing information that could potentially save your life,” Lemaitre said.

A particularly effective way to stay updated during a flood emergency, Lemaitre said, is downloading the FEMA App, which is available for Apple, Android and Blackberry mobile devices. Users of the app would be able to receive weather alerts from the NWS for different locations, tips on what to do during floods or other natural disasters and information on open shelters.

Additional ways that people can prepare for floods, Lemaitre said, include stocking food, water and supplies to last three days and practicing disaster planning as a family.

"The better prepared people are for disaster, the faster they can bounce back,” he added.

Where to go for help during a flood

In the event of an evacuation, various churches, community and nonprofit organizations provide shelter for displaced individuals and families. The American Red Cross, according to its website, helps disaster victims by providing safe shelter, hot meals and essential relief supplies. The Red Cross also supports emergency workers, links family members outside the disaster area and provides blood and blood products to disaster victims.

According to Safewise, FEMA and the FCC both recommend keeping a corded phone in the home, since an old-fashioned phone with a cord will still work even during a power outage. Safewise also advises having a NOAA weather radio on hand. These radios usually contain a battery as well as a hand crank. They often have an outlet for charging a cell phone and some even have flashlights.

NOAA radios are useful for getting accurate weather information during storms and power outages. Also, Safewise advises to enter “In Case of Emergency” cell phone contacts that can be reached by emergency personnel.

People are increasingly relying on social media to communicate with friends and family during emergency situations.

In 2014, Facebook launched Safety Check, a feature activated by the company during natural or man-made disasters to determine quickly whether people in the affected geographical area are safe.

If it looks like you may be near a major crisis, Facebook will send a notification asking if you're safe. If you're OK, click or tap the "I'm Safe" button to share the news with your friends and loved ones.

While drowning is a major risk of flooding, some of the most potent dangers stem from contaminants in floodwaters.

According to the Center for Disease Control (CDC), floodwaters and standing waters pose various risks, including infectious diseases, chemical hazards and injuries connected with downed power lines. Floodwater often contains infectious organisms, including intestinal bacteria such as E. coli, Salmonella and Shigella, according to a report by the Occupational Safety and Health Administration (OSHA).

“A lot of times people don’t realize how gross floodwaters are,” Garrett said.

WATCH: What to do when driving in floodwaters
Prepare for severe weather with a weather radio
VIDEO: What to do immediately after a tornado hits

In the aftermath of a flood, she added, homeowners should consider hiring environmental remediation experts to do a deep clean and check their homes for structural issues. In the event of an evacuation, people should turn off the power and unplug any electronic devices to prevent electrocution.

Protecting your property through flood insurance

In addition to preparation and safety measures, homeowners need to consider how to deal with the financial damage wrought by flooding. Since flood damage is not covered under homeowner insurance policies, purchasing flood insurance is necessary to safeguard assets in the event of a flood.

“Flood insurance is the only way you can protect yourself,” Lemaitre said.

Many people don’t purchase flood insurance because they believe they are not at risk, he added. However, according to FEMA, more than 20 percent of flood insurance claims come from people outside of mapped high-risk flood areas. The average annual cost for flood insurance is just $400 to $600 for people living in low-risk areas, Lemaitre said. From 2011 to 2015, the average flood claim amounted to more than $46,000.

The National Flood Insurance Program (NFIP), which is administered by FEMA, works closely with more than 80 private insurance companies to offer flood insurance to homeowners, renters and business owners.

In order to qualify for flood insurance, the home or business must be in a community that has joined the NFIP and agreed to enforce sound floodplain management standards. Information about the NFIP can be found at www.floodsmart.gov.