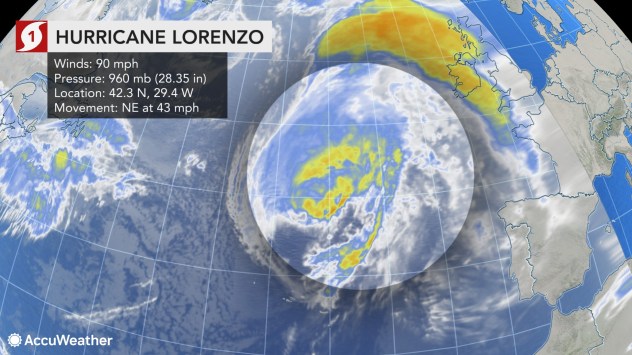 After Hurricane Lorenzo lashed the Azores, residents of the United Kingdom and Ireland are the next to face significant impacts from the storm.

Lorenzo became a Category 5 major hurricane Saturday night, prior to weakening some on Sunday and Monday. In doing so, Lorenzo became the strongest hurricane to be located that far north and east in the Atlantic.

Colorado State University Meteorologist Philip Klotzbach said that Lorenzo is the largest hurricane this far east in the Atlantic on record. Records for Atlantic hurricane size go back to 1988, he said on Twitter. 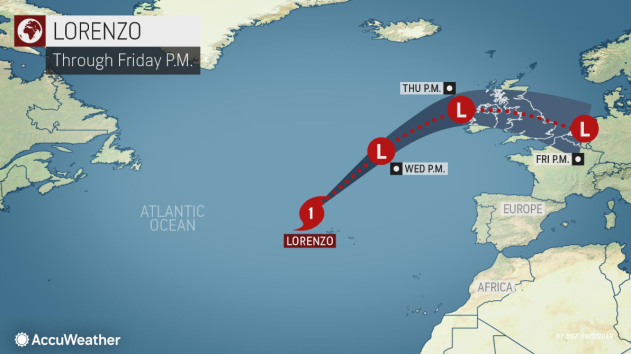 As of early Wednesday morning, Lorenzo was a Category 1 storm, located about 220 miles north-northeast of the Azores.

After departing the Azores, Lorenzo will approach western Europe, and consensus is growing that a direct hit will occur in the British Isles.

The key factors that will determine Lorenzo's track are a large, non-tropical storm system located near Greenland and an area of high pressure centered over Spain.

The area of high pressure will act as a shield, preventing Lorenzo from reaching the Iberian Peninsula and forcing the storm northward toward the British Isles.

At the same time, the storm near Greenland will attempt to pull Lorenzo north and westward.

As Lorenzo tracks to the west of the British Isles, it will attempt to find a weakness in the high pressure shielding the region. This would allow it to veer eastward and result in a direct hit on the islands.

In this scenario, Lorenzo could track directly into Ireland, Northern Ireland or Scotland as a powerful post-tropical storm with hurricane-force wind gusts. 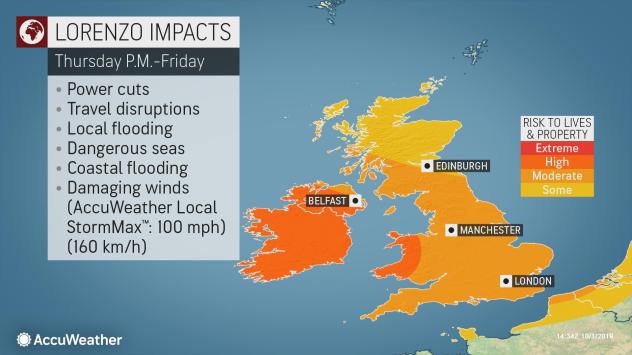 Powerful winds may then result in widespread tree damage, power outages, significant travel disruptions and some damage to homes and businesses from Thursday night into Friday.

Hardest-hit locations are expected to be across Ireland, Northern Ireland and coastal locations of western Wales.

Rainfall from Lorenzo, on top of recent heavy rain, will result in a high risk for flooding across Ireland, Northern Ireland, Wales and northwestern England. "Local rainfall in excess of 50 mm (2 inches) is possible in these areas," added Roys.

Leaves that are still on trees may potentially increase the risk for tree damage and power outages and also elevate the risk for flooding due to clogged drains as the strong winds cause a significant leaf fall.

"In addition to flooding from Lorenzo's rainfall, significant coastal flooding will be a concern, especially at times of high tide," said Roys.

Dangerous seas will also threaten any boating and shipping interests across the North Atlantic to the west of the British Isles into Friday with increasingly rough seas expected in the Irish Sea, British Channel and North Sea.

Impacts ranging from coastal flooding to travel delays and locally strong winds are also expected across far northern France, Belgium and the Netherlands as a weakening Lorenzo brings downpours and gusty winds Friday into Friday night.

Although it appears unlikely, there is a small chance that Lorenzo will track farther to the north and west, sparing the British Isles and the remainder of northern Europe from any significant impacts.

A band of rain would cross the region from late Thursday into Friday in this scenario with no widespread flooding or damaging winds expected.

During the time that the storm avoided land, it still remained a threat, particularly to shipping interests. Late last week, a tug boat with 14 people aboard went missing about 1,200 nautical miles off the island of Martinique, according to Radio Free Europe.

It was later confirmed by the French shipping company, Bourbon, that the tug boat had sunk after taking on water in the rear of the vessel. At the time, it was about 60 nautical miles from the eye of the then-Category 4 Lorenzo.

At least two crew members, both Ukrainian, were rescued, but the bodies of three victims have been recovered in the days since. Most of the crew members were from the Ukraine.

On Monday, Bourbon confirmed that the body of one of the missing was found, and the sailor's family was being notified.

"Bourbon stands by the seafarers' families and is fully mobilized to support them in this terrible time," the company said in a statement.

The search for the remaining victims, which initially began Sept. 26, remains underway.

According to Radio Free Europe, the French Navy, at least five nearby commercial vessels and the U.S. National Hurricane Center have assisted in the search.