Post-Christmas storm to strike the central US with snow, rain and thunderstorms

AAA has released its top 10 year-end travel destinations list for 2018. The list shows temperatures play a huge role in where people go.

People with travel plans after Christmas should watch the weather closely over the central United States as the potential for a major storm exists with heavy snow across the north and flooding rain and severe thunderstorms across the south.

A storm poised to bring rain and snow to California and other parts of the Southwest through Christmas Day will reorganize east of the Rockies at midweek.

The storm may dip far enough to the south in the Western states to tap into subtropical moisture.

As this storm treks northeastward, drenching showers, thunderstorms and the risk of severe weather will ramp up over the South Central states, while an area of heavy snow and wind expands from the eastern slopes of the central Rockies. 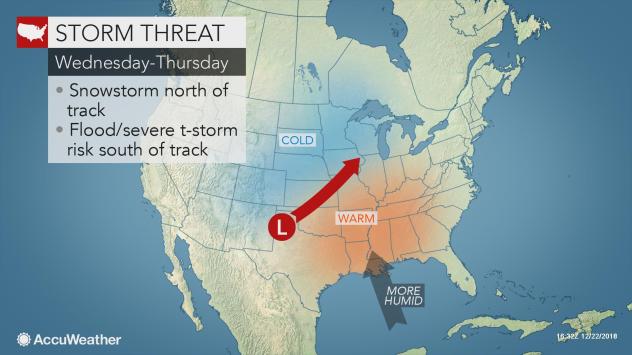 Heavy snow will slice across parts of the central and northern Plains and the Upper Midwest during the second half of the week.

Cities and major airport hubs that may receive accumulating snow from the storm include Denver and Minneapolis.

"Increasing winds with the storm are likely to cause extensive blowing and drifting snow and perhaps blizzard conditions on Wednesday and Thursday," according to AccuWeather Meteorologist Isaac Longley. 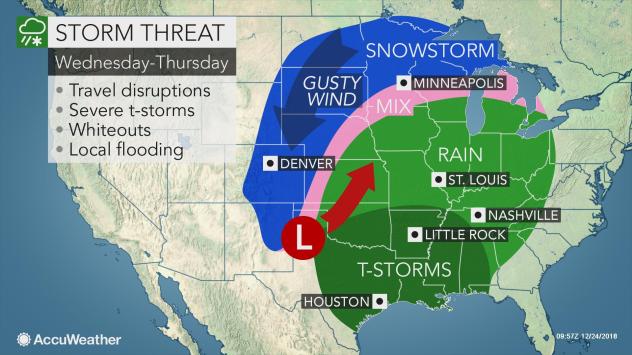 A swath of wintry mix, including ice, is likely to develop in between the plain rain and snow areas of the Central states. As with the case of the heaviest snow, the area of wintry mix will depend on the storm's track.

Severe weather cannot be ruled out with this storm

The first thunderstorms may erupt over western and central Texas to western Oklahoma on Wednesday.

A severe weather risk may then progress eastward across the southern Plains to the lower and perhaps middle Mississippi Valley from Wednesday night to Thursday night.

While it is too early to say for sure if the storm will trigger violent, severe thunderstorms and tornadoes, storms of this magnitude and characteristic often do just that.

During the wintertime, sunshine is often not needed to warm the air to spawn severe thunderstorms. The circulation around the storm is sometimes enough to pull warm air up from the south.

Widespread heavy rain may renew flooding in some areas

Accompanying the thunderstorms, as well as areas farther north, will be drenching rain and localized flooding from parts of the central Plains from Wednesday to Thursday and the Midwest from Thursday to Friday.

A general 1-2 inches of rain is likely to fall. However, local amounts to 6 inches are possible near and south of the Interstate-40 corridor from the lower Mississippi Valley to the southern Appalachians and Piedmont areas of the Southeast and the Gulf coast.

Enough rain may fall with this storm to aggravate river flooding or spur on new incidents of flash and urban flooding across the South.

Photos: Thousands travel to watch spectacular winter solstice sunrise at Stonehenge How to stay safe while shoveling snow Snow to spread through Great Lakes, northeastern US prior to Christmas

Chicago, Milwaukee, Detroit, St. Louis, and Kansas City, Missouri, are among the major cities and airport hubs to receive rain from the storm later this week. This means that travel along the I-80 corridor from much of Iowa on east should be wet and not wintry.

However, an Alberta clipper storm is expected to whiten the ground from parts of the Midwest and Northeast just prior to Christmas, which may lift the spirits of snow lovers around the holidays.

Like the last couple of big storms, this new major storm is likely to bring all or mostly rain to the East.

Along the Atlantic Seaboard, from Atlanta to Philadelphia, New York City and Boston, the worst weather-related travel delays are likely on Friday. Enough rain is likely to fall to cause wet highways and create a low cloud ceiling at the airports. There may be enough wind to cause trouble as well. Urban flooding is possible.

There may be a few pockets of ice at the onset as the storm reaches areas near and east of the Appalachians to end the week.

Download the free AccuWeather app to check the latest forecast for your area.