Orionid meteors will streak across the night sky as the shower is set to peak late this week.

The Orionid meteor shower is a moderate shower that produces about 25 meteors per hour on the peak night.

"The Orionids are one of the top five meteor showers of the year and will bring the best chance to see a shooting star since the Perseids meteor shower in August," AccuWeather Meteorologist Brian Lada said.

The greatest number of meteors were expected on the night of Oct. 20 into the early morning of Oct. 21. However, it was difficult to view for many due to clouds and a bright, waning gibbous moon, which limited visibility.

The Orionid meteors are usually at their best in the early hours before dawn.

For viewing Friday night into Saturday morning, a large area of the country will be able to view the meteors thanks to a clear sky and good visibility.

Viewing will still be difficult across the Northeast and Pacific Northwest, where clouds and showers will obscure the sky. 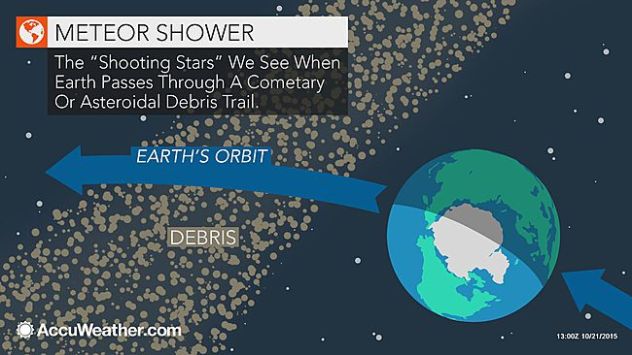 "The best viewing conditions this year will be across the Plains and southwestern U.S.," Lada said.

The Orionid meteors, also known as shooting stars, are debris of ice and dust left behind by Comet Halley. The debris particles discarded by the comet plummet into the Earth’s atmosphere. Sometimes the meteors leave a trail of ionized gas, which gives the appearance of a glowing streak.

"Occasionally, the Orionids produce fireballs, meteors that shine extremely bright for a few quick seconds before fading away," Lada said.

The key to seeing a meteor shower is finding an unobstructed view where you are able to see as much sky as possible. Dark areas in the countryside and parks away from city lights are best.

If skygazers are unable to see the Orionids, a more notable meteor shower, the Geminids, will occur in December of 2016. It is usually the best meteor shower of the year. Stargazers may see as many as 120 meteors per hour at its peak, which can also bring multicolored meteors.