October to usher in plunging temperatures, frosty episodes in northeastern US

The calendar flipped to fall this past week, but Mother Nature didn't get the memo. Warm afternoon sunshine bathed the Northeast many days during the first week of autumn, making it feel more like a never-ending summer.

However, long-range meteorologists say a significant change in the weather pattern is coming for the northeastern United States beginning during the first week of October.

While it's still too early to abandon shorts and short sleeves, long sleeves, jackets and sweaters hanging around in closets will soon be put to good use.

With early morning temperatures in the 60s and then skyrocketing to 80 in the afternoon, New Yorkers will have to adjust for two seasons on one autumn day.

While the region has experienced some bursts of cool air typical of September in recent weeks, temperatures have still averaged from 2 to 6 degrees above normal this month as there have been some significant and persistent surges of warmth.

Another surge of warmth and record-challenging high temperatures will affect much of the region on Saturday as locally heavy and gusty thunderstorms sweep through.

The upcoming pattern will still bring some temperature flip-flops, including some warm days, typical of the early autumn.

"However, much of the region is forecast to experience the lowest temperatures of the season so far with the likelihood of widespread frost over the interior during the first weekend of October," according to Paul Pastelok, AccuWeather's top long-range forecaster. 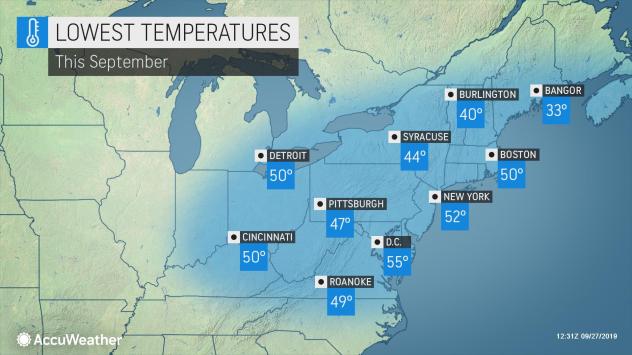 This graphic shows how low temperatures have been thus far during September. The upcoming pattern will bring new lows for the season so far by next weekend.

Thus far, frosts and freezes have been limited to the coldest spots of upstate New York and northern New England.

This far in advance, it is impossible to pinpoint exactly how extensive the frost next weekend may be. 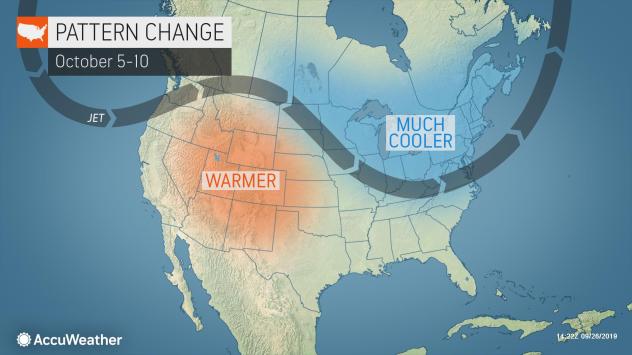 However, frost is likely over the central Appalachians and much of central and northern New England next weekend. For many of these areas, the growing season may come to an end with the arrival of the chilly air.

The freezing air may also go a long way in knocking down troublesome allergens for millions of people. It may also kill some of the bug population, including some pesky and dangerous mosquitoes. 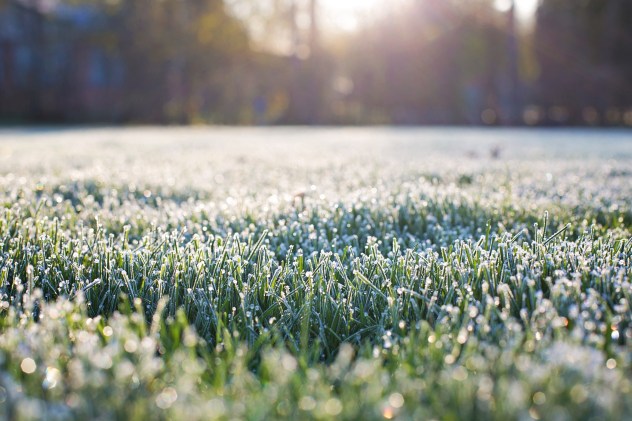 There is a chance of spotty frost over the suburbs of the major I-95 cities as well as over sandy soil coastal areas that include Long Island, New York, southern New Jersey and southeastern Virginia.

In an ideal setup for the lowest temperatures possible, the air mass should originate from northern Canada, and a clear sky and light winds will need to be present. The existing dry landscape should behave more like a desert and contribute toward a wide range in temperatures from day to night.

Given the perfect conditions to allow temperatures to plummet at night, lows could be in the teens in the coldest spots of northern New York state and New England, the upper 20s over the valleys of the central Appalachians, the middle 30s around some of the nearest suburbs of the major cities to the lower 40s in the coastal urban areas next weekend.

AccuWeather’s 2019 US fall foliage forecast Record-challenging heat to continue sweltering Americans across the South into early October ‘Historic’ storm to unleash feet of snow, life-threatening conditions in northwestern US

An area of high pressure from northern Canada is forecast to settle over the northern and central Plains first and the Midwest during the second half of the week.

During the first weekend of October, this air will then settle over the Northeast states. Some cooler and less humid air is also likely to reach into the interior South and the Carolina coast next weekend as well.

"Prior to the widespread cooldown next weekend, a sneaky push of chilly air will set up across upstate New York state and New England for the last weekend of September," Pastelok said.

"On Sunday, highs may range from the 50s over northern New England to near 80 in parts of the lower mid-Atlantic and the Ohio Valley," he added.

October is often a month of substantial temperature fluctuation.

Normal temperatures trend downward by 10-20 degrees from the beginning of the month to the end of the month.

Variations in the weather pattern that often occur in October on top of this cooldown can lead to big temperature extremes from one week to the next, perhaps ranging as much as 30 to 50 degrees.

This October could fit that mold, but temperatures by the end of the month may end up being below average and noticeably colder compared to the seemingly endless summer happening in September.

With the ongoing dryness likely to continue, this October should bring substantial color for leaf peepers in the region, barring any big wind events that would knock leaves off trees.

In the meantime, it might be a good idea to locate that ice scraper if you park outside overnight.

Download the free AccuWeather app to stay aware of the latest forecast and temperature trends for your area. Keep checking back for updates on AccuWeather.com and stay tuned to the AccuWeather Network on DirecTV, Frontier and Verizon Fios.