Cleanup is underway along a 30-mile path of destruction from an EF3 tornado that hit Jefferson City and the surrounding areas overnight on May 23.

A clearer picture emerged Friday of the size and scope of the powerful tornadoes that tore across Missouri on Wednesday night, leaving trails of destruction in their paths. The state’s capital, Jefferson City, was among the hardest-hit places, struck overnight by a tornado with a peak wind speed of 160 mph that has been given preliminary rating of EF3.

The monstrous nighttime tornado that struck Jefferson City, a city with a population of about 42,000, was almost a mile wide and was on the ground for nearly 20 miles, toppling homes, ripping roofs off homes and business below. At least 20 citizens were transported to local hospitals, according to Jefferson City Police, but no fatalities were reported.

AccuWeather News Reporter Jonathan Petramala was on the ground in Jefferson City Thursday after the twister roared through the city surveying the damage and speaking with survivors. Aerial photos showed large portions of the city in ruins with debris strewn in all directions.

While many residents had enough time to brace for the threat, some residents were not prepared for the tornado, including 86-year-old Bob Burnham, a Jefferson City resident.

“I really didn’t hear anything because I was asleep. The only thing I heard was that window breaking, and then I woke up,” Burnham told Petramala, gesturing over to the side of his bedroom window, which is now shattered. The garage of his home also collapsed; however, Burnham survived the disaster without even a scratch.

Many historic structures in the capital city are now in tatters. “It’s pretty devastating to see it in shambles,” an onlooker said to Petramala. Damages from the devastating tornado stretch over about 30 miles, leaving a long road to recovery for many survivors.

As residents in Jefferson City cleaned up tornado damage on Thursday, those in southwestern Missouri faced the same daunting task. The Golden City tornado was rated EF3 with maximum winds near 140 mph.

Three people were killed in Golden City, Missouri, after a tornado moved across the region Wednesday evening. An elderly husband and wife were identified as two of the victims. Kenneth "Gene" Harris, 86, and his 83-year-old wife, Opal Harris, perished in the storm. Their bodies were found about 200 yards from their farmstead home outside Golden City Wednesday night, officials said.

Local 41 Action News reporter Sarah Blake traveled to the Harris farmstead, where the damage was extensive. The Harrises were fourth-generation cattle ranchers. According to the family, Gene never missed a day of chores despite his advanced age. He loved golf, and he and Opal were devoted to family.

The third fatality was Betty Berg, 56. She and her husband, Mark Berg, also 56, lived in a mobile home just west of Golden City, which was lifted up by the tornado and landed in pieces across Highway 126. Her husband was seriously injured and reportedly remained hospitalized in critical condition as of Friday.

Their eight children and nine grandchildren are mourning the loss of Betty while trying to comfort Mark, who is in the hospital recovering, local news station KCTV News reported.

Betty's friend Rose Burke remembered Betty as kind-hearted woman. “Betty was the first person I met when I moved to Missouri,” Burke told KCTV. “She just took me in under her wings. She was like my best friend."

“Betty was an amazing person,” she added. “She watched my kids grow. She was called ‘Auntie Betty.’”

Burke hopes to find memorabilia for Betty's family, as each photo found is a chance to remember her.

“Please keep her kids and Mark in your prayers,” she implored. “Please. They need it a lot.”

Family and friends are gathering photos to hold onto memories of Betty Berg who did not survive a tornado that touched down near Golden City. Her husband Mark Berg is recovering in a hospital. “She was a wonderful person. Keep her kids and Mark in your prayers.” @KCTV5 10PM pic.twitter.com/wdjd7I7T7t

The damage from tornadoes spread further through the central U.S. A tornadic thunderstorm tracked from Ottawa County, Oklahoma, into Bexter Springs and Galena, Kansas, and then into Carl Junction, Oronogo and Golden City, Missouri.

Since Monday, there have been nearly 130 tornado reports across the Central states, and the threat will continue through Friday. At least 45 were reported on Wednesday. Some of these reports may be duplicates of the same tornado, meaning the final tally of tornadoes could eventually change.

Cleanup efforts continue in the impacted areas into Friday throughout the state. State and local officials continue to survey the damage.

Carrie Tergin, mayor of Jefferson City, joined the AccuWeather Network to speak with AccuWeather Broadcast Meteorologists Brittany Boyer and Geoff Cornish about the damage and aftermath from the EF3 tornado that struck late Wednesday night.

The city’s police and fire department went into action after the tornado moved in. Other agencies, the state, the county and surrounding cities came together to assist by sending resources and officers to the scene.

“We’re very, very fortunate, with the amount of significant damage, that we did not have a lot of injuries and thankfully, there have been no fatalities reported,” Tergin said.

While the city was still assessing the total number of buildings destroyed, Tergin described the damages as “expansive from one end of town to the other.” It started on the south end of Jefferson City and moved through the central core and out.

“It really left a pretty widespread path,” Tergin said. “It hit things from businesses to our brand new Special Olympics Training for Life facility. It hit a car dealership, and it literally had cars on top of each other.”

Power lines and trees were down everywhere. A lot of neighborhoods were hit, as well as a very historic area, Capital Avenue, suffered significant damage. 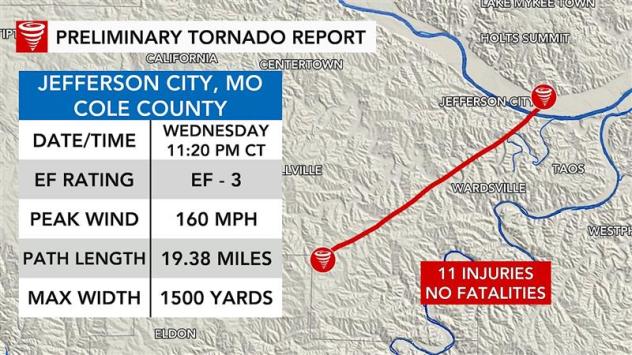 Missouri Gov. Mike Parson confirmed damage to state buildings and that power was out in some areas. Parson traveled to areas devastated by the storm to survey the damage on Thursday.

"Across the state, Missouri’s first responders once again responded quickly and with strong coordination as much of the state dealt with extremely dangerous conditions that left people injured, trapped in homes, and tragically led to the death of three people," Parson said in a Thursday morning press conference.

The Missouri Emergency Management Agency helps local agencies and other organizations with the cleanup efforts.

In addition to tornadoes, other forms of severe weather rolled through the central U.S. Wednesday night, including flash flooding, destructive hail larger than golf balls and wind gusts over 70 mph. Severe weather reports have been recorded through a large portion of the U.S. from Tuesday to Thursday. 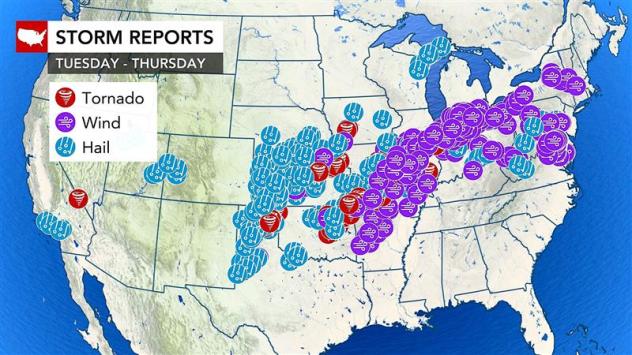 The three fatalities in Missouri bring the death toll of the severe weather outbreak up to nine for the week.

Two people were killed in a traffic accident near Springfield, Missouri, on Tuesday, according to The Associated Press. Officials say the accident was weather related. One fatality was reported in Perkins, Oklahoma, when a motorist drowned on Tuesday after driving around a high water warning barricade and into a flooded roadway.

Two bodies were found in a submerged vehicle near the Mississippi River in Missouri on Friday.

A tornado-related death was reported in Adair, Iowa, after severe storms ripped through the area early Wednesday. Emergency responders recovered the body of 74-year-old Linda Brownlee, while 78-year-old Harold Brownlee was flown to a hospital to be treated for injuries.

Some parts of the southern Plains have been hit with more than a month’s worth of rain since last weekend. Deadly storms that ripped across Oklahoma and neighboring states earlier last week sparked dozens of reported tornadoes and on Wednesday resulted in devastating floods throughout parts of Oklahoma. More thunderstorms could cause floodwaters to expand even further, continuing to inundate roads and communities.