Monster tornado rips through city in China, killing 6 and injuring 190

A tornado devastated Kaiyuan, China, which is northeast of Beijing on July 3, killing at least 6 and injuring nearly 200 people.

At least six people were killed and 190 others were injured after a ferocious tornado tore through the city of Kaiyuan, north-east China's Liaoning province on Wednesday, officials said. 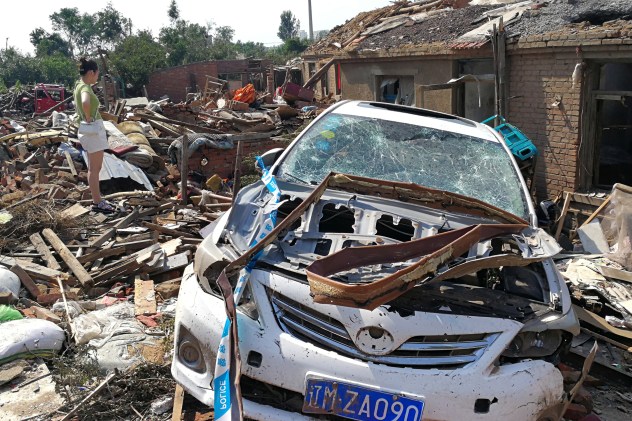 A woman stands on the rubble next to houses and a car damaged by a tornado in Kaiyuan city, in northeastern Chinese province of Liaoning, China, on July 4, 2019. (REUTERS/Stringer)

The twister tore through the city around 5.45 p.m. local time and lasted for approximately 15 minutes, according to authorities and the Daily Mail.

"It [Kaiyuan] is flat area at the latitude of Tornado Alley of the United States," AccuWeather Meteorologist Jim Andrews said.

While tornadoes in this area aren't rare, Andrews said they aren't common either.

"Northeast China can and does get occasional major tornadoes, although my understanding is that it falls far short of the twister density of the U.S. tornado belt," Andrews said.

Hurricane Barbara continues to roar in Eastern Pacific, peaked close to Category 5 strength ‘Smell of bourbon fills the air’ as massive fire engulfs Jim Beam warehouse in Kentucky More rain soaks Japan after 1-day rain totals exceeding 16 inches trigger deadly mudslides, flooding Could an epic hailstorm like the recent one in Mexico occur in the US?

Several conditions are required to be just right for the development of a tornado, and according to Andrews, conditions were optimal.

"From what I can tell, the weather map Wednesday showed a stalled front nearby with temperature in the mid 80s F (near 30 C), dewpoints in the 60s F (upper teens C); all in all, favorable for thunderstorms," Andrews said.