Catch the second of three supermoons on Feb. 18-19. It is when the Moon is at its closest approach to Earth. Try to catch the Moon when it rises just above the horizon for the best viewing.

The Snow Moon will shine brightly on the night of Monday, Feb. 18, 2019, even in areas where snow is not on the ground. But how did the moon earn this nickname?

Each month features a full moon, when the sun illuminates the entire Earth-facing side of our celestial neighbor.

Over the years, each full moon has been given a nickname that can often be linked to the month in which it falls, such as the weather or what plants are in bloom.

Some nicknames are centuries old, dating back to Native American tribes or early Colonial Americans settling in North America. 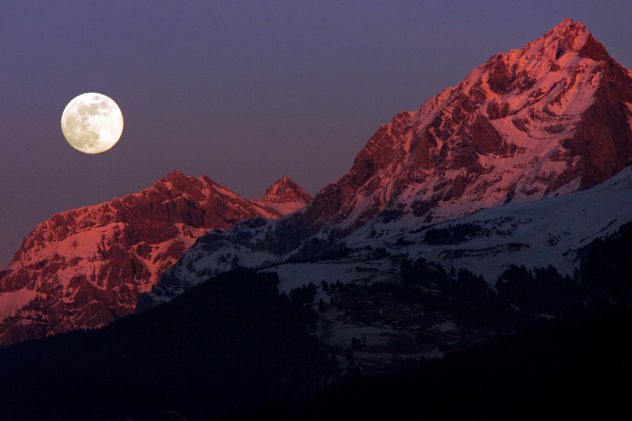 The moon rises above the western Swiss alps, seen from Monthey in the canton of Valais, on the eve of full moon, Thursday, February 1, 2007. (KEYSTONE/Olivier Maire)

“Traditionally, the moon we see in February is called the Snow Moon due to the typically heavy snowfall of February,“ the Old Farmer’s Almanac said on its website.

The Snow Moon is just one of many nicknames bestowed upon February’s full moon by cultures from around the world. Another common name is the ‘Bone Moon.’

“The Bone Moon meant that there was so little food that people gnawed on bones and ate bone marrow soup,” the Old Farmer’s Almanac reported. 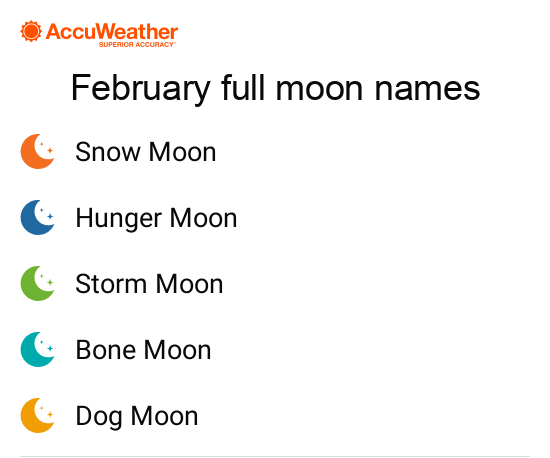 This February’s full moon may appear slightly different than it has in past years as it will also be the second of three supermoons of 2019.

Since the moon doesn’t orbit the Earth in a perfect circle, there are times where it is closer to the planet and times when it is farther away. When a full moon falls when the moon is closest to the Earth, or near perigee, it will appear slightly larger and brighter than normal.

In recent years, this has been commonly called a supermoon.

Folks around the globe can catch the full moon on Monday night, but it won’t officially be 100 percent full until 10:53 a.m. EST on Feb. 19.

People that miss out on the 'super Snow Moon' can also catch it on Tuesday night, as it will still appear full in the night sky.

This will be the last full moon of the winter as the next one will fall just hours after the spring equinox on March 20.

Editor's note: February is the only month where it is possible that there is no full moon. This happens every 19 years, most recently occurring in 2018.