Man tackles seal, wrestles it on beach to save it from life-threatening situation

After spotting a seal with fishing line wrapped around its neck on a beach in Walvis Bay, Namibia, on March 22, Naude Dreyer jumped into action. He recorded the entire thing on his GoPro to raise awareness about the problem of abandoned fishing line which injures and kills millions of sea creatures. The seal gave him a hard time, but Dreyer was able to remove the fishing line.

An incredible act of human kindness was captured on video and shows a conservationist helping a mammal suffering from human-caused pollution. The footage is difficult to watch at times, but also important and life-affirming to see.

Naude Dreyer, who owns a kayaking business in Walvis Bay, Namibia, discovered a seal with thick cords of commercial fishing line wrapped around its neck on March 22. The friction from fishing line cut through the seal’s fur coat and left a severe laceration around its neck.

Dreyer is no stranger to mammal rescue. He told Storyful he often helps out the Namibian Dolphin Rescue Project, a research and conservation program focused on studying coastal dolphins and whales in Namibian waters, with its efforts. The group’s goal is generating information that can be useful for science and dolphin management. 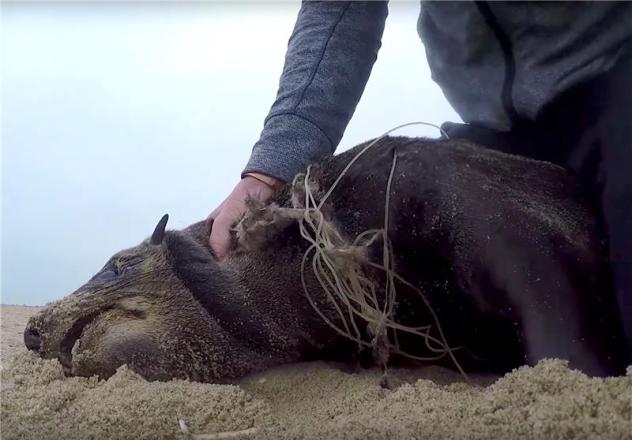 Dreyer managed to record video of his encounter with the suffering seal using his GoPro. The video shows him chasing the injured mammal, grabbing the powerful seal from behind and wrestling it to the sand. Not so easy. While straddling the seal, Dreyer uses special scissors to saw away at the fishing line rubbing its neck raw.

This sweet seal isn’t the only animal Dreyer helped that day. He shared the footage on his Instagram account, telling followers, “Got 2 seals today. This one is a little bigger than usual and she nearly, nearly got a piece of my leg! Usual suspects -- thick commercial fishing line probably discarded overboard.” The gash around the seal’s neck caused by the fishing line looks bad, but, in his post, Dreyer assured his followers she’ll be fine. “Even though the wound looks terrible, she will heal up quite quickly in the salt water.”

Dreyer’s Instagram page shows this seal rescue wasn’t his first rodeo. There are several videos of similar seal rescues. One posted in January admonishes those who pollute beaches and oceans with fishing line. “Shame this poor fellow was trapped in a massive ball of fishing line. I spent about 5 minutes trying to cut through probably 20 strands of 1.5 mm monofilament line.”

What a guy! His work is desperately needed.

A 2018 survey by scientists with Ocean Cleanup, found that almost half of the plastic in the “Great Pacific Garbage Patch” comes from fishing nets. Miscellaneous discarded fishing gear makes up most of the rest. Ocean currents, impacted by wind patterns, figure heavily into not only the distribution of plastic pollution in the oceans, but also the planet’s climate and overall weather patterns.

World Animal Protection reports that abandoned fishing equipment, called “ghost gear,” poses one of the biggest threats to sea life. “A staggering 640,000 tons of gear is left in our oceans each year. This gear traps, injures, mutilates and kills hundreds of thousands of whales, seals, turtles and birds annually,” the group says on its website.

The group, like Naude Dreyer, works to protect animals from fishing lines and nets by supporting new ways to remove gear from the seas, assisting rescue teams in saving entangled animals and urging people not to abandon their gear. As Dreyer advises on his Instagram, “People -- take your discarded fishing line home!”