Thousands without power in Ireland following direct hit from Lorenzo

As Lorenzo inched closer and closer to Ireland on Oct. 3, the storm's powerful winds lashed the country's west coast, causing the surf to be rough. Wind gusts along the coast are expected to reach upwards of 75 mph.

After Lorenzo lashed the Azores with fierce winds and pounding surf, residents of the United Kingdom and Ireland were the next in line to face significant impacts from the storm.

Despite Lorenzo transitioning into a post-tropical cyclone late on Wednesday morning, the system's impacts were felt across Ireland on Thursday and Thursday night.

As Lorenzo moved through Ireland, gusty winds brought power outages for thousands. The BBC reported that over 20,000 people were without power late Thursday night. Even with crews actively working overnight, at least 7,500 homes were still without power late on Friday morning.

In addition to power outages across the country, downed trees also made an appearance for the morning commute for many. 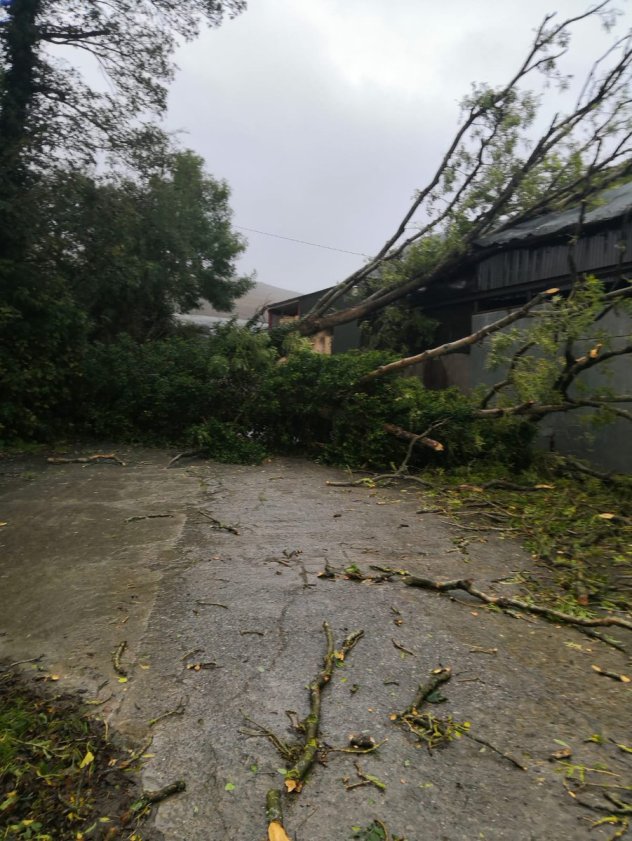 Above image shows tree damage in Ireland on Friday morning, due to the strong winds from Lorenzo. (Twitter/@oonshogan)

Wind gusts peaked at 53 mph (85 km/h) in Shannon, Ireland, early on Friday morning, just west of Limerick. In the Knock-Connaught areas, wind gusts of 51 mph (82 km/h) were reported. The strongest wind gusts were mostly confined to western parts of the country.

On twitter, the Dublin airport reported flights were operating as normal, with lesser winds.

While some modest weakening will continue as the storm moves through the British Isles, Lorenzo is likely to bring rainy spells, and some pockets of breezy conditions through Friday.

Lorenzo will track around an area of high pressure centered over Spain which will act as a shield, preventing Lorenzo from reaching the Iberian Peninsula.

As of late morning on Friday, a dozen or so places across Ireland and the United Kingdom were reporting over 20 mm of rainfall since Thursday morning.

Rainfall from Lorenzo, on top of recent heavy rain, will result in flooding across Ireland, Northern Ireland, Wales and western England into Friday night.

Satellite animation of Lorenzo tracking north of the Azores on Wednesday.

"In addition to flooding from Lorenzo's rainfall, significant coastal flooding at high tide and rough waves will be a concern," said AccuWeather Meteorologist Tyler Roys.

Dangerous seas will also threaten any boating and shipping interests through Friday with increasingly rough seas across the Irish Sea, British Channel and southwestern parts of the North Sea.

Impacts ranging from coastal flooding to gusty showers may extend as far as northern France and may extend into western Belgium into Friday night.

Strong winds and heavy rain are not expected from western France into the Iberian Peninsula. However, large swells from Lorenzo will pose hazards to marine traffic and coastal communities.

Enormous waves from the #Azores islands, Portugal this morning 2nd of October due to the passing of #HurricaneLorenzo overnight. Report Meteorolojik IG #severeweather #Lorenzo pic.twitter.com/fJcmP7kazR

Lorenzo became a Category 5 major hurricane Saturday night, prior to weakening some on Sunday and Monday. In doing so, Lorenzo became the strongest hurricane to be located that far north and east in the Atlantic.

Colorado State University Meteorologist Philip Klotzbach said that Lorenzo became the largest hurricane this far east in the Atlantic on record. Records for Atlantic hurricane size go back to 1988, he said on Twitter.

The main port on the island of Flores was severely damaged by rough seas and powerful winds, according to the Azores Civil Protection Agency.

At least 39 people had to be evacuated, and no injuries have been reported.

The powerful winds also caused widespread downed trees and power lines across several of the islands.