A King Tide is a non-scientific term people often use to describe exceptionally high tides.

Portions of the Florida Keys and Barrier Islands east of Miami began to feel the effects of the incoming King Tide last Friday as saltwater erased area beaches and inundated low-lying roadways.

On Saturday morning, the tide measured at Virginia Key reached 2.94 feet above mean sea level, which is the second highest water level of the year, with Dorian's assisted storm surge of 2.95 feet on Sept. 3 remaining the highest, according to Brian McNoldy, a Senior Research Associate at the University of Miami's Rosenstiel School.

Some locales across South Florida can continue to expect to have high-tide cycles some 3 feet above normal levels into Monday. 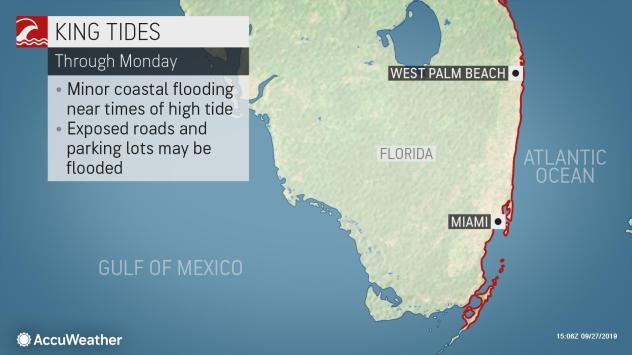 These exceptionally high tides are caused by the gravitational force of both the sun and the moon on the oceans, acting to displace more ocean water into certain areas.

The cities of Miami and Miami Beach are no stranger to this phenomenon and the issues that come along with it.

More than a dozen temporary pumping stations have been put in place across Miami Beach alone in anticipation of the sunny day flooding. 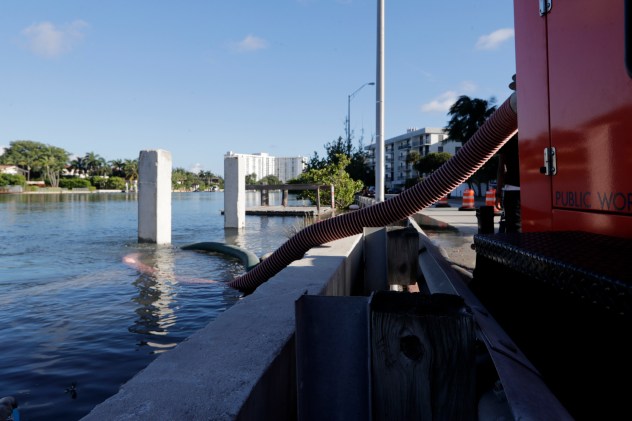 A temporary pumping station is set up along the Intracoastal Waterway to prevent flooding during a king tide, Saturday, Sept. 28, 2019, in Miami Beach, Fla. Low-lying neighborhoods in South Florida are vulnerable to the seasonal flooding caused by king tides. (AP Photo/Lynne Sladky)

The weather forecast across South Florida into Monday won't lend many favors for easing flooding concerns.

Gusty easterly trade winds in place over the region will generate waves that act to further the flood threat, especially for areas along the immediate coasts.

Luckily, no tropical threats are in the forecast for South Florida during this time of exceptionally high tides.

Residents are advised to prepare for high-tide events to minimize damage to property.

Motorists who drive through standing water should wash the undercarriage of their vehicle to avoid rust formation.

Salt water can also be damaging to plants. Gardens should be flushed out with fresh water after the tides recede to avoid damage.

The excessively high tides are expected to settle down after Monday as the moon heads towards the first quarter phase.

Additional higher-than-normal tides are forecast near the Oct. 13 full moon and again during the next new moon around Oct. 27.

Download the free AccuWeather app to stay aware of the latest forecast for your area. Keep checking back for updates on AccuWeather.com and stay tuned to the AccuWeather Network on DirecTV, Frontier and Verizon Fios.