How wildfires leave communities vulnerable to flooding, mudslides for years

Wildfires burn millions of acres of land across the United States every year, but the communities around a fire may feel the impacts long after it has been extinguished.

Wildfires of every size leave behind something known as a burn scar, or the area of land charred by flames and left devoid of vegetation.

Larger fires such as the Thomas Fire, which burned over 280,000 acres in Southern California in 2017, can leave behind burn scars large enough to be seen from space.

More damage and destruction can occur in areas surrounding a burn scar for years before trees and vegetation grow back to normal. 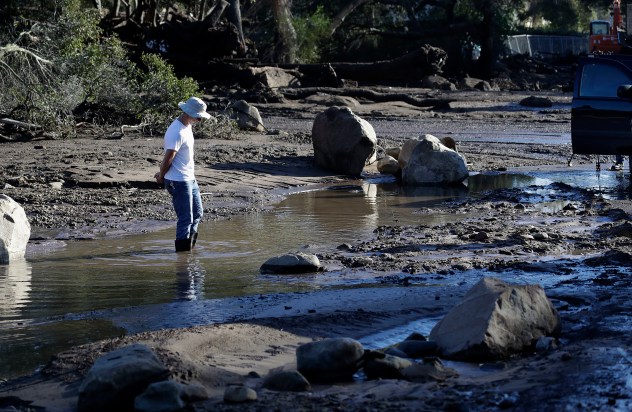 A man stands in flooded waters in Montecito, Calif., Wednesday, Jan. 10, 2018. Dozens of homes were swept away or heavily damaged and several people were killed on Jan. 9, 2018, as downpours sent mud and boulders roaring down hills stripped of vegetation by a gigantic wildfire that raged in Southern California in December 2017. (AP Photo/Marcio Jose Sanchez)

Flooding and debris flows can happen with little warning in burn scars and most commonly occur during a heavy thunderstorm or major rainstorm.

“Rainfall that would normally be absorbed will run off extremely quickly after a wildfire, as burned soil can be as water repellent as pavement. As a result, much less rainfall [than normal] is required to produce a flash flood, “ The National Weather Service (NWS) said.

In some cases, less than a half an inch of rain can be enough to trigger a damaging flash flood or debris flow. However, the more rain that falls, the more intense the flooding event will be.

“Locations downhill and downstream from burned areas are very susceptible to flash flooding and debris flows, especially near steep terrain," the NWS said.

The rushing water and debris can quickly damage anything in its path, washing out roads, carrying vehicles downstream and demolishing homes and buildings.

Even areas outside of a burn scar can be impacted as water, mud and debris surge downstream. 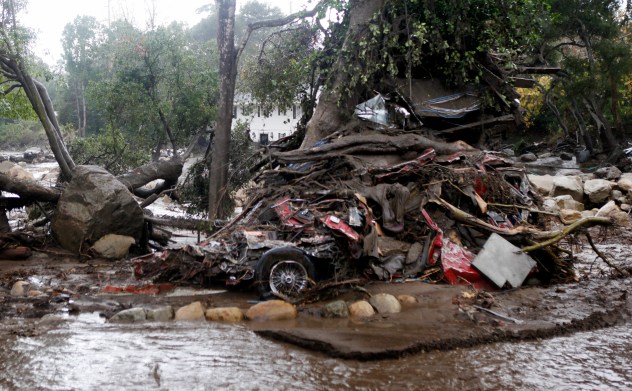 In most cases, it takes up to two years for enough vegetation to grow back in the burn scar to keep the soil in place during periods of heavy rain with the greatest risk being the months immediately following the fire.

“The big thing is people that live near these burn scar regions have to be more prepared than usual for potential for flooding, mudslides and debris flows,” Clark said.

Evacuation checklist: How to get your family out safely in the face of an imminent disaster
VIDEO: What can you do to protect your home after a flood?
How to prepare for wildfires so you can escape safely if a blaze approaches
5 dangers to be aware of after a flood strikes
Preparing for the costliest weather disaster in the US: How to stay safe before, during and after a flood

California is one state that is particularly at risk of this type of flooding due to the frequency of wildfires during the summer, fall and early winter.

The active wildfire season paired with the mountainous terrain across the state and the heavy winter rainstorms is a recipe for floods and mudslides near burn scars every winter.

However, this destructive, sometimes deadly weather phenomenon can happen almost anywhere across the country near the site of a recent wildfire.

People that live near a burn scar should prepare well before the arrival of rain in the event that mandatory evacuations are ordered.