Looking for something different in the night sky? Try to catch the International Space Station as it flies above the eastern United States and Canada on Sept. 19-20. Here's how you can see the space station.

An unusually bright object will glide across the evening sky late this week, appearing brighter than all of the stars and planets in the sky, but you'll need to know where and when to look up.

Friday evening will bring the perfect opportunity for those across the eastern United States to see the International Space Station (ISS) fly overhead. Not only will the space station appear incredibly bright, but largely cloud-free weather will lead to uninterrupted viewing conditions.

The ISS will outshine all of the stars and planets in the sky, making it easy to spot. However; it will only be visible for a few minutes, so knowing what time to look is very important.

The International Space Station orbiting the Earth at 17,500 mph. (Video/NASA)

People all across the eastern U.S. will be able to see the station, including those from Atlanta through Boston.

“You can't miss the ISS, even in urban areas, as it is as bright as Venus [the third brightest natural object in the sky],“ AccuWeather Astronomy Blogger Dave Samuhel said.

“It will appear like a plane at first, but you will notice the steady movement without flashing lights as it grows brighter,“ Samuhel added. 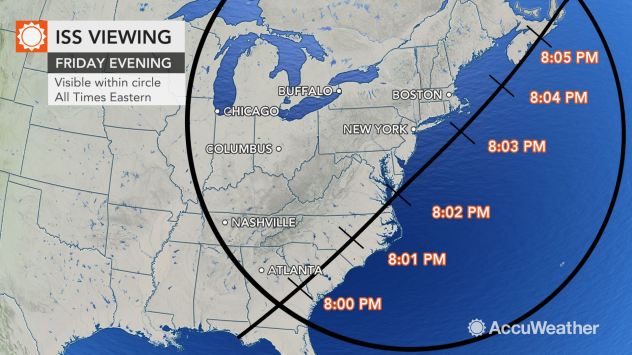 Friday evening will be the best night of the week to see the station fly through the night sky as it will shine even brighter than it did on Thursday evening.

It will first appear in the southern sky just before 8 p.m. EDT, climb high in the sky and gradually head toward the northwest before disappearing around 8:05 p.m.

NOTE: The times listed above are approximates for viewers in and around New York City. The precise time may vary by a minute or two based on your location. To find a more exact time when the ISS will be visible in your area, check NASA’s Spot the Station website or by using the widget below.

Folks may still be able to spot the space station on Saturday and Sunday evenings, but it will not be quite as bright as Friday evening. To find out what time you will be able to see the ISS beyond Friday, use NASA’s Spot the Station widget above.

For nearly 20 years, the ISS has served as a scientific outpost for astronauts where they conduct research and experiments in near-zero gravity.

Traveling at a speed of 17,500 mph, the station orbits the Earth once every 90 minutes. Although it is always flying through the sky, it is typically only able to be seen by the naked eye during certain times of the day.

“Unlike the Moon, the space station isn’t bright enough to see during the day. It can only be seen when it is dawn or dusk at your location,” NASA said. “The space station is visible because it reflects the light of the Sun – the same reason we can see the Moon.” 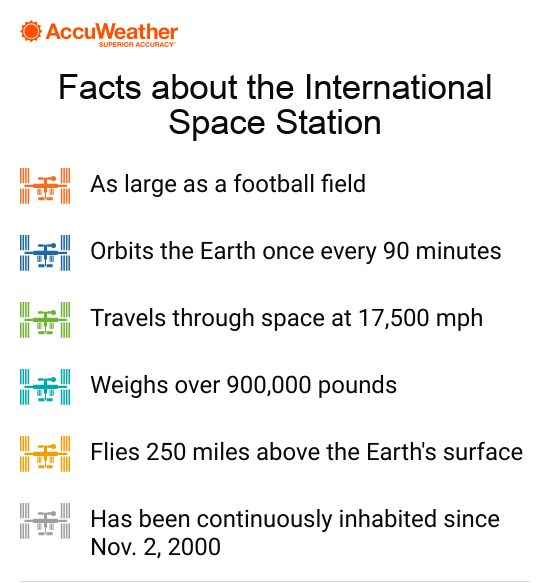