One year after Hurricane Harvey made landfall in the United States, thousands of those impacted by the storm are still coping with lingering mental health impacts.

“What is not reported is the universal traumatic stress survivors feel long after the floodwaters go away,” Figley told AccuWeather.

Frequent reported symptoms include fear of water, rain, flooding and anything associated with them, according to Figley. Sufferers also experience disturbed sleep, fatigue, impatience, anger, anxiety, discouragement and lack of hope. 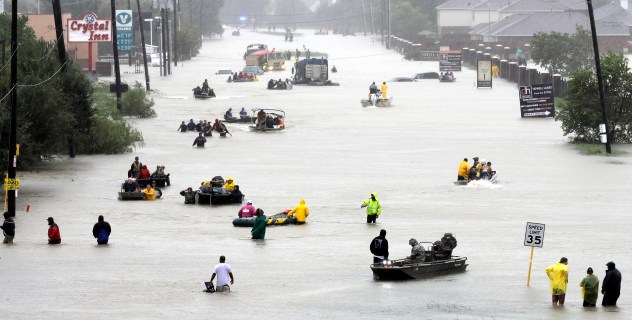 More than a third of Houston's population was displaced after Harvey soaked the area with record rainfall in August 2017. The National Hurricane Center released a report stating that Harvey, which made landfall as a powerful Category 4 storm, was “the most significant tropical cyclone rainfall event in U.S. history, both in scope and peak rainfall amounts, since reliable rainfall records began around the 1880s.”

A recent study from the University of Texas Health Science Center at Houston (UT Health) found that four months after the storm, 18 percent, or more than 800,000, of 4.7 million Harris County residents continued to struggle with serious psychological distress linked to Harvey.

The study also showed that the number rose to 37 percent among those whose vehicles were seriously damaged, and to 48 percent among residents whose homes were ruined.

“Crime rates can increase and substance use rates typically increase,” said Dr. Leslie Taylor, assistant professor at UT Health’s Department of Psychiatry and Behavioral Sciences. “People are just not in the same place that they [once were].”

“[Eighteen percent] is much higher than we were in 2010, at 8 percent,” Taylor told AccuWeather. “Within four months of the storm, there was a higher rate of anxiety, depression [and similar] symptoms.”

Experts have said that the complete scope of mental health impacts stemming from surviving Harvey, which killed at least 80 people, won’t be known possibly for years, and that for some people, it can take between six and 18 months for mental health effects to fully appear.

A Kaiser Family Foundation/Episcopal Health Foundation survey from December 2017 showed that in the Beaumont-Port Arthur area of Texas, which was pounded by Harvey’s torrential flooding, 33 percent of residents believed that the trauma of the storm impacted their mental health, according to the Texas Medical Association.

Often, cases of post-traumatic stress disorder (PTSD) are overreported, and PTSD can’t be diagnosed for at least 30 days following the trauma, according to Figley. "Most often, these symptoms gradually go away.” 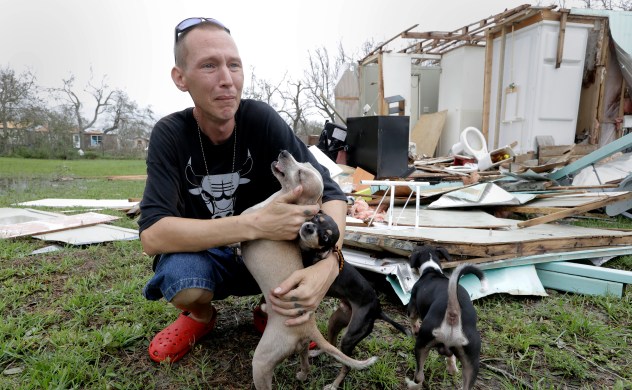 Sam Speights tries to hold back tears while holding his dogs and surveying the damage to his home in the wake of Hurricane Harvey on Aug. 27, 2017, in Rockport, Texas. (AP Photo/Eric Gay)

Mental health first aid workers that provided services in the aftermath of Harvey estimate that 20 percent of people developed PTSD after the hurricane, said Dr. Darlene Lobel, a neurosurgeon previously at Cleveland Clinic and Cleveland Clinic Fairview Hospital in Ohio.

"[Although] PTSD often will get better in time, symptoms improve much faster with treatment, and if left untreated, symptoms can become so severe that it can lead some people to [take their own lives],” Lobel said.

She recommended that post-disaster PTSD sufferers seek medical help from a psychologist or psychiatrist who can regularly help with counseling and medications, if needed.

“In very severe cases, there is a brain surgery known as deep brain stimulation, or DBS, that shows some promise to help decrease PTSD symptoms,” Lobel said.

Healing after trauma: How utilizing meditation offers disaster survivors hope beyond the wreckage
1 year after Harvey’s catastrophic blow to Texas: By the numbers
1 year after Harvey: How have the hundreds of billions of federal relief, donations been distributed?

For some people, the approaching anniversary of the deadly storm might potentially trigger symptoms of PTSD, according to experts. “An anniversary can definitely bring back memories, and that can cause PTSD to skyrocket,” said Dr. Regardt Ferreira, an assistant professor at Tulane University’s School of Social Work.

Triggers could be overcast weather conditions or even a smell that reminds them of the traumatic event.

“Talking to folks and communities [in Puerto Rico after Hurricane Maria], every time it gets overcast, anxiety and depression kicks in, because it brings back memories of the actual event,” said Ferreira.

“Each individual is unique,” he added. “You might have folks that are on autopilot mode for months or even years, and one day, there might be a trigger.”

Although potentially triggering for some PTSD sufferers, Ferreira said that acknowledging anniversaries of traumatic events can be beneficial to a person’s recovery.

“It’s an opportunity to look back and reflect on how far a person has come with their recovery and to assess their growth, post-disaster or post-event,” he said.