While sunscreen is meant to protect us from the sun’s harmful rays, studies have shown that two chemicals in many sunscreens are hurting the environment.

Lawmakers in Hawaii are currently seeking to take action to reduce this environmental risk by legislating a ban of certain sunscreens with harmful ingredients.

State lawmakers passed legislation on Tuesday, May 1, that would ban skin care companies from selling and distributing sunscreens on the islands that contain two chemicals, oxybenzone and octinoxate, considered damaging to coral reefs.

The purpose of Senate Bill 2571 is preserve marine ecosystems, including coral reefs. 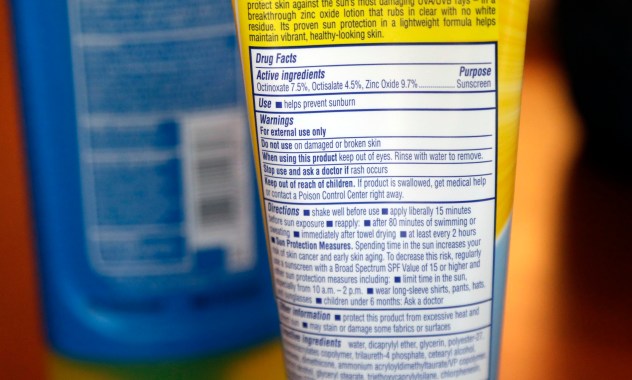 Sunscreen ingredients, including octinoxate, are shown Wednesday, May 2, 2018, in San Jose, Calif. Many sunscreen makers could soon be forced to change their formulas or be banned from selling lotions in Hawaii. (AP Photo/Marcio Jose Sanchez)

If Hawaii Gov. David Ige (D) signs the bill, Hawaii would be the first state to enact legislation designed to protect marine ecosystems by banning such sunscreens. The bill would go into effect in 2021.

“Amazingly, this is a first-in-the-world law,” state Sen. Mike Gabbard, a Democrat who first introduced the bill, said in an e-mail to the Star Advertiser. “So, Hawaii is definitely on the cutting edge by banning these dangerous chemicals in sunscreens. When you think about it, our island paradise, surrounded by coral reefs, is the perfect place to set the gold standard for the world to follow. This will make a huge difference in protecting our coral reefs, marine life and human health.”

Oxybenzone and octinoxate are shown to cause mortality in developing coral, increase coral bleaching that indicates extreme stress and cause genetic damage to coral and other marine organisms, according to the bill.

“The legislature finds that environmental contamination of the chemicals persists in Hawaii's coastal waters, as the contamination is constantly refreshed and renewed every day by swimmers and beachgoers,” the bill reads.

Studies have shown that pollution from these chemicals isn't only coming from wearing the sunblock swimming in the ocean.

Sewage contamination of coastal waters is another source of oxybenzone and octinoxate environmental contamination, as these chemicals are not removed by the state's wastewater treatment system, according to the bill.

How to use sunscreen for maximum UV ray protection Surprising things you didn’t know about your sunscreen Experts explain how to detect the warning signs of skin cancer How to use the UV Index to protect yourself from the sun’s harmful rays Are you more prone to sunburn? Dermatologists explain key risk factors

NPR reported that a 2015 study of coral reefs in Hawaii, the United States Virgin Islands and Israel determined oxybenzone "leaches the coral of its nutrients and bleaches it white. It can also disrupt the development of fish and other wildlife."

Even slight exposure is enough to damage these fragile coral ecosystems.

Researchers at the time of the study estimated about 14,000 tons of sunscreen lotion ends up in coral reefs around the world each year.

The damage of these chemicals can be reversed, Lisa Bishop, president of Friends of Hanauma Bay, said to NBC4.

"The half-life of oxybenzone is about two-and-a-half years. So this is very doable. If we start, the bill will help significantly cut back on the amount of pollution in areas," Bishop said to the news station.

Coral reefs have numerous benefits for the state, such as protecting the coastline, harboring marine life and serving as key tourist attractions for the state. The chemicals oxybenzone and octinoxate are used in more than 3,500 of the world's most popular sunscreen products, including Hawaiian Tropic, Coppertone and Banana Boat, NPR reported.

Prescription sunscreens containing those chemicals would still be permitted.

The proposed law was opposed by ABC Stores, the Hawaii Medical Association, the Hawaii Food Industry Association, Chamber of Commerce Hawaii, the Personal Care Products Council and Bayer, which manufactures sunscreens by Coppertone, according to the Star Advertiser.

The Washington Post reported that many organizations have made public statements in opposition to the ban.

Bayer said in a statement that the company intends to comply with the legislation, but that “eliminating the use of sunscreen ingredients considered to be safe and effective by the Food and Drug Administration (FDA) with a long history of use not only restricts consumer choice, but is also at odds with skin cancer prevention efforts. What has been scientifically proven is that exposure to UV radiation from the sun causes skin cancer, and sunscreen is one of the most effective ways to protect yourself from UV exposure, in addition to wearing protective clothing, sunglasses and staying in the shade.”

The Consumer Healthcare Products Association (CHPA) released a statement in response to the Hawaii sunscreen ban, stating that it would severely compromise the safety and welfare of millions of Hawaii residents and tourists by banning at least 70 percent of the sunscreens on the market today.

The statement argued that the ban was based on weak science, blaming sunscreens for damage to coral reefs.

"This irresponsible action will make it more difficult for families to protect themselves against the sun’s harmful ultraviolet rays, and it is contrary to the many concerns expressed by Hawaii’s medical doctors, dermatologists and public health experts,” the statement reads.

"Banning oxybenzone and octinoxate – key ingredients in effective sunscreens on the market – will drastically and unnecessarily reduce the selection of safe and effective sunscreen products available to residents and visitors. Oxybenzone and octinoxate, found in the majority of sunscreens, are safe and effective over-the-counter active ingredients recognized by the FDA as important aides in decreasing the risk of developing skin cancer, the most common cancer in the U.S.,” the statement reads. 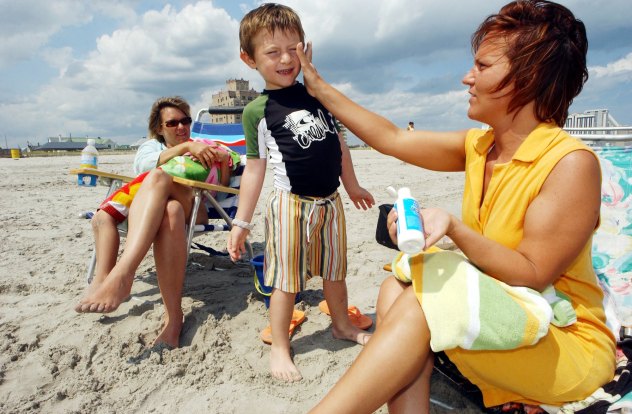 A woman applies sunscreen to a little boy on the beach at Atlantic City, New Jersey. (AP Photo / Mary Godleski)

Both oxybenzone and octinoxate are FDA-approved chemicals for providing protection against the sun’s rays. There is no definitive data showing that any of these ingredients are harmful to our health, according to the FDA.

However, some organizations feel that chemical sunscreens could have other harmful effects. A few companies, such as All Good, have been making sunscreens without oxybenzone and other potentially toxic chemicals for years. The Huffington Post outlines some of the potential negative impacts of these chemical sunscreens.

Mineral sunscreens that use zinc oxide or titanium dioxide to physically block the sun's rays are still allowed.