'Green snow' to become a more regular occurrence in Antarctica

Algae blooms turn the snow bright green in warmer areas of Antarctica during the summer, and scientists found it will likely spread due to rising temperatures.

May 20 (UPI) -- Green snow algae is likely to become more abundant across Antarctica's coast as global temperatures continue to rise, according to research by a team of scientists from the University of Cambridge and the British Antarctic Survey.

Each individual algae is microscopic, but when they grow en mass, they stain the snow green. The blooms can be mapped using aerial surveys and satellite images. 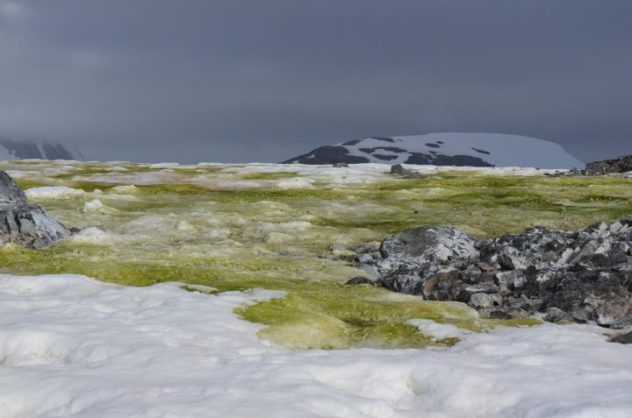 "This is a significant advance in our understanding of land-based life on Antarctica, and how it might change in the coming years as the climate warms," lead researcher Matt Davey, a plant physiologist and chemical ecologist at Cambridge, said in a news release. "Snow algae are a key component of the continent's ability to capture carbon dioxide from the atmosphere through photosynthesis."

Researchers created their map using images captured between 2017 and 2019 by the European Space Agency's Sentinel 2 satellite. Scientists supplemented the satellite data with on-the-ground field observations. Some of the largest splotches of green were found on islands along the west coast of the Antarctica Peninsula, where warming has been most pronounced over the last several decades.

In addition to the correlation between green snow blooms and warmer temperatures, researchers also found a link between coastal algae blooms and the presence of marine birds and mammals -- bird excrement is rich in nutrients that fuel algae growth.

More than 60 percent of the green snow blooms analyzed by scientists were found within a few miles of penguin colonies, and many other large blooms were identified near the nesting sites of other bird species.

While warming temperatures are likely to encourage larger green snow algae blooms across most of the Antarctic, climate change is likely to leave at least some low-lying islands without summertime snow cover, robbing the islands of their green snow blooms.

"As Antarctica warms, we predict the overall mass of snow algae will increase, as the spread to higher ground will significantly outweigh the loss of small island patches of algae," said Cambridge researcher Andrew Gray, lead author of the new paper.