Florence may track near Bermuda, US East Coast while it restrengthens in Atlantic

In a moment you will be redirected to the latest forecast story for Florence.

Florence is forecast to restrengthen into a hurricane and push close to Bermuda and the United States East Coast this week. Florence may evolve into a serious direct threat.

After forming near the Cabo Verde Islands last weekend, Florence became the first Category 4 hurricane of the 2018 Atlantic season as it entered a zone of low wind shear and sufficiently warm waters last week.

Wind shear is the increase in wind speed and change in wind direction with either increasing altitude or over a horizontal distance. High wind shear can prevent a tropical storm from forming and cause a well-developed hurricane to weaken.

A zone of strong wind shear has caused Florence to weaken to a tropical storm. Additional fluctuations in strength are anticipated. 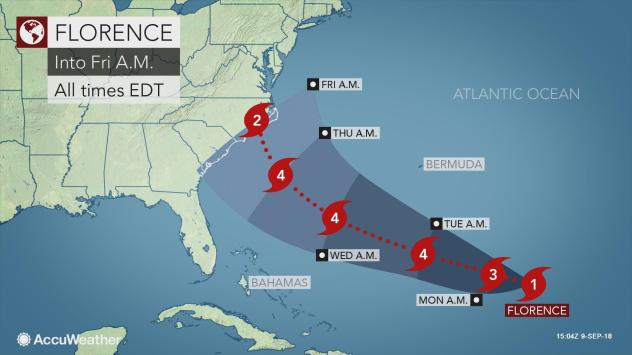 Over the next few days, wind shear is forecast to diminish, while at the same time Florence moves over much warmer water. As a result, AccuWeather meteorologists expect Florence to gain strength.

The movement of Florence is likely to remain steady in the short term, but a deviation in the path may develop this week.

"An area of high pressure over the central Atlantic will bridge westward and join with an existing high pressure near the U.S. East coast over the next several days," according to AccuWeather Hurricane Expert Dan Kottlowski.

"This setup will guide Florence on a west to northwesterly course this week," Kottlowski said. 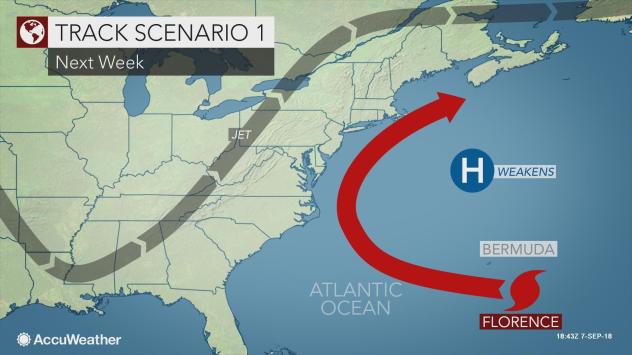 If the high pressure area weakens, then Florence may be able to curve northward then northeastward out to sea with impacts in the U.S. limited to an indirect nature with rough surf and heavy seas.

However, if the high pressure area remains strong, then Florence may complete a 3,500-mile-long journey over the Atlantic and be guided right into the U.S. East Coast somewhere from the Carolinas to southern New England sometime during the second half of the week.

AccuWeather meteorologists are favoring this latter solution, which will bring more severe impacts to the U.S. East Coast. 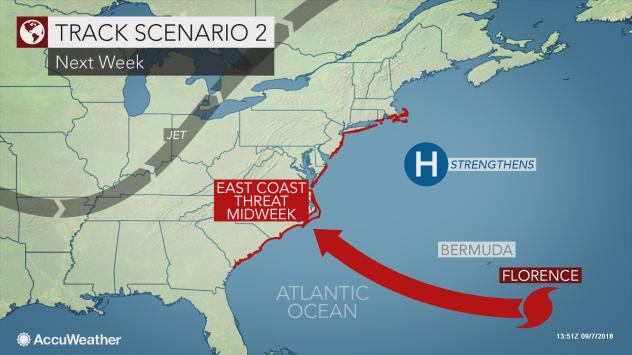 Depending on the strength of Florence at that time, such a landfall could have severe consequences in terms of wind damage, coastal storm surge and inland flooding from torrential rainfall. The flood risk would be even higher for areas in the eastern U.S. that have seen rounds of heavy rain in recent weeks.

There is the potential for Florence to regain Category 4 hurricane status this week.

States of emergency have already been declared in North Carolina,South Carolina and Virginia due to the possible impacts from Florence.

Prior to the chance of Florence reaching the U.S. East Coast, Bermuda will face rough surf and an increase in rip currents as the storm likely passes to the south of the island.

Swells propagating outward will build northwestward a thousand miles ahead of Florence this week.

The swells will make for rough seas along and well off the U.S. coast, Bermuda, the northern shores of the Caribbean islands and the south- and southeast-facing shores of the Canada Maritimes. 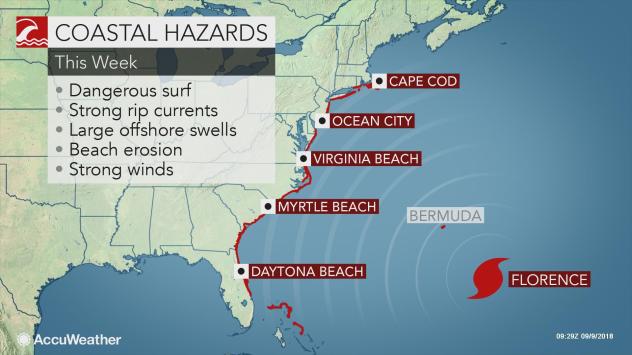 The surf may be especially hazardous, since most lifeguards are not on duty past Labor Day. There is the potential for significant beach erosion in lieu of a direct strike.

"While it is too early to change plans, all interests along the East Coast of the U.S. should closely monitor the movement of Florence," Kottlowski said.

If property owners in these areas have not yet prepared for hurricane season and formulated a plan of action, now may be the time. There is the potential that cruise lines may have to alter their itinerary and freighters may have to delay or alter their routes.