Experts explain the health risks of peeing in a pool

Many swimmers don't think about the effects of pee and trust the power of the chemicals in the water. However, the chemical byproducts that result from urine and chlorine aren’t as harmless as some swimmers may think.

There can be anywhere from eight to 20 gallons of urine in a typical pool, according to a study by the University of Alberta.

By not peeing in the pool, showering before entering the pool and washing these substances from the skin, swimmers can help minimize pool smell and safety of the pool.

"Urine is meant to be discarded because it is a waste product of human metabolism. It is a necessary by-product of living, breathing, eating and drinking, but it eliminates excess acid and nitrogen to keep our bodies in balance," said Dr. Matthew Karlovsky, double board certified in urology and female pelvic medicine with the Arizona State Urological Institute.

According to Karlovsky, nitrogen is what gives urine its pungent smell and yellow color.

"Urine is acidic but doesn't get any more acidic than a pH of five which is not very acidic, but it is why it can burn or irritate the skin if it contacts the skin continuously such as with a diaper or pad," Karlovsky said. 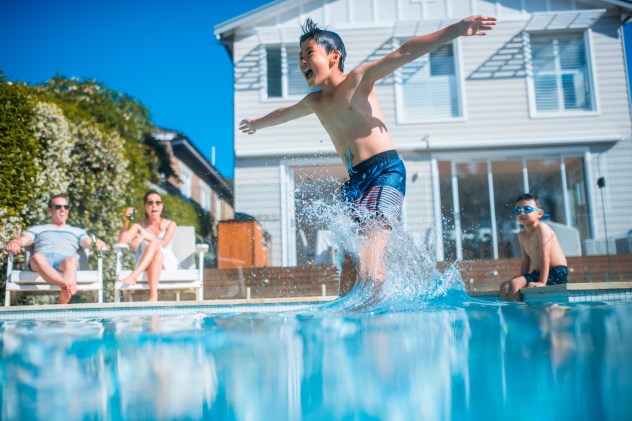 Family having fun in the backyard. Kids are swimming. (AzmanL/Getty Images)

Karlovsky said urine is relatively harmless unless someone has blood in the urine, or an active urinary tract infection (UTI). If someone is ill with blood in the urine or a UTI, they should stay out of the pool until they are recovered.

"If someone were to urinate in the pool with either blood or urine infected with bacteria near you while in the pool, there is always the chance of coming in contact with it and the small risk of acquiring an infection," Karlovsky said.

When urine is combined with chlorine disinfectant, the combination of the two can pose many risks.

The American Chemical Society released a video explaining why peeing in the pool makes it a more unhealthy environment for all swimmers.

"Pee contains urea which reacts with the chlorine disinfectant to form trichloramine," Dr. Susan Richardson said, Arthur Sease Williams, professor of Chemistry Department of Chemistry and Biochemistry at the University of South Carolina.

Trichloramine is a disinfection by-product (DBP) that is a known respiratory irritant and is the suspected cause of asthma in elite swimmers.

"It is also implicated in red eyes, coughs, and other cold-like symptoms people get when going to indoor pools. Heavy swimmers have nasal tracts similar to heavy smokers, where their cilia (the first defense against allergens that cause colds) are disintegrated due to pool chemicals like trichloramine getting into the air," Richardson said.

Richardson said trichloramine is also the classic pool smell, it's not chlorine. So, when you smell that "pool smell" that it is because of people peeing in the pool.

The pool smell is technically caused by chloramines, which are chemical compounds that build up in pool water when it is improperly treated, according to the American Chemistry Council.

There is no odor to a well-managed pool.

"On average, each person contributes about 70 mL of urine in a public pool. Sweat also contains urea, so some of the trichloramine is coming from heavy swimmers who sweat, but the vast majority is believed to come from urine," Richardson said.

What does it mean when a beach is closed due to water quality?
5 hidden hazards of summertime swimming
Drowning: What parents need to know before taking their child swimming

People who take medications and pee in pools can add to the multitude of chemicals.

"People also pee out pharmaceuticals they are taking that will also be in the water you are swimming in. Some of these can also contribute to disinfectant byproducts," Richardson said.

Due to health threats, scientists have been working toward solutions to detect urine in pools.

"Dr. Xingfang Li's group at the University of Alberta in Canada has used artificial sweeteners like sucralose (Splenda) to know when people are peeing in the pool," Richardson said.