Europe winter forecast: UK to Germany on alert for wind storms; Rain to ease drought, wildfires in Spain and Portugal

Winter will start with a bang across parts of northern and western Europe as frequent storms bring disruptive rain and wind.

A mild start to the season throughout much of Europe will transition to a late-season chill across parts of central and eastern Europe.

Drier-than-normal conditions will bring no relief to areas suffering drought from eastern Spain into the Balkan Peninsula. 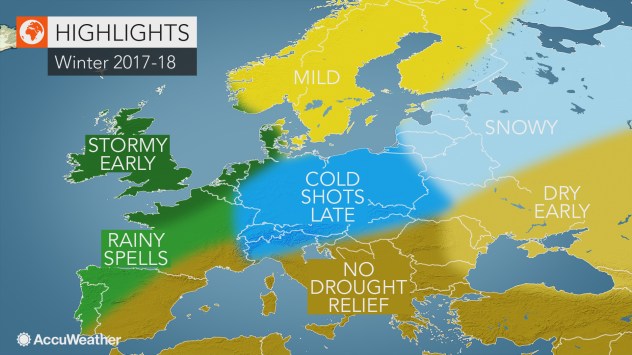 Frequent storms to bring wind and rain to the UK, France and Germany

An active start to the winter season will bring a high risk for named wind storms and other travel-disrupting storms from the United Kingdom into France, Belgium, Netherlands, Denmark and Germany.

The U.K. will be at the center of the stormy weather as frequent storms impact the country throughout the winter.

The stormiest time is expected during December and much of January before February brings some reprieve from the wind and rain.

Photos: Red sky wows the UK in the midst of Ophelia Storm Brian brings rain, wind to Ireland and UK on the heels of Ophelia Death toll surpasses 40 amid wildfire outbreak across Portugal, Spain

The strongest storms of the winter will bring widespread travel disruption along with significant power cuts.

The frequency of these storms will also heighten the risk for stream and river flooding from late December through the middle of January.

Anyone living in or traveling to the United Kingdom this winter will want to make preparations for these powerful storms well in advance. 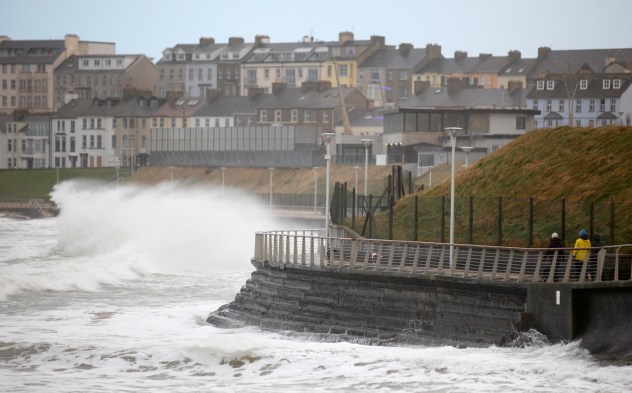 While wind storms will not be as frequent from France into Germany, several powerful storms are expected during the winter months.

"With any of the wind storms during the heart of winter, snow will be possible over Scotland and the higher elevations of the U.K. and also into parts of southern Germany and eastern France," AccuWeather Senior Meteorologist Alan Reppert said.

"The combination of wind and snow can create dangerous travel conditions," he said.

Widespread travel and power disruptions are expected during the strongest storms with the potential for structural damage in the hardest-hit areas.

"Coastal flooding will be a concern as well, especially with the bigger storms and this could lead to further beach erosion across western coastal beaches that have been dealing with this for the last few winters," AccuWeather Meteorologist Tyler Roys said.

Near- to above-average temperatures will prevail throughout central Europe in December and much of January before winter finally arrives during the end of the season.

This mild air will be welcomed by anyone hoping to enjoy outdoor activities before having to break out winter coats.

Those anxiously waiting for cold and snowy weather in hopes of hitting the ski slopes may have to wait until the second half of the season.

High pressure building over Scandinavia during this time will help to direct cold Siberian air westward across the Baltic states and Belarus before settling into Poland, Germany and the Alps.

These cold shots will send temperatures below normal and set the stage for some late-season snowfall at lower elevations from Germany to Poland. 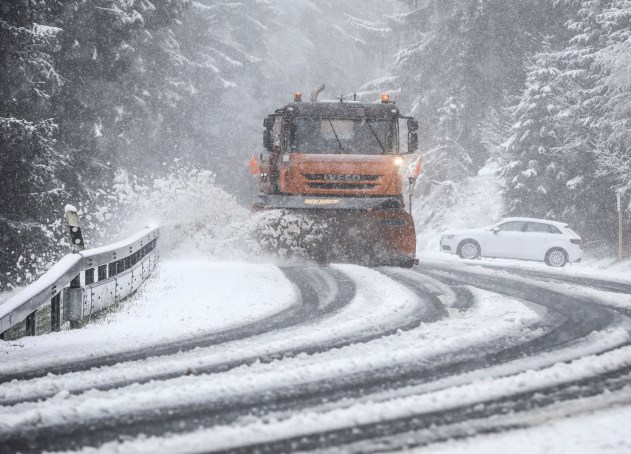 A snowplow clears the street at the Grosser Feldberg mountain near Schmitten. Germany, Monday, April 17, 2017. (Frank Rumpenhorst/dpa via AP)

Despite the mild start to winter, an active storm pattern will still promote frequent snowfall during December and January across the Alps, including many of the major ski resorts in France, Switzerland, Italy and Austria.

"Snow over parts of Germany and the Alps looks to be quite heavy for the end of the season, and this will keep ski slopes open longer into the spring," Reppert said.

While northern Europe will endure a wet winter, infrequent rainfall is predicted from southern and eastern Spain through much of Italy and the Balkan Peninsula.

Even though parts of Italy and the Balkan Peninsula received beneficial rainfall this autumn, more is needed in these areas to alleviate the severe drought conditions that developed during the summer.

"That's not to say that there will be no rainfall in these areas during the winter months; however, rainfall is expected to be lacking overall and will further exacerbate the ongoing drought," Reppert said.

Many of these areas will be in a worse drought exiting the winter than entering it, which could have significant impacts on agriculture in 2018 due to poor soil moisture during spring. 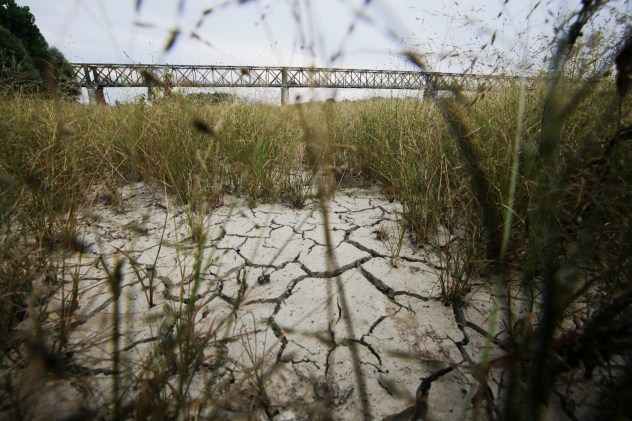 A view of the Po riverbed under Ponte della Becca (Becca bridge) shows the effects of the drought, near Pavia, Italy, Monday, July 24, 2017. (AP Photo/Luca Bruno)

"Crop rationing could be an issue again because of the lack of rain during the winter season," Roys said.

The lack of winter rainfall may also heighten the risk for wildfires next summer an autumn if spring rainfall also fails to reach normal levels.

Below-normal precipitation across the Balkans will also result in less snowfall in both the mountains and lower elevations compared to normal.

While snowstorms are expected to be few and far between this winter, the most likely time for one to occur will be during the second half of the season.

The most likely area to get beneficial rain will be across northern and western Spain as well as Portugal, as Atlantic storms bring occasional rainfall throughout the winter.

This rainfall will help ease drought conditions across the region and also lower the wildfire threat following numerous deadly outbreaks during the summer and autumn.

If the storm track is able to extend southward for a period during the heart of the winter, this beneficial rainfall could expand across the rest of Spain.

Cold air to set the stage for snowy winter across Baltic states, Belarus; Scandinavia to dodge the chill

Despite a mild start to winter across eastern Europe, change will be felt across the Baltic states and Belarus as occasional cold shots arrive in December.

"Even if winter is delayed in the east, snowfall will generally be around normal for places across Poland, the Baltic States and Ukraine," Roys said.

As the shots of cold air become more frequent, the likelihood of snowfall will also rise and result in extended periods of snow on the ground from Estonia to Belarus.

Locations from eastern Romania to Moldova and Ukraine will have a dry and mild start to winter. As the season progresses, more typical winter chill will set in bringing the threat for multiple snow events.

While cold air builds across parts of eastern and central Europe later this winter, Scandinavia will have little in the way of lasting cold, as above-normal temperatures prevail throughout the season.

Atlantic storms will occasionally lash the region early in the season pulling mild air into Norway, Sweden and Finland.

High pressure building over the region during the second half of winter will act as a shield against any arctic intrusions as the coldest air settles farther south and east.

"Just because the winter will be a mild one does not mean snow won't accumulate across the Scandinavian lands. It only means the amount of snow days will be below average for many locations," Roys said.