Eclipse day timeline from coast to coast: When will you see the total solar eclipse?

The path of this shadow, the path of totality, is where observers will see the Moon completely cover the Sun for about two and a half minutes on August 21.

This video shows a close-up look at the shadow of the moon as it passes across the United States. The time of totality is shown at the top left of the video.

The biggest celestial event of 2017 will take place on Monday, Aug. 21, but you may miss it if you do not know precisely when to look.

The moon’s shadow will travel from the West Coast to the East Coast of the United States with only a narrow zone, called the path of totality, experiencing a total solar eclipse.

In this path, the moon will block out the sun completely for less than three minutes, so being in the path at the correct time is extremely important. 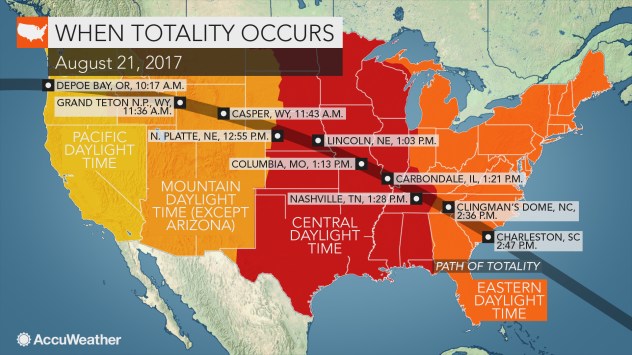 The first people in the country to see the eclipse will be along the coast of Oregon where the moon will start to block out the sun around 9:04 a.m. PDT and will completely cover the sun by 10:17 a.m. PDT.

Portland and Eugene, Oregon, sit just outside of the path of totality, so people looking to the sky in these cities will experience a partial solar eclipse with the moon blocking out 99 percent of the sun. 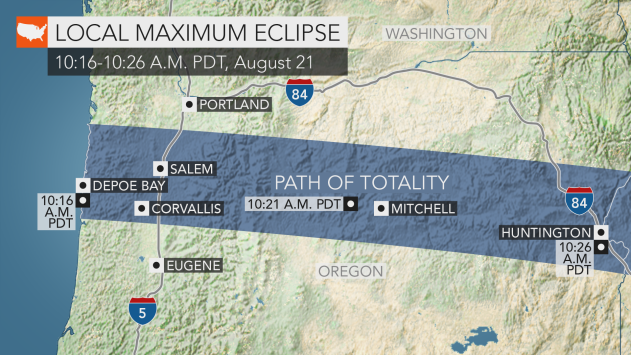 The shadow of the moon will make its way eastward as the day progresses.

The eclipse will begin in Grand Teton National Park, Wyoming, at 10:16 a.m. MDT, with the moon blocking out the sun completely by 11:36 a.m. MDT.

The neighboring Yellowstone National Park will not experience a total solar eclipse. During the height of the eclipse, spectators in Yellowstone will still see a small sliver of the sun as the moon blocks out 98 percent of the sun's light.

Casper, Wyoming, is one of the bigger cities in this part of the country that will experience a total solar eclipse around 11:43 a.m. MDT.

As the moon’s shadow tracks across the heartland of the U.S., it will pass over several cities, including Lincoln, Nebraska, Kansas City and St. Louis.

People in these cities will need to plan accordingly as each city is right on the edge of the path of totality. This means that part of the cities will experience a total solar eclipse, while other portions will not.

Carbondale, Illinois, is also situated in this part of the country and will be a popular location on Aug. 21, as it will experience totality for a little over 2 minutes and 40 seconds, longer than anywhere else in the country.

The southeastern U.S. will be one of the most popular areas in the country for viewing the eclipse on Aug. 21. It is the closest place for the millions of people along the East Coast to experience the total solar eclipse.

The eclipse will occur early in the afternoon across this region, but spectators should arrive at their viewing location in the morning due to the volume of people traveling to see the celestial event.

AAA is reminding drivers not to stop along the highway to watch the event and not to wear eclipse glasses while driving. 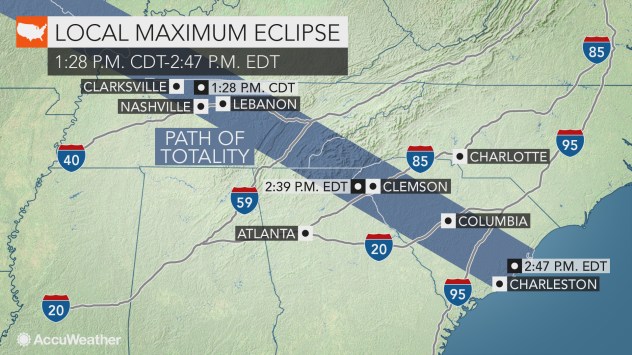 Coastal areas of South Carolina will be the final place in the United States to experience the total solar eclipse, with the peak eclipse occurring around 2:47 p.m. EDT and the shadow of the moon moving offshore shortly after 4 p.m. EDT.

This will not be the end of the eclipse, as the shadow of the moon continues over the Atlantic Ocean.

A select few aboard a Royal Caribbean cruise will be some of the final people in the world to view the eclipse as the ship sails through the path of totality.

For the exact times that the eclipse will be visible across the world, check out NASA’s interactive eclipse map.

Click on the banner above to visit AccuWeather's center for the Great American Eclipse.