The soggy weather is expected to spread from eastern Texas to the Carolinas.

Following a snap of dry Arctic air that gripped the region during midweek, a developing storm system will spread rain across the drought-stricken Southeast later this week.

A persistent area of high pressure that lingered over the region through late summer and into fall has led to an expansive area of moderate-to-severe drought across the Southeast. 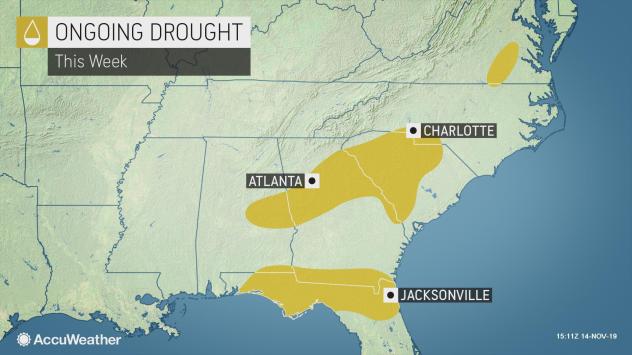 Tallahassee, Florida; Montgomery, Alabama; Macon, Georgia as well as Columbia, South Carolina, can all expect beneficial rainfall as a storm system tracks across the area. The storm took shape on Thursday as an upper-level wave of energy tracked out of northern Mexico and into the western Gulf of Mexico.

A clash between the remaining cold Arctic air in place across the South and the warm air mass suppressed over the Gulf will provide the conditions necessary for a strengthening storm system to take shape. 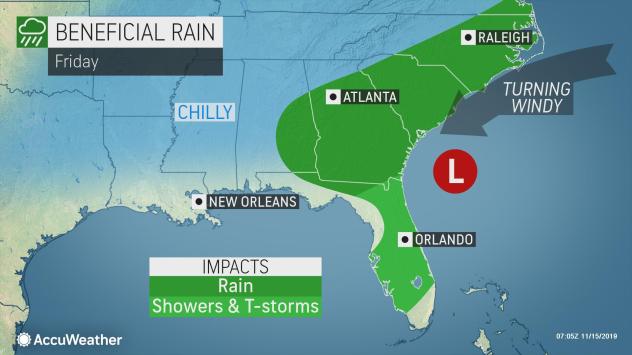 A cold rain spread across southern and eastern Texas on Wednesday night as the storm system began to take shape. A small number of locations reported a bit of sleet on the northwestern flank of the rain.

Motorists on Interstate 10 between Houston and New Orleans had to keep the windshield wipers working through Thursday night as the cold rain continued.

The storm system continued to intensify as it tracked eastward through the Gulf. During Thursday evening, rain overspread the southern Atlantic seaboard.

Rainfall totals will likely be higher across the Southeast into the start of the weekend. 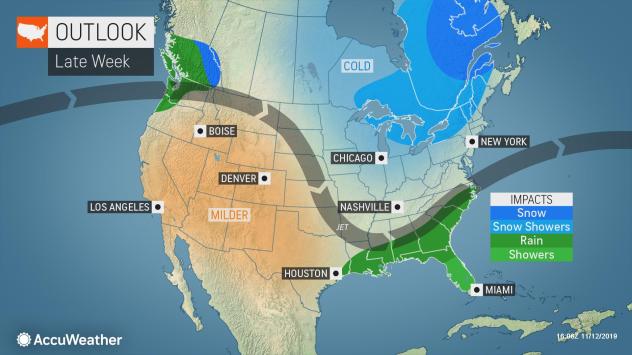 This storm system is not expected to be a total drought-buster by any means for the region, but a swath of 0.5 of an inch to 2 inches of rain across the region will surely help.

"This rain will generally be beneficial, especially in Florida and Georgia, where drought is ongoing. However, localized flooding will still be possible." AccuWeather Meteorologist Ryan Adamson stated.

Depending on the amount of intensification in the Gulf, localized amounts of 2 to 3 inches are possible from the Panhandle of Florida into southern Georgia by Saturday. An AccuWeather Local StormMax™ of 5 inches is anticipated along the immediate Carolina coast.

The center of the storm system is expected to take a track across Florida into the Atlantic by early Friday.

The storm will continue to spread periods of rain to areas along the southeast coast through Friday night. Along the coast gusty winds will begin to increase and can lead to areas of coastal flooding. 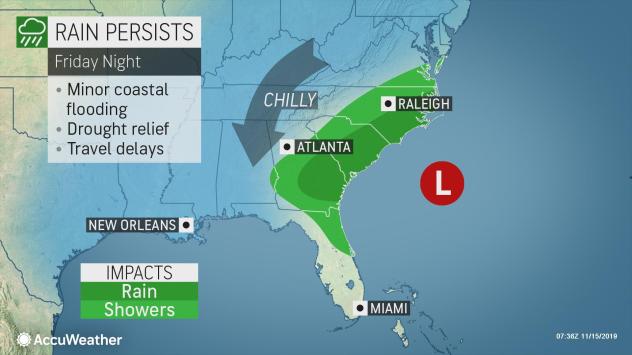 Further intensification in the Atlantic will then shift the threat for heavy rain, rough surf and beach erosion along the East coast as a nor'easter begins to take shape this weekend.

As the storm system churns along the Atlantic coast this weekend, a northerly wind on the back side of the storm system will usher chilly air across the Southeast. Even portions of central and South Florida inland from the coasts could have overnight low temperatures dip down to the upper 40s and lower 50s. 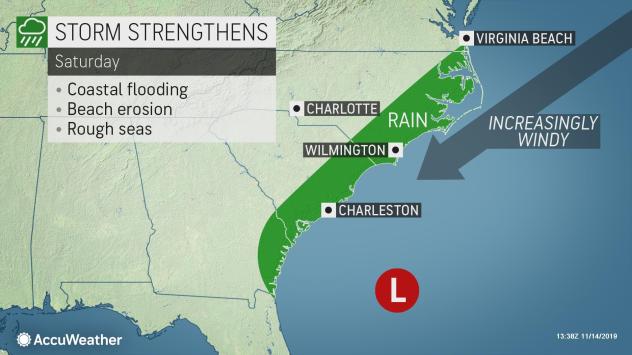 Looking ahead to next week, a similar pattern in the upper levels of the atmosphere will bring a chance for another storm system across the Southeast, further helping the drought conditions.

Download the free AccuWeather app to get the latest updates on the storm and how it might affect your area. Keep checking back on AccuWeather.com and stay tuned to the AccuWeather Network on DirecTV, Frontier and Verizon Fios.