Dorian to strengthen through Labor Day weekend, make US landfall as major hurricane

AccuWeather Chief Video Meteorologist Bernie Rayno discusses the latest forecast of Dorian and what factors could influence where the storm will make landfall.

This story has been updated. For the latest information follow this link.

While Dorian slowly grew in size, becoming a Category 2 storm late Thursday over the warm waters of the Atlantic, interests in the Bahamas and U.S. continued to intensify preparations ahead of the storm's expected landfall as a major hurricane as forecasters warned of potentially devastating winds, storm surge and heavy rain.

The National Hurricane Center said during its 8 a.m. Friday advisory that Dorian's maximum sustained winds increased to 110 mph. Dorian, located about 255 miles east-northeast of the southeastern Bahamas, was moving northwest at 12 mph early Friday morning. A hurricane watch has been issued for the northwestern Bahamas.

As Dorian, the second hurricane of the Atlantic season, tracks north of the Bahamas later this week, it is expected to reach Category 4 hurricane strength before approaching the southeastern United States coast. 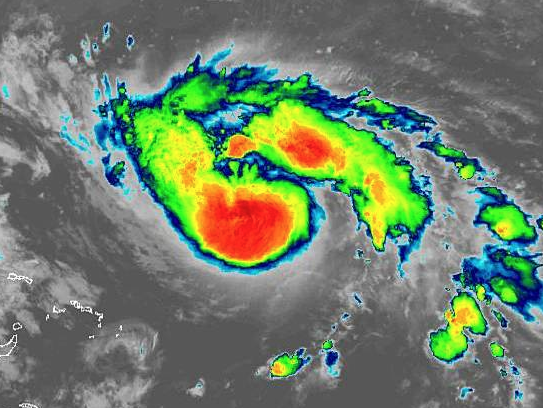 "The strengthening to a major hurricane is projected to occur while Dorian makes a more westward turn toward the northern Bahamas this weekend," according to AccuWeather Senior Meteorologist Alex Sosnowski.

"With Dorian forecast to pass over the extremely warm water of the Gulf Stream, where cooled, up welled water is rapidly replaced by more warm water, you have to be concerned that a Category 5 storm is on the table before reaching the U.S. coast," Sosnowski said.

A Category 5 hurricane has maximum sustained winds of at least 157 mph.

The storm made a shift to the north on Wednesday causing its center to regenerate northeast of Puerto Rico and putting forecasters on alert for development of the Atlantic's first major hurricane of the 2019 season.

On Wednesday, Florida Gov. Ron DeSantis declared a state of emergency to give officials enough time to prepare for the storm and urged all Floridians on the state's east coast to "have seven days of supplies, prepare their homes and follow the track closely." Georgia followed suit on Thursday, declaring a state of emergency in 12 counties.

President Donald Trump has canceled an upcoming trip to Europe due to the impending hurricane.

"To ensure that all resources of the federal government are focused on the storm, I have decided to send Vice President Mike Pence to Poland this weekend in my place. It's ... very important for me to be here. This storm looks like it could be a very, very big one indeed," he said at a Rose Garden gathering to establish the U.S. Space Command.

The hurricane brought waves of heavy rain to Puerto Rico and parts of the U.S. and British Virgin Islands on Wednesday after it battered portions of the Lesser Antilles on Tuesday.

The International Space Station flew over Dorian on Thursday afternoon and caught video of the storm as it swirled northwest of Puerto Rico.

On Thursday afternoon, the International Space Station flew over #HurricaneDorian and recorded this video of the strengthening storm from space: https://t.co/yk9aUjSxZd pic.twitter.com/q9l6ZTq6O4

AccuWeather meteorologists are forecasting Dorian to intensify into a major hurricane before making landfall as a Category 4 hurricane.

The longer the amount of time Dorian spends over the warm, open waters of the Atlantic, away from major land areas, the greater the chance of significant strengthening. 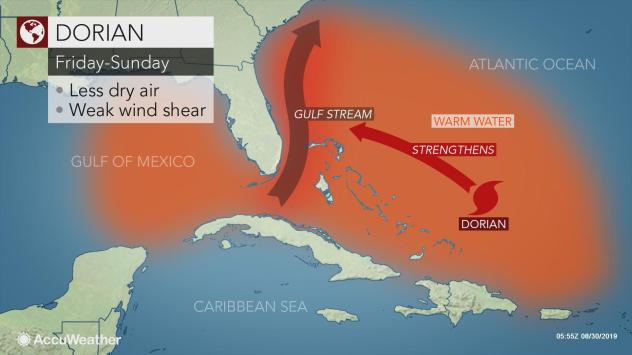 Cruise and shipping interests from Florida to the waters just north and east of the Bahamas should prepare for hurricane conditions with mountainous seas and high winds.

Some of the far northern islands of the Bahamas will be significantly impacted while the majority of the others will get barely a breeze and a little rain.

"People on Abaco and Grand Bahama should prepare for major hurricane conditions to spread westward over the islands spanning Saturday night and Sunday," Sosnowski said.

"While the exact track of Dorian will determine how severe conditions get on these two major islands in the chain, Cornishtown, Bahamas, near the northernmost point on Abaco could be a hard-hit area," he added.

With several days over the open waters of the Atlantic still to go, the exact track of Dorian for the weekend and beyond is not set in stone. 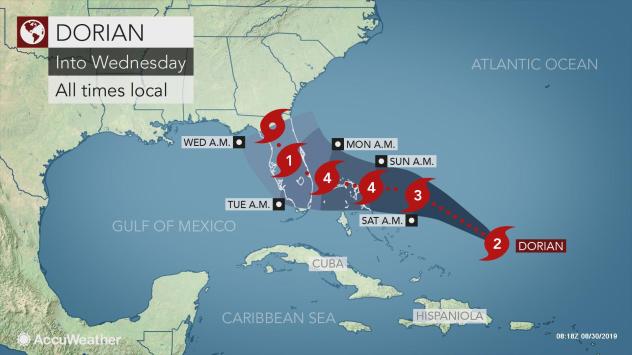 As a precaution, officials have moved this Saturday's Florida State/Boise State football game from Jacksonville, Florida, to Tallahassee, Florida, at noon the same day.

"A very small fluctuation in the overall weather pattern will have a large influence in where Dorian ultimately tracks and how it impacts the continental U.S.," said AccuWeather Senior Meteorologist Adam Douty.

Other factors in the atmosphere through the weekend, from a high pressure over Bermuda to a non-tropical storm in the central U.S., could open up the possibility for potential impacts in locations from South Florida to the Outer Banks.

This could influence whether Dorian tracks westward into Florida or slows before reaching the Florida coast and makes a turn to the north. 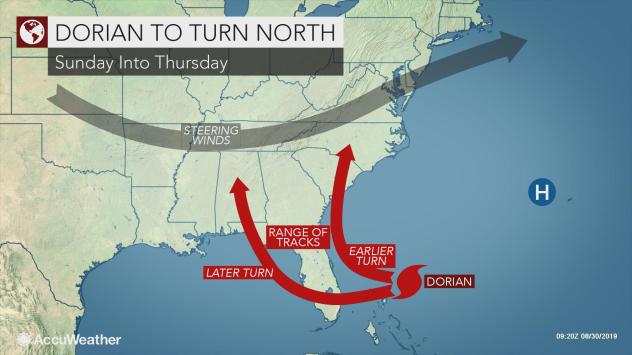 "If Dorian does slow and turn to the north, impacts in the Carolinas would be much more significant while Florida would be spared from major damage," Douty added.

At this time, AccuWeather believes a landfall over the middle of the Atlantic coast of Florida is most likely.

Now is the time to make sure you have a preparedness plan. Visit AccuWeather Ready for more information on how to be prepared for hurricane season.

"Some things people can do is to stock up on non-perishable items that don't have to be heated prior to eating, such as some canned goods, cereals, etc." Sosnowski said.

6 ways to prepare now for hurricanes Don’t wait until it’s too late: 5 expert tips for getting your finances in order before a natural disaster strikes Why you should evacuate ahead of a hurricane While Puerto Rico avoids direct hit, Virgin Islands take significant blow from Dorian Dorian to unload feet of rain, trigger major flooding in southeastern US

People may want to give the ice box technique, from the pre-electricity era, a try as the power could be out for days or even weeks in the wake of the storm.

As Dorian approaches, conditions will deteriorate first along the southeastern U.S. Atlantic coastlines, with increasingly rough surf and rip currents.

The drenching showers and gusty thunderstorms will precede the arrival of the core of the storm by hours.

Rainfall will increase and spread northwestward over the Florida Peninsula during the holiday weekend, ahead of landfall sometime Monday, depending on how far north the tropical cyclone wanders beforehand. 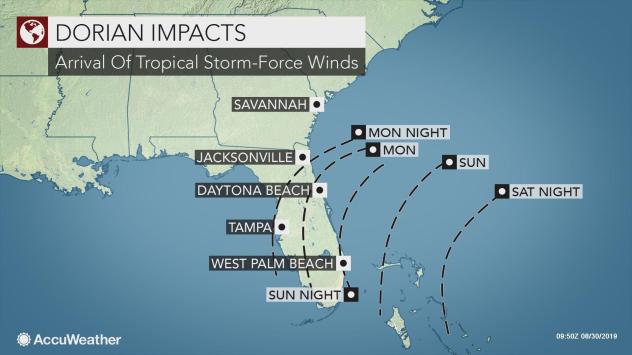 By the time Dorian reaches the U.S., the overall size of the storm may be somewhat larger and its impact will reach farther, when compared to the compact system that swept through the Caribbean. This could bring a wider range of impacts from southern Florida to Georgia and the Carolinas.

Locations near landfall should prepare for Dorian to be a 4 on the AccuWeather RealImpact™ Scale For Hurricanes. However, that may change depending on the intensity, forward speed and size of the hurricane. 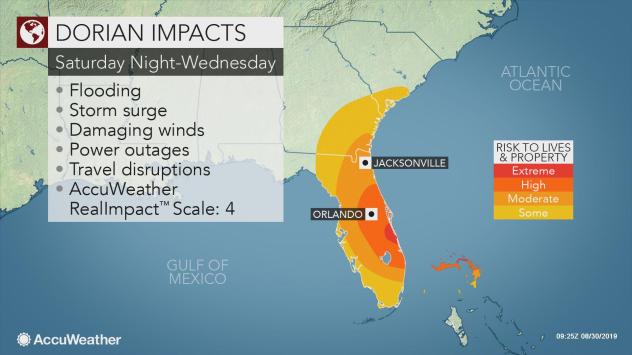 "Even if an eye wall replacement cycle were to take place just prior to making landfall, which may reduce the strength of the storm by a category or two, the overall impact can be much greater due to the overall scope of the storm," Kottlowski said.

Once making landfall, should Dorian remain over land, the system may slowly weaken and rain itself out over the southeastern corner of the U.S. through early next week.

AccuWeather meteorologists say rainfall over much the central and northern part of the Florida Peninsula is expected to range between 8 and 16 inches with an AccuWeather Local StormMax™ of 24 inches.

However, if Dorian is influenced by other weather systems moving through the eastern U.S., it could be drawn northward along the Eastern Seaboard next week, affecting locations from the coast to the Appalachians.

Dorian could also turn more to the west and reach the Gulf of Mexico, providing another period of strengthening and a wider range of impacts next week. In this case, the overall impacts of the storm on U.S. interests surrounding the Gulf of Mexico will be re-evaluated.