Spring is finally here, but that also means blood-thirsty ticks are out in full force. Beware of these different types of ticks.

Areas that have had harsh winter weather are most likely looking forward to the summer months that are filled with sunshine and warmth. But with sunny, warm weather comes bugs, ticks included.

The common thought is that a harsh winter will mean that ticks won't be as bad as they could be in the summer. However, experts say this isn't entirely true.

Cold weather only kills about 20 percent of the tick population, according to a newsletter from the Pennsylvania Department of Conservation and Natural Resources (DCNR).

In controlled labs, ticks die in the temperature range of minus 2 and 14 F. Joyce Sakamoto, a research associate in the department of entomology at The Pennsylvania State University, said this doesn't take into consideration other factors that a natural environment would have. 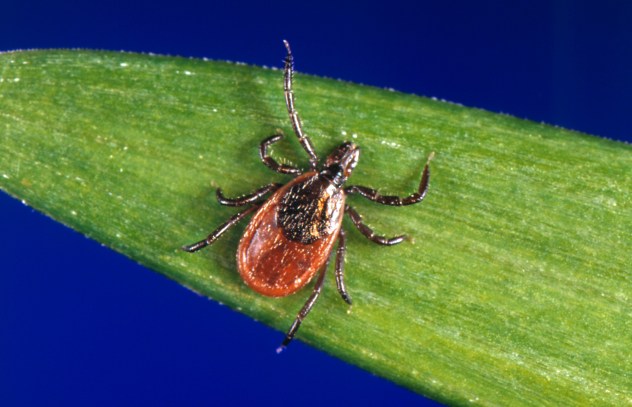 This U.S. Centers for Disease Control and Prevention (CDC) photo shows a blacklegged tick - also known as a deer tick. (CDC via AP)

"The blacklegged tick or the deer tick that everybody is concerned about, that one can handle the cold. It has sort of an antifreeze ability, so that it can withstand cold temperatures,” Sakamoto said.

“Now, if you put them right into the freezer, they will die,” Sakamoto said. “But, in reality that’s not how they’re exposed to the cold. They’re not exposed to complete constant temperature at a particular level that’s going to kill them outright.”

Sakamoto said what is more likely is ticks will burrow themselves into the leaf litter and the soil, which acts as an insulation.

If there is a consistent layer of snow, it can also act as an insulation where adult ticks will still be able to survive winter.

How to avoid getting bitten by a tick
How to safely remove ticks from skin
Lyme disease signs and symptoms: When should you seek medical care?
Insect world begins to awake from its winter slumber as spring nears

Sakamoto said that unless they just happen to be going some place that has a lot of water—because then the water will turn to ice and the ice will then freeze them—generally the cold weather doesn’t seem to have any major influence on them.

Some studies have shown that what kills ticks off isn’t just that it gets too cold, but the amount and the severity of temperature changes. This is because the warmer it gets, the more ticks will come out. But if it suddenly gets cold, it might kill them before they can get back to warmth and safety.

Sakamoto points out that when there is a warm spell in the middle of February, people are looking to get out of their houses and be outside. When they come back in, they don't think to check for ticks. She stresses that it's not necessarily that there are more or less ticks, but that people aren't being as careful as they should be because it has been cold.